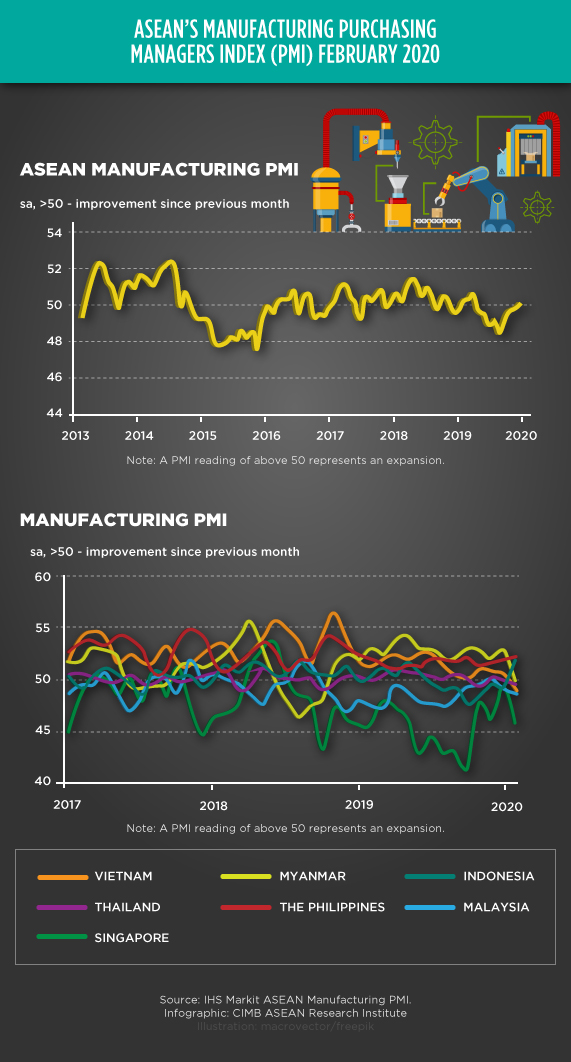 ASEAN manufacturing conditions show small improvement for first time in nine months
(3 March 2020) Operating conditions in the ASEAN manufacturing sector marginally improved for the first time in nine months, according to a UK-based information company’s purchasing managers’ index (PMI) data. In February 2020, the headline PMI for the region increased to 50.2 from 49.8 in the previous month (a PMI reading of above 50 represents an expansion). This slight increase since May 2019 signalled the first improvement in the ASEAN manufacturing sector. The Philippines recorded the best performance in February among the ASEAN countries monitored. Its PMI of 52.3 showcased the fastest improvement in operating conditions since December 2018 while Indonesia’s PMI rose for the first time in eight months to 51.9. The rest of the ASEAN countries monitored saw deterioration of varying degrees. According to the UK-based information company, firms remained, on average, positive that output would increase in the coming year but overall optimism slipped to a four-month low.

Muhyiddin Yassin sworn in as eighth Malaysian PM
(2 March 2020) Parti Pribumi Bersatu Malaysia president Tan Sri Muhyiddin Yassin has been appointed by Malaysia’s King, Sultan Abdullah Sultan Ahmad Shah, as Malaysia’s eighth Prime Minister. Muhyiddin was sworn in at Istana Negara on 1 March. He succeeds Tun Dr Mahathir Mohamad who had been the interim prime minister after resigning as the seventh PM on 23 February due to the political crisis. In Muhyiddin’s first address to the nation on 2 March, he asked the Malaysian people to allow him a chance to rule. Malaysia has since delayed its parliamentary sitting which was initially scheduled for 9 March to 18 May. In a statement dated 5 March, the Prime Minister’s Department said the two-month postponement was needed to give reasonable time for the Cabinet line up to understand the duties of the ministries and the respective departments.

Malaysia’s central bank cuts OPR to 2.50% as COVID-19 weakens global economy
(3 March 2020) Bank Negara Malaysia (BNM) has decided to reduce the overnight policy rate (OPR) by 25 basis points to 2.50% to provide a more accommodative monetary environment amid the global COVID-19 outbreak. The ceiling and floor rates of the OPR corridor are therefore reduced to 2.75% and 2.25% respectively. According to BNM, the ongoing COVID-19 outbreak has disrupted production and travel activities, particularly within the region and this has also led to greater risk aversion resulting in tighter financial conditions and a resurgence in financial market volatility. The central bank added that the Malaysian economy grew at 4.3% in 2019 and that future growth, particularly in the first quarter of 2020 (1Q2020) will be affected by the COVID-19 outbreak and weakness in the agriculture sector is also likely to persist in 1Q2020. This OPR cut is the second so far for 2020. On 22 January, BNM reduced the OPR to 2.75%.

Indonesia’s central bank confident economy can grow 5.4% despite COVID-19
(2 March 2020) Bank Indonesia (BI) said the country’s economic growth of 5.4% could still be achieved despite the ongoing COVID-19 outbreak. The central bank had previously cut its economic growth projection for 2020 to the range of 5.0%-5.4% from the earlier projection of 5.1%-5.5%. In 2019, the country’s GDP grew 5.02%, its weakest in four years. Bank Indonesia Economic and Monetary Policy Department director IGP Wira Kusuma said on 29 February that BI’s decision to lower its benchmark interest rate by 25 basis points to 4.75% was one of the ways it can achieve the economic growth target. He added that the government should optimise state budget allocations and conduct structural reforms to support growth through fiscal policy. The virus outbreak has affected Indonesia’s economy especially since China contributed US$2.38 billion foreign exchange in the country with a market share of 14.1% of its total foreign exchange. The country also welcomes around 2 million tourists from China annually and according to a minister, the outbreak has caused an estimated loss of around US$500 million to its tourism sector.

COVID-19 outbreak dims Singaporean job market outlook in 2020
(5 March 2020) Singapore’s manpower ministry said it would be difficult to sustain the same momentum achieved in 2019 for this year due to the COVID-19 outbreak. Government data showed that a total of 63,200 jobs were created in 2019, the highest number of jobs created since 2014. However, Singapore’s manpower minister Josephine Teo warned that it will be difficult to sustain the momentum in 2020. To address the challenges to the economy, the Singaporean government has allocated US$4.02 billion to support businesses and households during the outbreak. From that amount, US$1.7 billion has been allocated to help companies pay wages and retain workers. Singapore has been viewed by several analysts as economically vulnerable to the virus spread due to its close economic links with China, which is its largest export market and biggest source of international tourists.

Indonesian automotive exports on an upward trend since 2018
(5 March 2020) Indonesia’s car exports have been on an upward trend since 2018, overcoming a sluggish global automotive industry in 2019. Indonesia exported a total of 332,000 CBU (Completely Built Up) units in 2019, an increase of 25.5% from 2018 while exports of CKD (Completely Knocked Down) vehicles reached 511,000 kits, an increase of 523.5% from 2018. Domestically, the car industry has been impacted by the global economic slowdown, with sales in 2019 falling by 10.8% to only 232,000 units. In view of the positive trend, Indonesia’s Industry Ministry has set a target of 1 million units of CBU vehicle exports by 2024. Meanwhile, the domestic automotive sector is expected to grow by 6% in 2020.

Lao government borrows US$22.5 million from World Bank to address rural poverty
(5 March 2020) The Lao government has borrowed US$22.5 million from the World Bank via a low-interest loan to fund a programme that would address nutrition improvement and poverty reduction in four northern provinces from 2020-2024. The programme will target the provinces of Huaphan, Xieng Khuang, Phongsaly and Oudomxay during that period. The government also intends to invest US$1.46 million in agricultural infrastructure in the provinces of Luang Namtha, Luang Prabang, Savannakhet, Saravan, Xekong and Attapeu provinces. These programmes form part of the government’s five-year socio-economic strategic development plan which focuses on rural areas and broader national poverty reduction.

Number of tourists to Angkor Archeological Park fall 37% in first two months of 2020
(3 March 2020) Cambodia’s most popular tourist destination, the Angkor Archeological Park, received a total of 341,494 foreign visitors in the first two months of 2020, down 37% over the same period last year. The share of tourist arrivals from China during the same period constituted only 2%. Revenue made from ticket sales of the park also fell 35% to US$16.2 million during the January-February period this year. The decline in visitors and revenue was attributed to the COVID-19 outbreak. Cambodian Prime Minister announced on 24 February that the government would provide tax breaks for all hotels and guesthouses in northwestern Siem Reap province (where the park is located) from February until May 2020.

Singapore aims to cut 2030 peak emissions by 2050
(29 February 2020) Singapore is aiming to halve the amount of carbon emissions it produces from its 2030 peak by the year 2050, with the goal of achieving net-zero emissions “as soon as viable in the second half of the century,” according to Senior Minister Teo Chee Hean. He noted that it would be challenging for Singapore to emit just 33 million tonnes of carbon dioxide equivalent by 2050, considering its limited access to renewable energy options. While Singapore’s share of global emissions only amounts to 0.11%, Teo said it was important to take action since the effect of climate change on the country will be disproportionately large and existential. The government plans to capture more energy from the sun and phase out internal combustion engine vehicles by 2040. It will also invest in research on emerging low-carbon and carbon capture utilisation and storage technologies, as well as collaborate with the international community in establishing carbon markets and regional power grids. In the nearer term, Singapore wants its emissions to peak at 65 million tonnes by 2030. This would mean that even if the economy continues to grow, the amount of emissions produced should not.