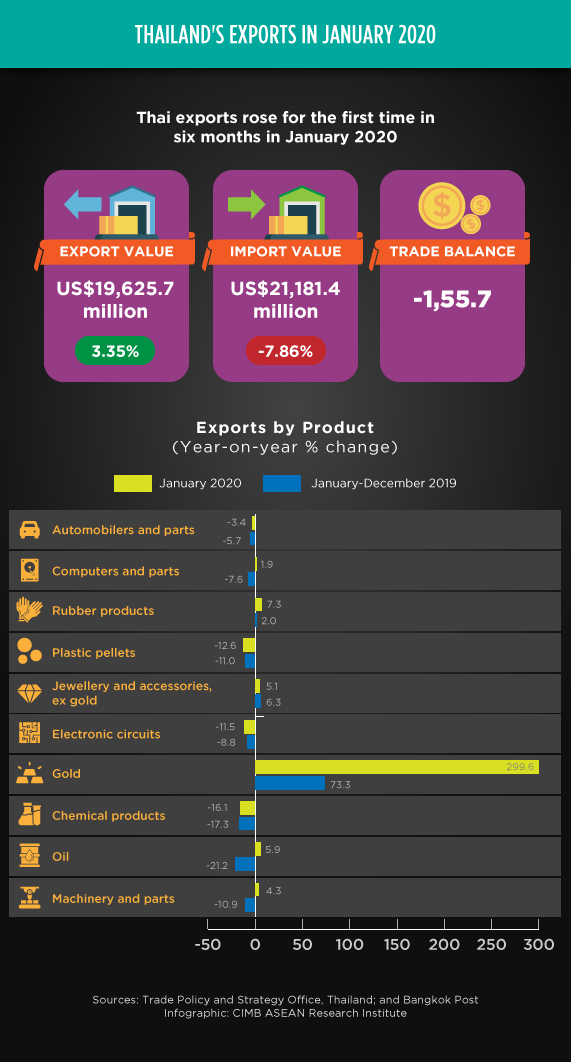 Growth forecasted for Thai exports in 2020
(25 February 2020) The Thai government remains upbeat on overall exports remaining positive in 2020 despite several negative factors including the COVID-19 outbreak. According to the Trade Policy and Strategy Office, exports are forecasted to grow between 0%-2% this year if shipments average between US$20.6-US$21.0 billion a month. The weakening baht is expected to improve price competitiveness for certain products while trade missions set up by Commerce Minister Jurin Laksanavisit in South Africa, the Middle East, Russia, Britain, Germany, Australia, Vietnam, Cambodia, Bangladesh and India are expected to help boost export growth. The Commerce Ministry also aims to conclude ongoing free trade agreement (FTA) negotiations with Turkey, Pakistan and Sri Lanka, and prepare for potential FTA negotiations through more comprehensive partnerships. On 24 February, the Commerce Ministry reported that customs-cleared exports rose 3.35% year-on-year in January 2020, fetching US$19.6 billion. This was the first rise in six months and was largely driven by higher shipments of oil and gold.

Malaysian government introduces US$4.7 billion stimulus package
(27 February 2020) Malaysian interim Prime Minister Tun Mahathir Mohamad unveiled a US$4.7 billion stimulus package to offset the negative impacts of the COVID-19 outbreak. Among the measures introduced included requiring banks to postpone payments or reschedule loans, service tax breaks for hotels, the central bank’s provision of US$474 million guaranteed financial aid to SMEs at 3.75% interest, and import duty and sales tax exemption on importation or local purchase of machinery and equipment used in port operations for three years. The Malaysian government expects economic growth in 2020 to range between 3.2% and 4.2%. After a political crisis triggered on 23 February, Malaysia currently has no sitting government after its King, the Yang Di-Pertuan Agong accepted Mahathir’s resignation as the seventh prime minister on 24 February. Mahathir was subsequently appointed as interim prime minister and will serve in the role until the appointment of the next cabinet.

The Philippines expected to experience slower growth in first quarter of 2020/a>
(27 February 2020) The Philippines is forecasted to experience slower growth in the first quarter of 2020 due to the effects of the COVID-19 outbreak, according to a UK-based think tank. While the Philippines is relatively insulated compared to other countries, it will be impacted by a drop in tourist arrivals from countries such as China and South Korea. The Philippines imposed a ban on travellers coming from China, Hong Kong and Macau in early February while a ban on travellers from a South Korean province heavily affected by the COVID-19 outbreak is now in force. In the fourth quarter of 2019, the Philippines’ domestic economy grew 6.4% from a downwardly revised 6.0% in the third quarter of 2019. Travel and tourism contribute 12.7% to the country’s GDP. Estimates by the National Economic and Development Authority (NEDA) made in early February noted that if the outbreak lasted for one month, 0.06% would be shaved off the country’s GDP and if the contagion lasted up to five months, the GDP would decrease by 0.3%.

EU eyes FTAs with ASEAN as a whole
(24 February 2020) The European Union has expressed interest in pursuing a number of free trade agreements with countries like Thailand in the Southeast Asian region, and eventually with ASEAN as a whole, according to EU-ASEAN Business Council Chairman Donald Kanak. Thailand and the EU have engaged in exploratory talks about a potential FTA but there has been no announcement on whether either side is willing to enter official negotiations. Among ASEAN Member States, the EU has already signed FTAs with Singapore and Vietnam and is currently in negotiations with Indonesia. An eventual FTA typically takes many years to negotiate. The EU-Singapore agreement took nine-years to conclude while the agreement with Vietnam took seven years. Kanak said although there have been interest shown with regards to an EU-ASEAN FTA, it would probably require more bilateral FTAs to be signed before the possibility of holding talks with ASEAN.

Special summit between the US and ASEAN to be held in March
(24 February 2020) The US is reportedly gearing up for a special summit with the 10 ASEAN Member States to be held on 14 March 2020 in Las Vegas. Washington is also planning bilateral meetings between US President Donald Trump with ASEAN leaders. According to analysts, the summit will be held to boost ties between the US and ASEAN. Key areas to be discussed at the summit will likely cover areas of shared concern including infrastructure development, navigation in the South China Sea, cybersecurity and international terrorism and smuggling. Separate discussions on technology, development in the Mekong region and women’s empowerment are expected to be organised as well. Anthony Nelson, director of the East Asia and Pacific practice of a global business strategy firm said the special summit is a necessary effort by the US administration to repair “hurt feelings in Southeast Asia” after President Trump missed two consecutive East Asia summits. He added that there is “eagerness” from ASEAN leaders and US policymakers to “strengthen ties, as there has been great concern in the region over Washington’s drifting interest.”

Revenue from customs and excise unlikely to meet target due to COVID-19 outbreak
(27 February 2020) Cambodia’s General Department of Customs and Excise (GDCE) is unlikely to meet its revenue target for 2020 as trade activity in the country slows down due to the COVID-19 outbreak, its director-general Kun Nhem told the press on 26 February. The 2020 National Budget Law, which was approved in November 2019, targets US$2.91 billion in customs and excise, and US$2.36 billion from taxes. “Revenue collection in January and February has already suffered from the outbreak. We hope the supply chain will recover shortly, but we cannot make any predictions,” Kun Nhem said. He added that the GDCE collected US$2.21 billion in 2019, which exceeded its target by US$1 billion. In 2019, revenue from import taxes amounted to US$593 million, up 31% from 2018, while revenue from special taxes totalled US$1.32 billion, a 33% increase. Revenue from value-added tax (VAT) rose by 29% year-on-year to US$1.15 billion. For customs and excise revenue, the largest contributors were vehicles and machinery (US$1.69 billion), petroleum and energy (US$537 million), and other products and construction materials (US$984 million).

Myanmar gold prices rise as COVID-19 spreads
(27 February 2020) Gold prices in Myanmar have risen amidst the COVID-19 outbreak, currently trading at a high of around US$867.78 per tical (1 tical is equivalent to 0.5 ounce). Domestic gold prices follow global prices, which have surged recently as investors abandon riskier investments in favour of the safe haven asset. Global gold prices hit US$1645 per ounce on 27 February, a slight reduction from the high of US$1690 per ounce earlier in the week. If the virus continues to spread, U Kyaw Win, chair of the Myanmar Gold Entrepreneurs Association, sees prices rising further to US$902.49, attracting more buyers of gold. The global gold price has hit a record ten year high due to people saving an increasing amount of gold and due to the daily price variation of between US$10 and US$40, according to the heads of other local gold entrepreneurs organisation.

Passenger arrivals in Myanmar’s international airports drop by 36% month-on-month in February 2020
(26 February 2020) Passenger arrivals at Myanmar’s three international airports have dropped by 36% in February 2020 from the previous month. This has been attributed to the travel curbs imposed because of the COVID-19 outbreak. This has been particularly pronounced when it comes to Chinese visitors, with 2,000 arrivals per week from the usual average of 30,000. Before the virus outbreak, 17 airlines flew 30 routes from Myanmar to mainland China and Hong Kong. This number has now fallen to eight airlines and seven routes. “The virus has negatively affected all airlines, routes and destinations,” Ne Win, director of air transport at the Department of Civil Aviation said in an interview on 25 February. He added that the impact of the outbreak on local airlines could last up to a year.

Thailand’s equities benchmark ranks as world’s worst performer in 2020 due to COVID-19 outbreak
(27 February 2020) On 26 February, Thailand’s SET Index fell 5.1%, the most in six years. The benchmark gauge’s 14% decline in 2020 is the most among the world’s key equity indexes, making it the worst performing equities benchmark in the world. The decline has been attributed to the COVID-19 outbreak, which has impacted Thailand’s tourism industry (particularly due to the fall in the number of Chinese tourists, its largest source of foreign visitors). Tourist income accounts for about a fifth of its economy. Overseas investors have pulled out US$1.18 billion from Thai equities in 2020, adding to the US$11 billion withdrawal it has already experienced in the previous three years.