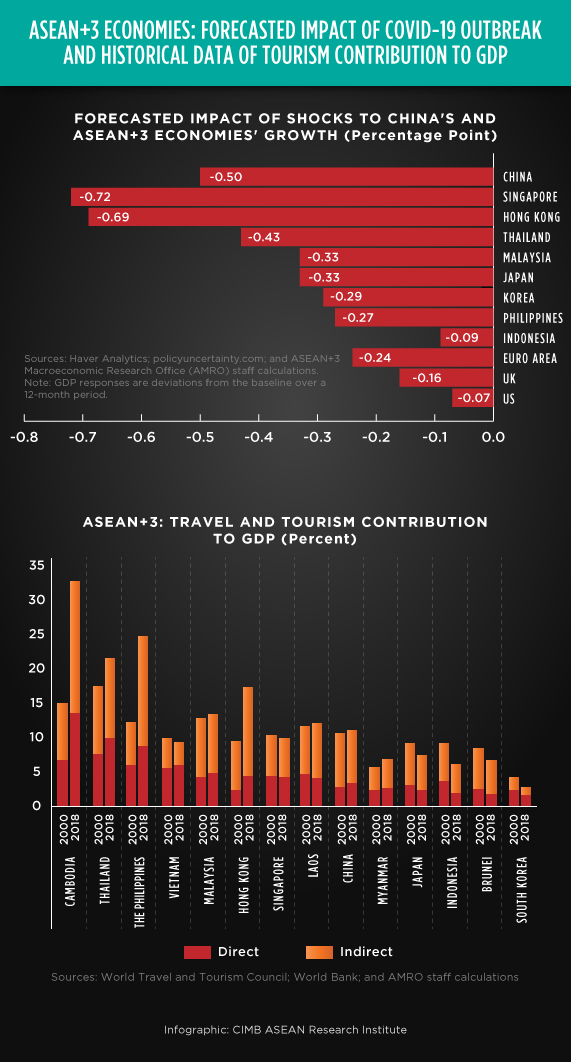 Economic fallout expected for ASEAN countries, according to AMRO
(17 February 2020) A modelling exercise by the ASEAN+3 Macroeconomic Research Office (AMRO) has estimated that China’s GDP will drop by 0.5% and ASEAN+3 (ASEAN member countries, China, Japan, South Korea) economies by 0.2% in 2020 due to the COVID-19 outbreak. For its estimate, AMRO used the assumption that the outbreak would last for four months, similar in time length to SARS but with a fatality rate that is lower coupled with a higher contagion rate. The possible factors of slow growth include a sharp drop in outbound travel and tourism from China, a decrease in intra-regional tourism, a reduction in China’s imports from the region and the spread of COVID-19 in other countries in the region. Intra-regional trade in goods is expected to be hit by demand and production disruptions in China but based on the assumptions made by AMRO of previous epidemics like SARS, the disruptions are expected to be transitory and trade is expected to bounce back in tandem with China’s demand for intermediate and final goods.

Singapore unveils support package for businesses affected by COVID-19 outbreak
(18 February 2020) Singapore will spend US$2.9 billion on a series of new measures and improvements to existing schemes to stabilise its economy which has been affected by the near-term uncertainties caused by COVID-19. The announcement was made by Deputy Prime Minister Heng Swee Keat as he presented Singapore’s budget for 2020 on 18 February. The special Stabilisation and Support Package will help workers to remain employed and assist companies with cash flow. According to Heng, the sectors that have taken a direct hit from the coronavirus outbreak, such as tourism, aviation, retail, and food services, will receive additional help. The measures to help with employment consist of two: the Jobs Support Scheme (US$ 930 million), which aims to help firms retain local workers during this period of uncertainty and the enhancement to the Wage Credit Scheme worth US$760 million, which will allow firms to provide higher wage increases to its employees. Other measures under the package include the increase in the provision of government co-funding, income tax rebates and flexible rental payments for government-managed properties.

Malaysia may spend up to US$3.6 billion for fiscal stimulus package
(17 February 2020) The Malaysian government is expected to spend up to US$3.6 billion for a fiscal stimulus package to stimulate its economy and alleviate any adverse effects from the COVID-19 outbreak, along with other external uncertainties. An academic said the government had spent more than US$1.9 billion to stimulate the economy during the SARS outbreak in 2003 and therefore expects the government to allocate a stimulus package in phases in the range of US$2.4 billion and US$3.6 billion. On 14 February, the government said Prime Minister Mahathir Mohamad will announce a stimulus package on 27 February to spur the economy which expanded at 4.3% in 2019, its slowest pace in 10 years. Finance Minister Lim Guan Eng reportedly said the stimulus package would neither be a new budget nor part of Budget 2020. According to the academic, the new initiatives under the stimulus package could be in the form of assistance to the business owners especially small and medium enterprises (SMEs), especially the ones in critical industries like tourism, transport, food and beverages and aviation.

Vietnam chairs first meeting of ACCC in 2020
(18 February 2020) The first meeting of the ASEAN Connectivity Coordinating Committee (ACCC) in 2020 was chaired by the head of Vietnam’s Permanent Mission to ASEAN, Ambassador Tran Duc Binh in Indonesia on 18 February. The meeting was primarily focused on the implementation of the 2025 Master Plan on ASEAN Connectivity (MPAC 2025). Twelve out of 15 initiatives in the five strategic fields of sustainable infrastructure, digital innovation, seamless logistics, regulatory excellence and people mobility were already in progress while the remaining initiatives are in the process of preparation. The ACCC was established to supervise the implementation of MPAC 2025 and report to the ASEAN Coordinating Council and the ASEAN Summit. The MPAC 2025 was adopted at the 28th ASEAN Summit in Vientiane, Laos in September 2016.

Thailand to decide on TPP participation around April, says Japan minister
(17 February 2020) Thailand will likely decide whether to join a revised Trans-Pacific Partnership (TPP) around April 2020, said Japan’s economy minister Yasutoshi Nishimura on 17 February. He was speaking to reporters after a meeting with Thai Deputy Prime Minister Somkid Jatusripitak in Tokyo. Nishimura hopes that the current members of the free trade agreement will decide on starting accession talks with Thailand at a ministerial meeting scheduled to take place in August 2020. The TPP, formally known as the Comprehensive and Progressive Agreement for Trans-Pacific Partnership (CPTPP), entered into force in December 2018 with 11 members after the US withdrew in January 2017. Japan, Australia, Canada, New Zealand, Mexico, Singapore and Vietnam have ratified the pact while Chile, Peru, Brunei and Malaysia have not. Nishimura noted that Chile and Peru may finish their domestic procedures soon and this would bode well as negotiations with Thailand could then be started with more countries that have ratified the pact.

Indonesian Central Bank cuts interest rate and purchases government bonds to mitigate impact of COVID-19
(20 February 2020) Indonesia’s central bank cut its key interest rate for the first time in four months due to the COVID-19 outbreak. The bank lowered its benchmark seven-day reverse repo rate by 25 basis points to 4.75%. The central bank also purchased US$2 billion worth of government bonds to combat capital outflows. Although Central Bank Governor Perry Warjiyo stated that the impact of COVID-19 will be limited, the bank nonetheless downgraded its GDP growth forecast for 2020 to between 5.0%-5.4% from 5.1%-5.5%. Indonesia is relatively shielded from the global economic slowdown due to its lack of integration with global supply chains but is expected to be impacted by low commodity prices.

Global credit watchdog trims the Philippines’ GDP growth forecast for 2020 to 6.1%
(19 February 2020) Global credit watchdog Moody’s Investors Service has trimmed the Philippine’s GDP growth forecast for 2020 by 0.1%, from 6.2% to 6.1%. This was due to the impact of the COVID-19 outbreak on economic growth in the Asia Pacific, particularly through its impact on Chinese demand and tourism, as well as supply chain disruptions. Despite the revised forecast, the Philippines is expected to remain the second-fastest growing economy in Asia (behind Vietnam). For 2021, Moody’s sees the country’s GDP growth accelerating to 6.4%. The country’s central bank has also resumed its easing cycle, slashing interest rates by 6% on 6 February.

Myanmar to allow foreigners to trade local stocks from March onwards
(19 February 2020) Myanmar is preparing to allow foreigners to trade local stocks on the Yangon Stock Exchange from March 2020 onwards, to help expand the country’s bourse. Expatriates living in the country will be allowed to trade first, with permission for other foreigners to be given later. Existing rules allow overseas investors to own a maximum of 35% of a local company. The country will also set up a second board with looser listing rules than the main market. To list on the Main Board, firms must meet 17 criteria, such as being profitable for at least two years and having at least 100 shareholders. The proposed second board will allow foreigners to trade in it, and will be set up by the third quarter of 2020. In addition, efforts are underway to allow companies to issue bonds as early as the second half of 2020.

Vietnam to increase power generating capacity over the next decade
(19 February 2020) Vietnam intends to more than double its power generating capacity over the next decade, according to new guidelines for a national energy development strategy. The country intends to boost capacity to 125-130 gigawatts (GW) by 2030, from about 54 GW currently. As one of Asia’s fastest-growing economies, Vietnam will need to tackle “severe” power shortages from 2021 onwards as demand outstrips construction of new power plants. Vietnam intends to raise its portion of renewable energy to 15%-20% by 2030, while also cutting its reliance on coal, which currently contributes 38% to the country’s power generating capacity. The country will seek domestic and foreign private investment to help fund new power plants.

Laos government pro-actively seeking to improve business environment in 2020
(19 February 2020) Laos is pro-actively seeking to improve the environment for businesses in the country, according to its Deputy Prime Minister and Minister of Finance, Somdy Duangdy. The issues that will be looked at to improve the business environment include access to finance for SMEs, minimising the time taken to register a business and bolstering the sale of goods made in Laos. In 2019, the government distributed US$11.2 million to various banks for the promotion of SMEs and this amount is expected to be increased in 2020. Somdy also called upon the Lao National Chamber of Commerce and Industry to collect requests made from the private sector and to forward them to the government. The government is also focusing on boosting macroeconomic stability and the stability of the local currency.