CARI Captures 441: Indonesia’s productivity lags behind most ASEAN countries, according to survey 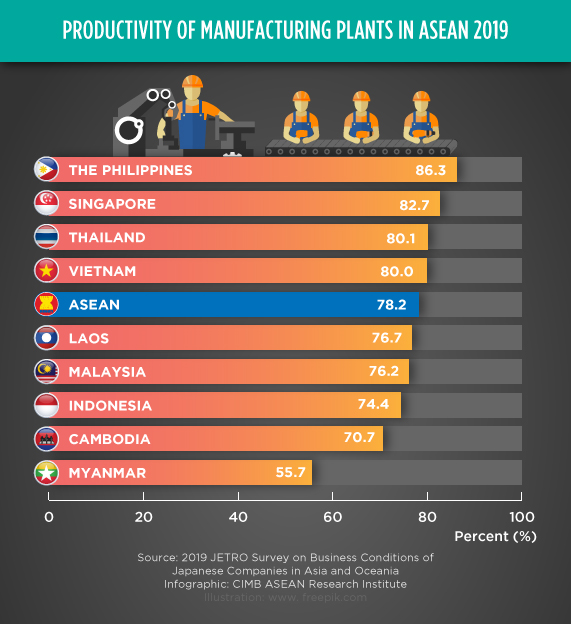 Malaysia’s 2019 GDP growth at 10-year low
(13 February 2020) Malaysia’s GDP growth moderated to 4.3% in 2019, the lowest level (according to a rebased constant of 2015) since 2009, compared with 4.7% growth in 2018. The country’s fourth quarter of 2019 (4Q19) growth slowed down to 3.6%, the lowest since the third quarter of 2009 (3Q09). The 2019 growth rate, however, was still within the range of the central bank’s target of between 4.3% to 4.8%. During a media briefing on 12 February, Bank Negara Malaysia (BNM) governor Nor Shamsiah Mohd Yunus said that 2019’s annual growth was adversely affected by supply disruptions, especially in the commodity sector, while growth was supported by resilient private sector spending and continued expansion in the services and manufacturing sectors. According to Nor Shamsiah, while “it is too hard to predict” the effects of the COVID-19 outbreak on Malaysia’s growth going forward, the economic growth of the country will be affected by it, particularly in the first quarter of 2020. Nevertheless, due to the diversified nature of Malaysia’s economy, other factors may be able to cushion the impact of COVID-19 on selected sectors of the economy.

Malaysia backs off filing WTO suit against EU over palm oil phase out
(13 February 2020) The Malaysian government has seemingly backed off threats of filing a WTO suit against the European Union (EU) over the latter’s phasing out of palm oil-based biofuel. The EU in 2019 concluded that palm oil cultivation results in excessive deforestation and that palm oil-based biodiesel will eventually be phased out of renewable energy targets from 2024 onwards. Malaysia had previously indicated in July 2019 that it would launch a WTO case by November 2019. However, Malaysia’s Primary Industries Minister Teresa Kok indicated on 13 February that they wouldn’t file the suit “hastily,” and would instead seek to convince Europe to change its treatment of the crop in a review scheduled for 2021. The EU’s consumption of palm oil in food has been in steady decline, but its use of palm oil as a biofuel has increased. In 2019, the EU consumed more than 7 million tonnes, with some 65% for energy.

Vietnam Airlines losing US$10.8 million in revenue a week due to COVID-19
(13 February 2020) Vietnam Airlines revealed that it was losing up to US$10.8 million per week in revenue due to travel restrictions put in place to curb COVID-19. It is now reducing operations and trying to cut costs in order to mitigate the impact of the epidemic and attain a positive financial result for 2020, it said in an emailed statement. The airline has suspended all flights to and from mainland China since the end of January, directly affecting 70,000 visitors per month between the two countries. According to the Vietnamese government, the virus has so far cost Vietnam Airlines about US$430 million in lost revenues. Since the end of January, the number of passengers on its domestic routes has also fallen by 20%-30%. In 2019, the airline’s pre-tax profit increased 1.72% to US$145.4 million.

Indonesian government to support aviation and tourism industries impacted by coronavirus outbreak
(13 February 2020) The Indonesian government has stated they will provide support for the aviation and tourism industries impacted by the coronavirus outbreak. The Transport Ministry has projected a 30% drop in passenger volume for airlines because of the outbreak. Since the beginning of February, the government has halted all flights to mainland China. Among the measures to be implemented include cutting land charges and airport fees for carriers, as well as providing incentives for hotels and tourism businesses in areas popular among Chinese tourists such as Bali, Manado and the Riau Islands. Chinese holidaymakers make up the second-largest group of travellers to Indonesia, after Malaysians. Tourism is a significant industry for Indonesia and a large source of foreign exchange revenue needed to address its current account deficit.

Indonesian government to designate state firm to carry out upstream oil and gas activities
(13 February 2020) The Indonesian government plans to set up or designate a state firm to carry out upstream oil and gas activities in order to curb red tape and regulations in the energy sector. The plan was included in a new omnibus bill submitted to parliament and made public on 12 February, and will require private companies in the energy sector to conduct business with the state firm through a production sharing contract (PSC). The new plan will also drop the need for an upstream oil and gas regulator, which is currently SKK Migas. The responsibilities of SKK Migas under existing PSCs with private companies will be switched to the new state company once it is formed, according to the bill. It is unknown which state company might be designated.

Thailand hopes to generate more than US$2 billion from auction of 5G spectrum
(14 February 2020) Thailand projects to earn more than US$2 billion from the auction of spectrums of 5G mobile services scheduled to take place on 16 February. The National Broadcasting & Telecommunications Commission expects bidders to buy 28 of the 56 licenses available. The agency stated that its goal isn’t to maximise revenue but to spur investments into faster data connections. Three private sector firms and two state-owned firms will be taking part in the auction. The agency estimates an economic benefit of US$15.3 billion by 2022 from the 5G roll-out, up from an estimated US$5.7 billion in 2020.

BSP to promote interoperable QR code standard for ASEAN
(10 February 2020) The Philippines’ central bank, Bangko Sentral ng Pilipinas (BSP), is intensifying its efforts to achieve a cash-lite economy by pursuing an interoperable QR (quick response) code in Southeast Asia. According to BSP Governor Benjamin Diokno, the central bank is working with its peers in the Association of Southeast Asian (ASEAN), particularly Bank Indonesia and Bank of Thailand for an interoperable QR code to benefit the region’s 620 million people. Asked on when the interoperable QR code standard would be utilised in the region, he said “soon.” Diokno expects 50% of total transactions in the Philippines to be done through electronic means by the middle of 2023. In November 2019, the BSP and the Philippine Payments Management Inc. launched the National QR code standard (QR Ph) and the government electronic-payments (EGov Pay) facility. Prior to that, the BSP launched the National Retail Payment System (NRPS) in 2015 to increase the share of digital transactions to 20% by 2020.

Singapore to introduce new corporate structure designed to attract international funds
(14 February 2020) The Singaporean government introduced a new corporate structure in January, known as the Variable Capital Companies Act, designed to attract international firms looking to domicile funds. The law will make it easier for overseas and domestic firms to register funds in Singapore provided they have a local fund manager. The new rules will allow asset managers to use a single locally incorporated structure to hold a pool of assets and multiple sub-funds. The structure can house traditional and alternative strategies and will only require a single set of service providers, financial statements and board of directors for multiple sub-funds. The government hopes to create more jobs in the legal and accounting sectors.

Tech investment in Southeast Asia falls 36% in 2019
(8 February 2020) Total investment by tech investors in Southeast Asia dropped 36% to US$7.7 billion in 2019 from US$12.0 billion in 2018, according to a report by Cento Ventures. The number of “mega deals” in the region were fewer while the number of smaller deals worth less than US$50 million saw a significant increase. The value of the smaller deals totalled US$2.4 billion, up from US$1.5 billion in 2018. On the other hand, the total amount invested in the larger deals totalled US$5.3 billion in 2019, a marked decrease from US$10.5 billion in 2018. The report observed that Grab and Gojek, the region’s two established tech firms, had major funding rounds in 2019, which “appeared to be smaller than in the previous year.” Indonesia remains the largest beneficiary even though its share declined to 59% in 2019 from 76% in 2018. Funding for Vietnam-based tech startups exceeded Singapore for the first time, capturing 18% of total investment in the region whereas it had only captured 4% in 2018. The report also noted that although total investment in the region saw a decline, it remained an attractive region for tech investors in 2019.