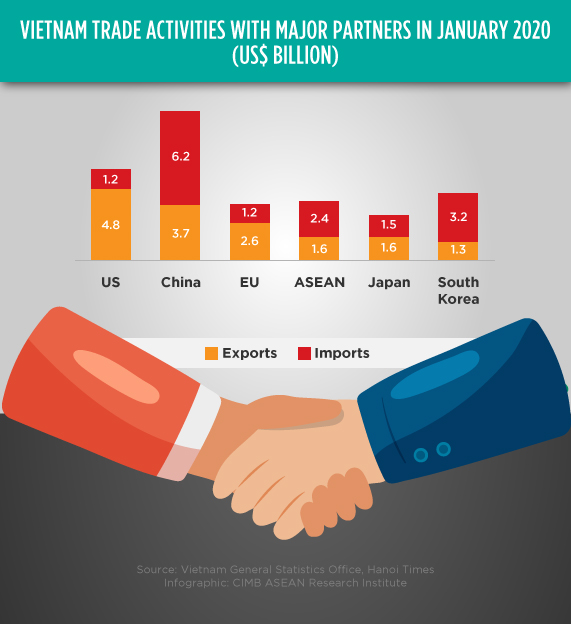 Vietnam reports trade deficit of U$100 million in January 2020
(2 February 2020) Vietnam reported an estimated trade deficit of US$100 million in January 2020, according to the General Statistics Office (GSO). The country’s exports totalled US$19 billion in January, a year-on-year drop of 15.8% while imports amounted to $19.1 billion, a reduction of 14.4%. The domestic sector reported an estimated trade deficit of US$2.4 billion while the foreign direct investment (FDI) sector recorded a trade surplus of $2.3 billion. The exports of electronics, computers and components increased 5.6% to US$2.6 billion while timber and wooden products increased 1.4% to US$1 billion. However, exports of textiles and garments dropped by 21.0% to US$2.6 billion, phones and their parts also valued at US$2.6 billion, dropped 22.4%; and footwear dropped 9.7% to US$1.6 billion. The US remains Vietnam’s largest export market even though its imports from Vietnam dropped 7.6% to US$4.8 billion. China and the EU were the second and third-largest export markets for Vietnam.

Central banks in Southeast Asia roll out measures to curb impact from coronavirus
(6 February 2020) Central banks from Indonesia, the Philippines, Singapore, and Thailand made announcements this week in relation to the coronavirus outbreak. The Bank of Thailand cut its benchmark interest rate on 5 February to a historic low of 1% after its monetary policy committee voted unanimously for the decision. The Monetary Authority of Singapore indicated on the same day that there may be further easing of the currency in the future. In the Philippines, the Bangko Sentral ng Pilipinas reduced its benchmark interest rate by 25 basis points to 3.75% on 6 February. This year’s round of easing in Southeast Asia began on 22 January when Malaysia announced an interest-rate cut, citing broad worries about the economic growth outlook. Meanwhile, Indonesia’s central bank is scheduled to have a meeting on 20 February. Bank Indonesia Governor Perry Warjiyo said on 5 February that the central bank would keep its policies accommodative in 2020 while adding that the benchmark interest rate is not the only tool officials will use.

Thai trade negotiators to review Thai-UK trading relationship
(4 February 2020) The Thai Department of Trade Negotiations at the Ministry of Commerce is preparing for future meetings with UK negotiators to allow for discussions on the possibility of a free trade agreement between Thailand and the UK, after Brexit was announced on 31 January. Key meetings are expected to take place on 7 and 13 February as officials review the trade details between Thailand and the UK in both directions, according to Department of Trade Negotiations Director-General, Auramon Supthaweethum. The UK is currently the kingdom’s 21st biggest trading partner while the EU is its third-largest. Trade between Thailand and the UK is worth US$6.2 billion and currently, Thailand has a trade surplus of US$1.4 billion. Thailand’s exports to the UK include automobiles, jewellery, poultry and electronics while its imports comprise electronics, pharmaceuticals, machinery and beverages.

Thai economy expected to grow by 3.0% in 2020, amidst risks from coronavirus outbreak
(5 February 2020) Thailand’s economy is forecasted to grow by 3.0% in 2020, but with heightened risks from the coronavirus, according to a report by Fitch. Factors that would help boost economic growth include supportive fiscal measures, better household consumption and FDI, and more accommodative monetary conditions. The tourism sector, which contributed some 14% to the country’s GDP in 2019, may be particularly impacted by the travel restrictions imposed by the Chinese government due to the coronavirus outbreak. The Tourism Authority of Thailand expects two million fewer Chinese tourists will visit the country in 2020. The economy’s recovery may struggle further as exports, investment, and consumption growth shrink.

Indonesian economic growth slowed down to 5.02% in 2019
(5 February 2020) Indonesia’s economy slowed down to 5.02% in 2019, down from 5.17% in 2018 due to weakness in exports and softer manufacturing output, according to government data. This figure missed forecasts of a 5.30% expansion. In December 2019, the World Bank warned that forest fires which raged across Indonesia last year would cost the economy an estimated US$5.20 billion. The country was also grappling with slumping prices for key commodities such as coal and palm oil, and the effects of the China-US trade war which has impacted economies around the globe. A research institute has warned that growth in the first quarter of 2020 would be weaker due to the impact of the coronavirus on exports and tourism.

Indonesia’s House of Representatives ratifies free trade agreement with Australia
(6 February 2020) Indonesia’s House of Representatives officially ratified the Indonesia-Australia Comprehensive Economic Partnership Agreement (IA-CEPA) on 6 February. Indonesia hopes the deal can help boost its export performance to positively affect the country’s negative trade balance. The IA-CEPA may see cuts on tariffs for commodity exports as well as investment privileges for those wanting to invest into Indonesia. The country recorded a trade deficit of US$3.2 billion in 2019, which was a significant improvement from the US$8.7 billion it recorded in 2018. Both Indonesia and Australia are set to launch a plan of action between 2020 to 2024 with regards to the implementation of the IA-CEPA.

Cambodia’s trade volume with South Korea exceeds US$1 billion
(5 February 2020) Trade volume between Cambodia and South Korea in 2019 reached more than US$1billion, according to Prime Minister Hun Sen who addressed more than 1,000 Cambodians in Seoul during the Universal Peace Federation (UPF) World Summit 2020 on 4 February. The two-way trade volume amounted to US$1.032 billion out of which, exports to South Korea amounted to US$335 million while imports from South Korea totalled US$696 million. Hun Sen noted the imbalance in trade was due to the high demand by Cambodians for South Korean goods, mostly automobiles and televisions. Cambodian exports to South Korea consist of mostly garments, electronics, shoes, beverages, bags, rubber, pharmaceuticals, cardboard and agricultural products.

Myanmar aims to export 2.5 million tonnes of rice this fiscal year
(4 February 2020) Myanmar has set a target of exporting 2.5 million tonnes of rice in the current 2019-2020 fiscal year which began in October 2019. According to the Myanmar Rice Federation (MRF), the country exported 986,345 tonnes of rice and broken rice, earning over US$282.9 million as of 10 January 2020. Between 1 October 2018 and 10 January 2020, Myanmar earned US$245 million from the export of 842,342 tonnes of rice via sea routes and earned US$37.8 million from 144,002 tonnes of rice that were exported through border gates. During the same period, 29% of Myanmar’s rice and broken rice were shipped to China, EU member states and African countries.

Twelve special economic zones in Laos attracted investments of US$5.7 billion as of 2018
(6 February 2020) Twelve special economic zones (SEZs) established across the country have attracted a total of US$5.7 billion since 2018, according to a recent official report. The zones’ developers have invested a total of US$4.3 billion, private companies US$1.4 billion, and the government underwriting the remaining US$52.0 million. A total of 806 companies have invested in the zones comprising 26.3% in the industrial sector, 25.3% in trade, and 48.4% in the services sector. Manufactured goods exported from the zones were valued at US$1.8 billion as of 2018. In addition, the zones have contributed more than US$39.3 million in the form of various taxes and fees to the state budget. The zones have reportedly created a total of 55,771 jobs, including 12,596 positions for Lao workers. The authorities are mulling the establishment of another special economic zone called “Smart & Eco-City” which would be based in both Luang Namtha and Oudomxay provinces.

59% of Indonesian economy still concentrated on Java Island in 2019
(5 February 2020) Around 59% of Indonesia’s economy is still concentrated on the island of Java, marking only a minor change from when it stood at 58.48% in 2018, according to Indonesian central statistics agency, BPS. The figure was obtained from Java’s contribution to the country’s GDP in 2019. After Java, the second largest contribution came from Sumatra (21.32%), Kalimantan (8.05%), Sulawesi (6.33%). In the lowest spots are Bali and Nusa Tenggara (3.06%), and Maluku and Papua (2.24%). Of the six islands, Sulawesi recorded the highest growth in 2019 with 6.65%, which matched the country’s overall economic growth in 2018.