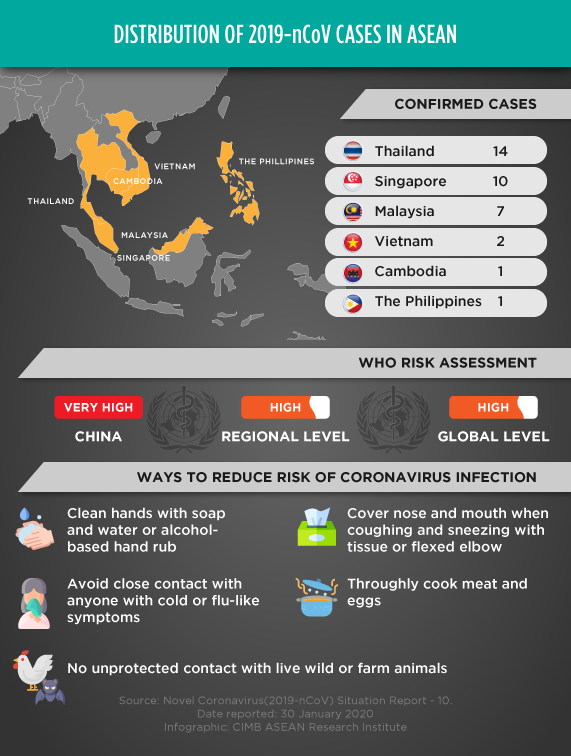 Bank Indonesia working to stabilise financial markets over coronavirus outbreak
(30 January 2020) Indonesia’s central bank is working towards stabilising financial markets in the aftermath of the coronavirus outbreak in China. Although the effects on the real economy have yet to be felt, the financial market has been impacted. The coronavirus outbreak has seen foreign investors of Indonesian government bonds turn into net sellers, selling off almost US$564 million worth of government bonds in three days through 29 January. The local currency has also come under pressure this week, trimming gains this year to 1.5%. The governor of Bank Indonesia Perry Warjiyo stated that monetary policy remains accommodative, though the bank has other instruments it can use besides interest rates, such as reserve requirements or injecting more liquidity.

Singaporean economy may be impacted by coronavirus outbreak but diversified enough to mitigate uncertainty
(30 January 2020) While the coronavirus outbreak will cause economic uncertainty to escalate, the Singaporean economy remains diversified enough to withstand it, said Singaporean Manpower Minister Josephine Teo. She admitted that “investment decisions are bound to be reexamined” as the virus causes global economic uncertainty to be heightened, but pointed out that the economic contributions of affected sectors such as tourism and hospitality are “relatively modest.” She added that the current circumstances are “significantly different” than during the 2003 Severe Acute Respiratory Syndrome (SARS) epidemic and said that while no one knows how long the health crisis will last, it is unlikely to persist. “It will not be business as usual because we know businesses have to take more precautions than before, but life must somehow go on, businesses must operate, workers must still be able to go to work,” she said.

Coronavirus outbreak expected to have a negative impact on Philippines economic growth
(29 January 2020) The coronavirus outbreak is projected to have a negative effect on the Philippines economy, according to a report released by a global bank. The drop in economic activity in China due to the virus is expected to affect Asian economies dependent on Chinese trade and tourism channels. The report stated that a 75% decline in the number of visitors and tourists from China in three months could cut 0.11 percentage points off the annual Philippines economic growth since Chinese nationals account for 20.9% of total foreign arrivals in the country. Meanwhile, a 20% drop in imports from China could slash Philippine economic growth by 0.08%. The report predicted however, that any effect on Philippine financial markets would be short-lived.

Bank of Thailand asks banks and non-bank financial institutions to soften credit rules
(30 January 2020) The Bank of Thailand has requested banks and non-bank financial institutions to temporarily lower credit rules to help debtors affected by the coronavirus outbreak in China. Among the requests made to institutions under their supervision included temporarily lowering the minimum amount due on credit cards to below 10% of the outstanding balance and loosening the ceiling for personal loan credit lines in the case of emergency. Other requests to these lenders included offering additional working capital and cutting or waiving interest rates, and easing debt repayment requirements. The relaxation, aimed at alleviating impacts from the deadly virus among affected borrowers, will run through the end of 2020, said Ronadol Numnonda, deputy governor for financial institutions stability. Two of Thailand’s largest banks, Kasikornbank (KBank) and Siam Commercial Bank (SCB), launched the relief measures on 29 January for their debtors affected by the virus outbreak.

Cambodian economy projected to grow 7.1% in 2020
(29 January 2020) Cambodia’s economy is projected to reach 7.1% in 2020, supported by robust construction activities, strong domestic credit growth and buoyant domestic demand, according to the ASEAN+3 Macroeconomic Research Office (AMRO). Inflation is expected to increase to 2.3% in 2020, a slight increase from 2.1% in 2020, AMRO said in a statement released on 29 January. It added that Cambodia’s major external vulnerabilities will stem from its high reliance on a few markets, particularly the European market. If the European Union (EU) suspends the Everything but Arms (EBA) trade scheme from Cambodia, the country’s exports will be affected. The country’s export to the EU in 2018 was valued at US$5.86 billion, out of which 95% entered the EU duty-free under the EBA trade scheme, EU data showed. The Cambodian government announced in March 2019 a number of measures that included lowering logistics and production costs and cutting red tape to support local manufacturers and exporters in case the EU withdrew the EBA preferences.

Vietnam expects US$100 million trade deficit in January
(30 January 2020) Vietnam’s trade balance is expected to slip into a deficit of US$100 million in January, from a surplus of US$259 million in December 2019, according to preliminary government data. Exports in January are expected to fall 14.3% from a year earlier to US$19 billion, while imports are forecasted to slump 11.3% to US$19.1 billion, the General Statistics Office said in a statement. The US remained the largest buyer of Vietnamese goods, purchasing US$4.8 billion in January, followed by China and the EU with US$3.7 billion and US$2.6 billion, respectively. Vietnamese exports to ASEAN and Japan were both at US$1.6 billion while exports to South Korea totalled US$1.3 billion. China was the largest source of Vietnam’s imports, with an estimated US$6.2 billion in January, followed by South Korea and ASEAN at US$3.2 billion and US$2.4 billion, respectively.

Thailand and Laos aim to double bilateral trade to around US$11 billion by 2021
(27 January 2020) Thailand and Laos aim to nearly double bilateral trade from US$5.9 billion in 2016 to around $11.0 billion by 2021, according to Auramon Supthaweethum, director-general of Thailand’s Trade Negotiations Department. In 2018, bilateral trade amounted to US$6.73 billion, increasing by 9.21% over 2017 with Thailand enjoying a trade surplus. Thai exports to Laos in 2018 amounted to US$4.12 billion, while Thai imports amounted to US$2.61 billion. Thailand and Laos intend to hold a meeting on 25-26 February to promote cooperation in trade and investment. The ministerial-level meeting will be held between the Ministry of Commerce of Thailand and the Ministry of Industry and Trade of Laos in Bangkok. Laos is currently Thailand’s 21st-largest trading partner and eighth-largest trading partner within ASEAN.

Malaysia eyes 20% increase in Bruneian tourist arrivals in 2020, despite the spread of Wuhan coronavirus
(30 January 2020) Malaysia has set a target of 1.5 million tourist arrivals from Brunei in 2020, exceeding its 1.2 million annual average, according to Tourism Malaysia’s Brunei office Director Hj Ibrahim Seddiqi Talib. Bruneians spent US$1.16 billion in Malaysia in 2019, a 3% increase compared to 2018, Tourism Malaysia statistics showed. In 2018, Malaysia registered US$1.12 billion in tourism receipts from Bruneians. Estimates show each Brunei resident spent an average of US$2,755 in Malaysia in 2019. Malaysia is a popular destination for Bruneians due to its proximity and favourable currency exchange. Tourism Malaysia data showed that Brunei continues to be the fifth-largest source of tourist arrivals in Malaysia from January to September 2019, with 929,789 arrivals. The top four countries were Singapore with 7.9 million arrivals; Indonesia with 2.8 million, followed by China and Thailand with 2.3 million and 1.4 million arrivals respectively. Hj Ibrahim said he does not expect tourist arrivals from ASEAN countries to be affected by the 2019 novel coronavirus outbreak as the source of the epidemic is China’s central city of Wuhan in Hubei province.

The Philippines goes live on ASEAN Single Window platform
(25 January 2020) The Philippines has officially joined the live operations of the ASEAN Single Window (ASW), according to the Department of Finance (DOF). The Bureau of Customs, along with its Export Coordination Division (ECD) and Export Divisions in three pilot ports, are now issuing the electronic Certificate of Origin (eCO). The ASW officially went online in the Philippines on 30 December 2019 using the country’s National Single Window (NSW), or the TRADENET.gov.ph platform. Finance Undersecretary Gil S. Beltran said going live on the ASW “lowers communication costs to as low as 10% of the original amount and encourages small enterprises to take advantage of preferential tariffs under ATIGA (ASEAN Trade in Goods Agreement).” The Philippines’ NSW, called TRADENET, will be connected and integrated to the NSWs of the other ASEAN members to expedite cargo clearance and promote regional integration.