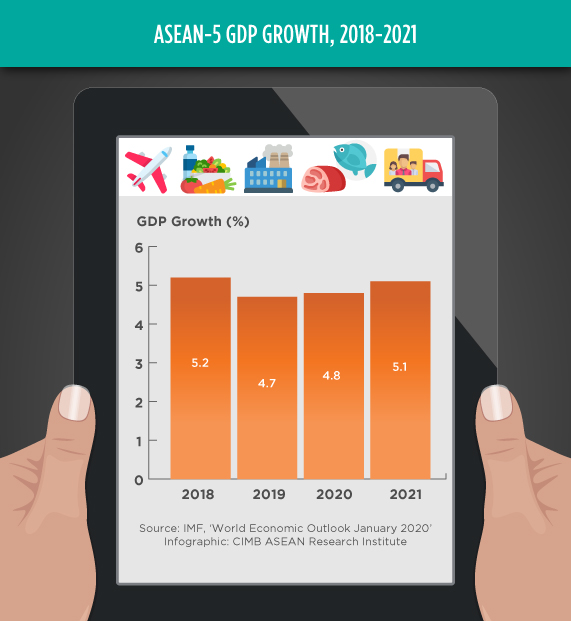 IMF trims growth forecast for ASEAN-5 countries due to sluggish exports
(21 January 2020) The International Monetary Fund (IMF) has trimmed its growth forecast for the ASEAN-5 countries by 0.1% for both 2020 and 2021, amid continued weak export figures. The ASEAN-5 countries, composing of Malaysia, Indonesia, Singapore, the Philippines, and Thailand, are now expected to grow by 4.8% and 5.1% respectively. The IMF has also revised its growth figures for the global economy for 2019, now believing it grew by 2.9% (another decrease of 0.1%). According to the organisation, global growth is projected to rise to 3.3% in 2020 and 3.4% in 2021.

Tourist arrivals to ASEAN in 2019 record 5% growth
(21 January 2020) Tourist arrivals to ASEAN recorded a 5% growth in 2019, exceeding the global average of 4%, according to the ASEAN Economic Community deputy secretary-general Dr. Aladdin D. Rillo. The region recorded a total of 133 million international arrivals in 2019, with intra-ASEAN arrivals making up 36.7% of the total arrivals. This was revealed during the conclusion of the recent ASEAN Tourism Forum 2020 in Brunei, where ministers convened to discuss efforts in making ASEAN a single tourism destination. Also discussed were efforts in making ASEAN tourism more sustainable and inclusive.

EU’s Committee on International Trade agree on EU-Vietnam free trade deal
(21 January 2020) The European Union (EU)’s Committee on International Trade voted in favour of the free trade and investment protection agreements between the EU and Vietnam on 21 January. The agreement will remove almost all tariffs between both parties in ten years, protect emblematic European products, and allow European access to the Vietnamese public procurement market. The agreement also contains legally-binding rules on environmental protections and labour rights. Vietnam is the EU’s second-largest trading partner in Southeast Asia.

Thailand’s exports fall by 2.7% y-o-y in 2019 due to external uncertainties
(23 January 2020) Thailand’s exports fell by 2.7% in 2019 year-on-year due to the global economic slowdown, weak agricultural prices, and decreasing exports of major industrial products. Imports also dropped by 4.7% in the same year, and Thailand’s trade surplus for the year was US$9.6 billion. Thai exports to the US and China in December 2019 recorded y-o-y growth of 15.6% and 7.3% respectively. The Commerce Ministry stated that exports are likely to improve in the future as the impact of external factors start to “neutralise.”

Non-financial institutions among those keen to apply for digital banking licences in Malaysia
(23 January 2020) Grab, Razer, AirAsia Group Bhd, and Axiata Group Bhd are among those looking to apply for digital banking licences in Malaysia. According to an international news wire, some of the firms were in discussions with consultancies on the possibilities of venturing into digital banking. In December 2019, Bank Negara Malaysia (BNM) announced that it would issue up to five licences to new online banks offering either conventional or Islamic banking under a proposed licencing framework that is scheduled to be finalised by June 2020. Based on BNM’s exposure draft revealed last December, digital banks have to maintain minimum capital funds unimpaired by losses of RM100 million (US$25 million) during the foundational phase and thereafter, the sum must be increased to RM300 million (US$74 million).

The Philippines’ economic growth seen to hit 6.1% in 2020
(22 January 2020) The Philippine economy is projected to grow 6.1% this year, according to an IHS Markit economist. The figure is the same as the one projected by the World Bank but lower than the 6.2% projected by the Asian Development Bank. According to IHS Markit Asia-Pacific chief economist Rajiv Biswas, “GDP growth momentum is forecast to strengthen to 6.1% in 2020, helped by stronger exports as improving global electronics orders and the US-China ‘phase one’ trade deal [would] support Philippines exports [amid the] continued ramping-up of the Duterte administration’s Build, Build, Build infrastructure program.”

Singapore announces new AI initiatives at WEF
(21 January 2020) Singapore announced a set of three initiatives aimed at improving consumer trust on the use and governance of artificial intelligence (AI) at the World Economic Forum (WEF) on 21 January. The initiatives are an Implementation and Self-Assessment Guide for Organisations (ISAGO); a compendium of use cases; and a second edition of the Model AI Governance Framework. The announcement followed a similar move at the WEF meeting in November 2019 where Singapore launched the first edition of Model AI and announced its National AI Strategy. The Model AI Governance Framework was updated to include additional considerations such as robustness and reproducibility, and is aimed at making it more relevant and usable.

Indonesia records lower trade deficit in December 2019
(20 January 2020) Indonesia registered a trade balance of US$0.03 billion in December 2019, shrinking significantly from the US$1.39 billion it registered in November 2019.”The improvement stemmed from a non-oil and gas trade surplus due to declining non-oil and gas imports across all commodity groups coupled with stronger non-oil and gas export performance,” Onny Widjanarko, Executive Director of the BI Communication Department, noted in a statement dated 20 January. Indonesia’s trade balance recorded a deficit of US$3.20 billion in 2019, considerably lower than the US$8.70 billion deficit recorded in 2018.

WeChat Pay now legally accepted in Indonesia
(16 January 2020) China-based e-wallet We-Chat Pay has been granted a permit by Bank Indonesia (BI) to operate in the country. According to BI deputy governor Sugeng, the central bank granted the permit on 1 January. The permit was granted after WeChat Pay formed a partnership with private bank CIMB Niaga. The bank will serve as an “acquirer” in charge of processing each transaction made through the e-wallet platform. WeChat Pay’s entry into the Indonesian growing cashless ecosystem coincided with the implementation of BI’s Quick Response Indonesia Standard (QRIS) code, which is a nationwide standard QR payment system. Customers using WeChat Pay will be able to use it when buying from merchants that support QRIS.