CARI Captures 436: Indian restrictions on refined palm oil may cause price war between Malaysia and Indonesia 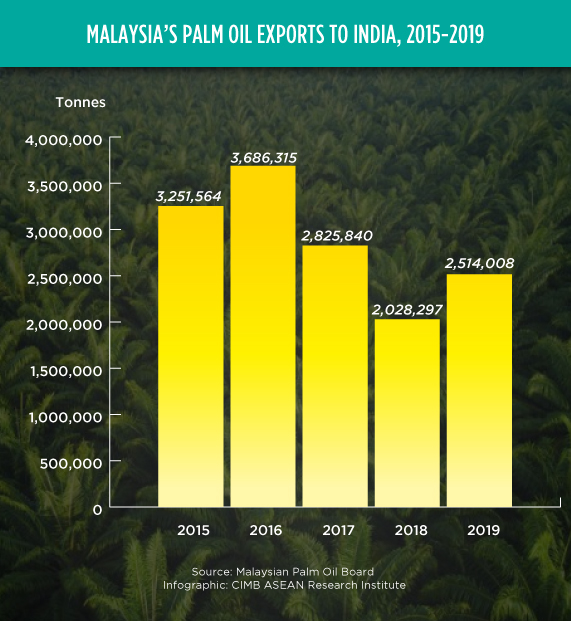 Indian restrictions on refined palm oil may result in price war between Malaysia and Indonesia
(9 January 2020) The Palm Oil Refiners Association of Malaysia claimed that India’s move on 8 January to amend the import of refined palm oil to ‘restricted’ will lead to a price war between Indonesia and Malaysia on crude palm oil sales to India. This is because Malaysia would now have to compete on crude palm oil sales to India, where Indonesia has traditionally been more cost-competitive. The recent restrictions could amount to quotas or more regulations. It is widely suspected that India’s move was due to diplomatic rifts with Malaysia over the fugitive preacher Zakir Naik and comments made by Malaysian Prime Minister Mahathir over Kashmir. A recent report by a prominent Indian news outlet suggested that India may consider imposing formal checks on Malaysia’s exports of palm oil and electronic goods.

Malaysia’s shadow economy takes up 20% of GDP, claims finance minister
(8 January 2020) Malaysia’s Finance Minister Lim Guan Eng stated that Malaysia’s so-called shadow economy comprises 20% of its GDP, referring to it as ‘uncommonly high for a developing country’ (which is normally around 12%). He described the shadow economy as consisting of corruption, smuggling, and unreported income, and that the 1MDB financial scandal alone was worth RM52 billion (US$13 billion). He also stated that the government’s tax revenue target for 2020 is RM155 billion (US$38 billion), as compared to RM145 billion (US$35 billion) in 2019.

Indonesia’s 2019 budget deficit rises to 2.2%
(7 January 2020) Indonesia’s 2019 state budget deficit reached 2.2% of its GDP, higher than the 1.8% government target due to a revenue shortfall of around US$15 billion. According to Finance Minister Sri Mulyani Indrawati, the government collected US$142 billion in state revenue in 2019, which was below the targeted amount of US$157 billion. The shortfall in tax revenue totalled US$18 billion, the lowest in at least five years. The lower tax revenue was the result of contractions in the manufacturing sector and mining industry.

The Philippines’ 2019 inflation reaches 2.5%, staying within government target
(7 January 2020) The inflation rate in the Philippines reached 2.5% in December 2019, bringing the entire year’s inflation rate to 2.5%. This was within the government’s 2019 target range of 2.0%-4.0%, according to the Philippines Socioeconomic Planning Secretary Ernesto Pernia. The inflation in December was primarily driven by the increase in the prices of both food and non-food items as a result of typhoons and rising oil prices. According to Pernia, even though the inflation rate was within the targeted range, the government must remain vigilant and proactive in managing the effects of potential price pressures caused by events such as typhoons, African swine fever and the heightened conflict in the Middle East.

Singapore exchange to remove quarterly reporting requirements starting in February
(9 January 2020) The regulatory arm of Singapore’s bourse plans to end requirements for listed companies with market capitalisation of above US$56 million to report their quarterly earnings. The rule change will take effect on February 7, and will only apply to companies not deemed as risky. Other changes to take effect include the tightening of other disclosure rules and the introduction of a new whistleblowing policy to protect investors. The Singapore Exchange Regulation stated that these changes were to encourage companies to focus ‘on the long term’. The quarterly reporting requirements will still apply to 100 companies when the rules change in February.

Thailand now at risk of being deemed currency manipulator by US Treasury
(8 January 2020) Thailand is now at risk of being placed on the US Treasury’s currency manipulators watchlist after its 12-month trade surplus with the US exceeded US$20 billion. The surplus had reached US$20.05 billion in the 12 months through November according to recent US data. This comes amidst the Thai government’s efforts in stemming the rise of the baht as one of Asia’s fastest appreciating currency, with a 6% gain against the dollar over the past year. Bank of Thailand Governor Veerathai Santiprabhob recently stated that Thailand is engaged in close dialogue with US officials concerning the matter.

Thailand Central Bank to further ease restrictions on capital outflows to ease gains in the baht
(8 January 2020) The Bank of Thailand Governor Veerathai Santiprabhob has stated plans to ease restrictions on capital outflows in the coming months to curb gains made by the baht. Thailand’s central bank has been struggling to rein in the baht after it gained almost 6% against the dollar over the past year, hurting tourism and exports. Among the plans the bank have considered include increasing the amount of proceeds exporters can hold overseas, the liberalisation of foreign-currency deposit accounts, and allowing insurance companies to invest more abroad. Previous measures taken by the central bank to curb the baht’s gains have included cutting interest rates to a record low last year.

ASEAN countries contributed over 46% of Myanmar’s total FDI during the period 1988-2019
(8 January 2020) According to Myanmar’s Ministry of Investment and Foreign Economic Relations, Myanmar has potential investments from ASEAN countries such as Singapore and Thailand for the fiscal year 2019/2020. It was further revealed that between 1988 to November 2019, all nine ASEAN countries invested a total amount of US$38 billion into Myanmar, which was equivalent to over 46% of total foreign investment into the country.

Consumer sector in ASEAN set for a soft start in 2020
(6 January 2020) The beginning of 2020 for ASEAN’s consumer sector is set for a soft start due to macro headwinds and soft consumer sentiments, according to a research report. Singapore, Malaysia and Thailand are expected to see an uptick in GDP but the increase will still be below the countries’ historical trends. On the other hand, the Philippines’ consumer market is projected to recover after it was hit during the period 2018-2019.