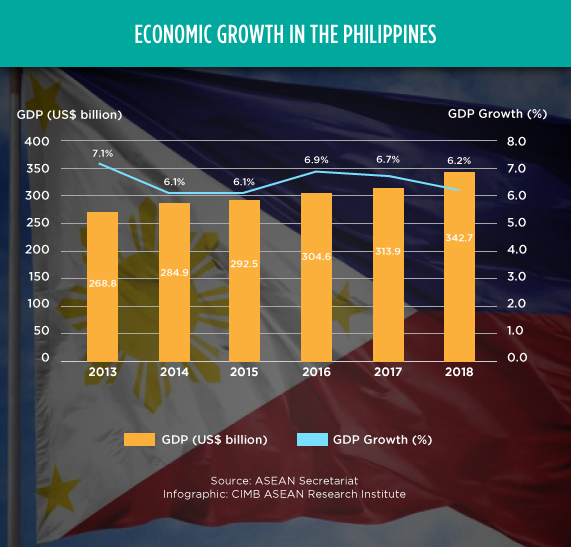 The Philippines sees 6.5% to 7.5% growth between 2020 and 2022
(18 December 2019) The Philippines’ economy is projected to grow by 6.5% to 7.5% in the next three years following the country’s “stable economic performance” this year, said socioeconomic planning secretary Ernesto Pernia. He added that the country’s GDP growth is expected to come in between 6.0% to 6.5% in 2019 fuelled by lower inflation, higher domestic consumption and robust public spending. Nevertheless, Pernia noted that the Philippines must be prepared to meet the looming challenges in 2020 such as slowing global trade and weaker global growth.

The Philippines to focus on trade deal negotiations in 2020
(16 December 2019) Negotiations for free trade agreements (FTA) with countries such as the United Arab Emirates (UAE), South Korea and the US will be high on the Philippines government’s agenda in 2020, said trade secretary Ramon M. Lopez. According to him, the government plan to seal a deal with the UAE before 2021 that aims to secure cheaper oil imports for the Philippines and increase industrial and agricultural product exports to the UAE. Trade between the countries rose 42.7% from US$1.5 billion in 2017 to US$2.1 billion in 2018.

Indonesia records trade deficit in November as imports increased m-o-m
(16 December 2019) Indonesia’s trade balance took a turn from October’s US$161.3 million surplus to a US$1.33 billion deficit in November — the country’s biggest deficit yet since the US$2.29 billion deficit it saw in April. Exports fell by 5.67% on the year to US$14.01 billion, while imports fell by 9.24% on the year to US$15.34 billion. According to Indonesian statistics agency head Suhariyanto, the decline was due to slowing international trade caused by trade tensions between the US and China which led to lower export demand.

Singapore’s exports continue downtrend with 5.9% fall in November
(17 December 2019) Singapore’s non-oil domestic exports continued to fall for a ninth consecutive month in November with a 5.9% year-on-year decline despite growing by 5.8% on a month-on-month basis. According to Enterprise Singapore, the fall was largely due to the 23.3% year-on-year plunge in exports of electronics, led by a decline in exports of integrated circuits (-36.5%), personal computers (-25.1%) and disk drives (-35.7%). Meanwhile, other non-oil exports rose by 1.3% in November, led by an increase in exports of non-monetary gold (249.3%), specialised machinery (15.5%), and non-electric engines and motors (40.1%).

Malaysia approves US$1.3 billion in manufacturing investments
(16 December 2019) Malaysia’s National Committee on Investment (NCI) announced that they have approved four manufacturing investments in four states worth US$1.3 billion on December 12, including a US$483.4 million glass manufacturing project in an industrial park in Sabah state’s Kota Kinabalu Industrial Park. According to the NCI, the project in Sabah is expected to create over 1,000 jobs, 80% of which will go to Malaysians. According to trade minister Darell Leiking, the country’s services, manufacturing and primary sectors received US$36.0 billion in investments from January to September 2019.

Liberalised permit for transshipment to be gazetted in 2020
(17 December 2019) The Malaysian government is expected to gazette new, liberalised regulations in the first quarter of 2020 aimed at easing the transshipment process for goods transiting through the country’s ports. According to transport minister Anthony Loke, the new regulations will see a significant reduction in the classes of goods that require an approved permit to transit through Malaysian ports from 74 classes to 20 classes. The move comes as part of plans to boost the competitiveness of Malaysian ports by reducing red tape and expediting turnaround times for shipping liners.

Bangkok Bank takes over PT Bank Permata for US$2.7 billion
(12 December 2019) Thailand’s Bangkok Bank announced that it plans to acquire an 89.1% stake in Indonesia’s Bank Permata for around US$2.7 billion. Bangkok Bank is presently Thailand’s second-largest bank by assets, while Bank Permata is owned by Standard Chartered and PT Astra International, with each holding a 44.6% stake. The move comes as Bangkok Bank looks to expand its presence in ASEAN markets to become a regional player, while Standard Chartered looks to reduce costs in countries such as Indonesia which it no longer considers a core market.

Indonesia takes EU to WTO over palm oil dispute
(16 December 2019) Indonesia submitted an official request to the World Trade Organization (WTO) on December 9 to initiate a lawsuit against the European Union for its decision to phase out the use of palm oil in biofuel blends in EU member states by 2030. According to trade minister Agus Suparmanto, Indonesia hopes that the lawsuit signals the government’s seriousness in combating discrimination against palm oil, and that they hope the EU will respond by withdrawing its RED II policy and the high-risk Indirect Land Use Change status that was imposed on palm oil.

The US slaps duties of up to 456% on Vietnamese steel products
(17 December 2019) The US Department of Commerce announced that it will impose tariffs of up to 456% on corrosion-resistant steel (CORE) products and cold-rolled steel (CRS) products imported from Vietnam. The ruling was made when the agency found that much of these exports were actually produced in South Korea and Taiwan, then shipped to Vietnam for minor processing before being exported to the US to circumvent the US’s anti-dumping and anti-subsidy duties. Shipments of CORE and CRS products from Vietnam to the US have surged by 4,353% and 922% respectively in recent years.