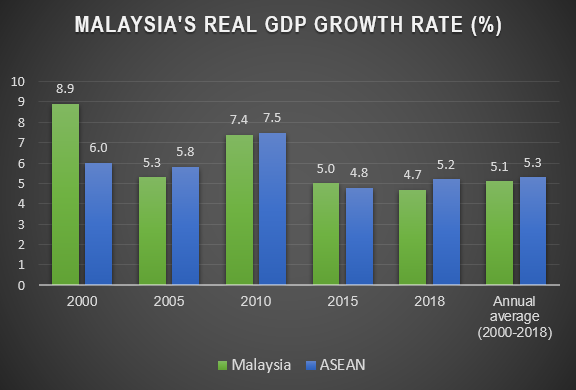 World Bank lowers Malaysia’s 2020 GDP forecast to 4.5% due to weaker exports and investment
(10 December 2019) The World Bank Group lowered Malaysia’s GDP growth forecast from 4.6% to 4.5% and investment growth forecast from 1.7% to 1.4% due to slower-than-expected investment activity in the third quarter of 2019, weaker export growth, and greater uncertainty surrounding business confidence and investment intentions. Furthermore, the country’s export growth forecast is expected to remain at 0.5% in 2020 against a backdrop of prolonged uncertainty in the global economy. Meanwhile, private consumption is expected to continue expanding at 6.5%, serving as the country’s primary growth driver.

The Philippines’ total trade in goods declines by 6.7% year-on-year in October
(10 December 2019) The Philippines’ trade in goods recorded a 6.7% year-on-year decline in October this year totalling only US$15.89 billion, down from the US$17.03 billion recorded in October 2018. Exports accounted for 39.8% or US$6.32 billion of the sum, while imports accounted for the remaining 60.2% or US$9.57 billion. Nevertheless, its trade in goods deficit came in at US$3.25 billion — 26.4% lower than last October’s US$4.42 billion deficit. Filipino socio-economic planning secretary Ernesto Pernia therefore urged businesses to improve their market strategies to capitalise on key products and economies of scale.

Myanmar sees US$1.3 billion in investments approved in October and November
(10 December 2019) The Myanmar Investment Commission approved investment inflows worth US$1.3 billion in 41 projects during the first two months of its 2019-2020 fiscal year beginning October 2019 — representing a three-times increase from the US$465 million it saw during the same period in 2018. Most of the US$1.2 billion went to real estate and infrastructure developments, such as the Adani Group’s US$290 million port project and Goldman Fortune International’s US$350 million mixed commercial development (both located in the Yangon region).

Brunei’s foreign tourist arrivals up 14.8% in Q1 2019
(10 December 2019) The number of foreign tourists visiting Brunei grew by 14.8% in the first quarter of the year to reach 81,174 arrivals, according to the Ministry of Primary Resources and Tourism (MPRT), putting the country on track to meet its 8% growth target of 300,273 air arrivals for 2019. According to tourism development head Salinah Hj Salleh, the growth is partly due to Royal Brunei Airlines’ diversification to 26 destinations this year, which includes a route to Beijing’s new Daxing International Airport.

Brunei-Oman joint venture increases capital for investments into agriculture and education
(11 December 2019) Brunei and Oman’s joint investment venture, the Oman Brunei Investment Company (OBIC), have inked an agreement to increase their capital investment in the OBIC from US$100 million to US$200 million. According to the Oman embassy in Brunei, both sides have also agreed to invest part of the additional capital in Brunei’s agriculture, food and services, and education sectors. The OBIC has thus far invested in nine projects in Oman since its establishment in 2009, and one project in Brunei — a 50% stake in aquaculture company Golden Corporation — in November this year.

Indonesia prepares lawsuit against EU for biodiesel import duties
(10 December 2019) Indonesia is working on filing a lawsuit against the European Union (EU) for its December 9 decision to impose tariffs of between 8.0% to 18.0% on biodiesel imports from Indonesia, said trade ministry secretary-general Oke Nurwan. However, he added that he could not reveal the government’s strategy and that they would have to “draft it first”. The EU’s most recent announcement, which follows its imposition of provisional tariffs on Indonesian biodiesel in August of this year, includes claims that Indonesia has been selling biodiesel at unfairly low prices.

Indonesia introduces new e-commerce regulations
(11 December 2019) The Indonesian government announced new e-commerce regulations this week that aims to protect local consumers and businesses as the country’s digital economy looks set to triple to US$133 billion by 2025. Under the new regulations, all online vendors are required to apply for a permit in order to sell their goods, while all online marketplaces are required to utilise local data centres and domain names. Industry players did not respond favourably to the new regulations, saying that the new procedures will increase costs and stifle industry growth (especially for small and medium enterprises).

US$137 billion worth of infrastructure investments in the pipeline
(10 December 2019) Indonesia has US$137 billion worth of investments in infrastructure projects in the works, 46% of which is expected to go to oil and petrochemical refinery projects, 34% to mineral processing facility developments, and the rest to transportation, tourism and other projects. According to investment minister Luhut Pandjaitan, he is also in talks with global investors to “bring in several billion US dollars” to establish the country’s sovereign wealth fund, in addition to luring big-name electronic manufacturers to build a lithium-ion car battery factory in the country.

Thai minimum wage could increase in 2020
(6 December 2019) Thailand’s national wage committee announced last week that it will submit a proposal to the cabinet this week to raise the national daily minimum wage from US$10.21-US$10.93 (308-330 baht) per day to US$10.37-US$11.13 (313-336 baht) per day beginning 1 January 2020. According to permanent secretary for labour Suthi Sukosol, the proposal will see workers in Bangkok, Chon Buri, Phuket, Prachin Buri, Samut Prakan and Samut Sakhon enjoy a US$0.20 (6 baht) increase, while workers in other provinces will see a US$0.17 (5 baht) increase.