Home / News & Views / CARI Captures 432: ASEAN and South Korea to aim for US$200 billion in trade next year

CARI Captures 432: ASEAN and South Korea to aim for US$200 billion in trade next year 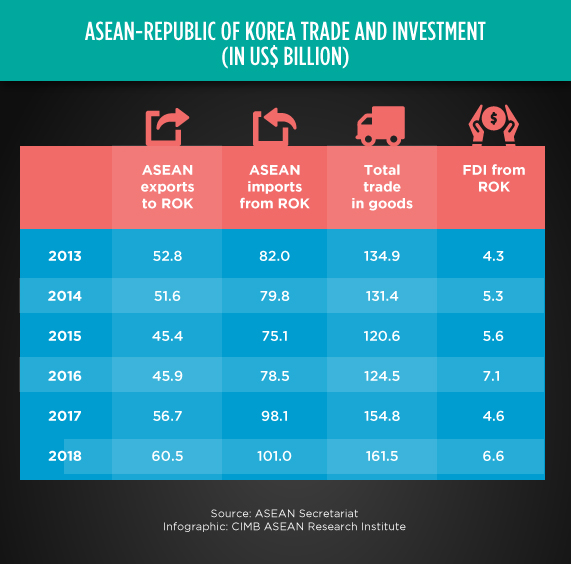 ASEAN and South Korea to aim for US$200 billion in trade next year
(26 November 2019) ASEAN countries and South Korea vowed to push for greater economic cooperation as “indispensable friends” in the face of growing protectionism around the world as they aim for US$200 billion in two-way trade in 2020 during the ASEAN-ROK Commemorative Summit held in Busan this week. According to South Korean government data, ASEAN is now the country’s second-largest trade partner as two-way trade grew by 4.4% and totalled US$160.5 billion in 2018. Similarly, South Korea is ASEAN’s fifth-largest trading partner and fifth-biggest source of foreign direct investment last year.

Indonesia and South Korea conclude talks for a free trade agreement
(25 November 2019) Indonesia and South Korea announced this week that they have completed negotiations on their bilateral Comprehensive Economic Partnership Agreement (CEPA) and will sign the pact in early 2020. Under the CEPA, Indonesia will enjoy tariff-free treatment on bunker C oil, sugar and beer, while South Korea will gain access to 93% of Indonesia’s market and zero tariffs on steel, car, car parts, textiles and machine parts. Meanwhile, Hyundai Motor Group announced that they will invest US$1.5 billion to build a finished car production plant in Indonesia’s Bekasi.

PH and South Korea aim to sign a bilateral FTA in 1H 2020
(27 November 2019) Filipino trade secretary Ramon M. Lopez and his South Korean counterpart Yoo Myung-hee signed an “early achievement package” this week to mark the progress that they have made so far in their FTA negotiations. Both sides now hope to conclude the deal by the first half of 2020 after missing their initial November deadline. So far, only the draft chapter on competition has been finalised. Trade between the Philippines and South Korea grew 8.83% from US$12.79 billion in 2017 to US$13.7 billion in 2018.

Cambodia and South Korea to work towards a free trade agreement
(26 November 2019) Cambodian commerce minister Pan Sorasak and South Korean trade minister Yoo Myung-hee inked an agreement to launch a feasibility study on the potential for a bilateral free trade agreement between the countries during the ASEAN-ROK summit in Busan this week. While a specific timeline was not disclosed, South Korean media speculate that the study could take a year. Trade between the countries grew by approximately 15% in 2018 from the year before, reaching US$756 million. Singapore and Vietnam are currently the only ASEAN countries with bilateral FTAs with South Korea.

Cambodian Prime Minister Hun Sen downplays loss of EU trade privileges
(21 November 2019) Cambodian Prime Minister Hun Sen responded to the European Union’s (EU) preliminary evaluation report on human and labour rights by saying that they would rather lose preferential access to the bloc’s Everything But Arms scheme than “exchange our sovereignty to plead for their gifts or their sympathies.” Besides, he said, Cambodia can still export to the EU even if it means tighter profit margins due to tariffs. He added that his administration has also been preparing for this eventuality since March this year.

EU takes Indonesia to the WTO over nickel ore export curbs
(22 November 2019) The EU lodged a complaint at the World Trade Organisation (WTO) last week against Indonesia’s measures to lower its exports of nickel and other raw materials as the country moves towards becoming a stainless steel producer. According to them, these measures have limited EU producers’ access to such raw materials, thus putting the region’s struggling steel sector at even greater risk. The bloc is also challenging what they call an “illegal subsidy” that spares Indonesian manufacturers from tariffs on certain imports meant for work on new factories as long as local appliances make up 30% of the content.

A Thai-EU FTA could help raise Thailand’s GDP by 1.63% per year
(22 November 2019) A Thailand-EU free trade agreement would help raise the country’s GDP by 1.63%, exports by 3.43%, imports by 3.42% and investment by 2.74% annually, according to Thai trade negotiations head Auramon Supthaweethum. The trade negotiations department has been conducting studies and public hearings ahead of the anticipated revival of the long-delayed Thai-EU FTA talks. Results from public hearings conducted these past months will soon be published online and submitted to the cabinet. The EU is Thailand’s fourth-largest investor and trade partner with trade totalling US$47.3 billion last year.

Palm oil-producing countries join forces to fight anti-palm oil campaign
(22 November 2019) The world’s major palm oil-producers Indonesia, Malaysia, Thailand, Brazil, Honduras and Nigeria agreed to cooperate in taking countermeasures against importing countries that impose discriminatory trade barriers to curb the use of palm oil. The agreement was made during a recent meeting of the Council of Palm Oil Producing Countries (CPOPC) in Kuala Lumpur, during which Malaysian Prime Minister Mahathir Mohamad also called on the palm oil-producing countries to adopt new technologies throughout the palm oil value chain in order to reduce labour input, improve productivity and ensure sustainable development.

Exports continue monthly decline with 4.5% drop
(22 November 2019) Thailand’s exports continued its third consecutive month in decline with a 4.5% year-on-year drop in October to US$20.75 billion, following a 1.4% drop in September and a 4% drop in August. Imports also fell by 7.6% in October to US$20.3 billion. Thai trade policy head Pimchanok Vonkorpon attributed the fall to the “fragile global economy” and “protectionist measures” taken by most of the country’s key trading partners, as well as lower oil prices which led to exports of finished oil to plunge by 35.4% in October.

ASEAN was the fifth largest economy in the world in 2018
(27 November 2019) The Southeast Asian economic bloc recorded around US$3 trillion in gross domestic product last year, making it the fifth-largest economy in the world, according to the 2019 ASEAN Integration Report launched by the ASEAN Secretariat this week. The bloc’s total trade grew 23.9% from US$2.3 trillion in 2015 to US$2.8 trillion in 2018, while FDI inflows grew 30.4% from US$118.7 billion in 2015 to US$154.7 billion last year. Furthermore, intra-ASEAN activity accounted for the largest share of the region’s trade and FDI at 23.0% and 15.9% respectively.