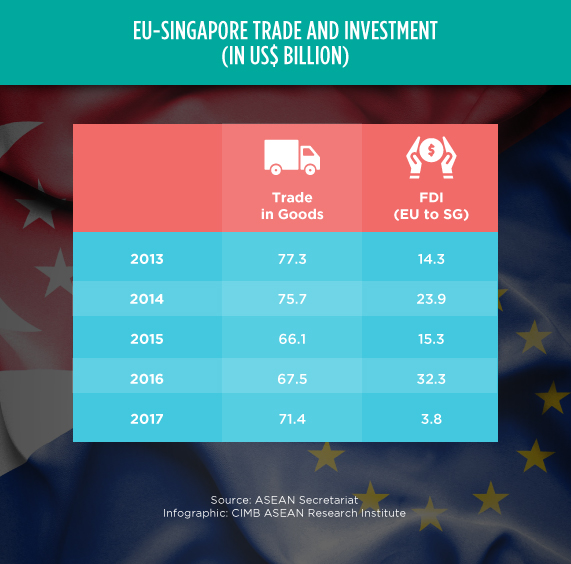 EU-Singapore Free Trade Agreement comes into force
(21 November 2019) The free trade agreement (FTA) between Singapore and the European Union (EU) came into force this week on November 21, promising greater market access and greatly-reduced tariff and non-tariff barriers for both sides. The FTA’s key benefits for Singapore include the complete removal of tariffs on exports of food products, electronics and pharmaceuticals, in addition to the phased removal of tariffs on other goods such as textiles, selected poultry and seafood products in the coming three to five years. It is hoped that this FTA will eventually lead to one between the EU and ASEAN.

Indonesian parliament commences debate on FTA with Australia
(19 November 2019) The Indonesia-Australia Comprehensive Economic Partnership Agreement was debated for the first time in the Indonesian parliament this week as the government looks to bring the pact into force, whether through parliamentary ratification or by Presidential decree. According to Australian media, several members of the Indonesian parliament voiced their concerns over a possible surge in imports of goods such as wheat and beef once the deal is ratified. In response, Indonesia’s newly-minted trade minister Agus Suparmanto said that he will work on furnishing them with detailed information about the countries’ trade balance.

Q3 growth slows in ASEAN’s second and third-largest economies
(18 November 2019) The Thai economy expanded at its slowest quarterly rate in the past 12 months in the third quarter of 2019 as it grew 0.1%, according to the National Economic and Social Development Council, prompting the government to lower its annual GDP growth forecast from 2.7%-3.2% to 2.6%. Similarly, growth in the Malaysian economy slowed to 4.4% in the third quarter from 4.9% in the previous quarter, according to the country’s central bank. Nevertheless, the central bank expects full-year growth target to remain within projections of 4.3%-4.8%.

Indonesia and Singapore’s exports down in October
(15 November 2019) Indonesia’s October exports fell by 6.13% on the year to US$14.93 billion despite beating forecasts of a 8.38% drop and recording a trade surplus of US$161.3 million during the month. Meanwhile, the country’s imports fell by 16.39% on the year to US$14.77 billion — its sharpest drop in five months. Similarly, Singapore’s exports continued on a downtrend for an eighth consecutive month in October as non-oil exports plunged 12.3%, down from September’s 8.1% decline. Meanwhile, the country’s total exports fell by 9.2%, total imports by 10.3% and total trade by 9.7%.

PH’s Ayala Corp acquires a 20% stake in Myanmar’s Yoma Group
(17 November 2019) The Philippines’ largest conglomerate Ayala Corp took a US$237.5 million 20% stake in Myanmar’s Yoma Group comprising Singapore-listed Yoma Strategic Holdings (YSH) and Myanmar-listed First Myanmar Investment. The acquisition by Ayala Corp, who has a US$10.4 billion market valuation, is regarded as the largest private investment by a Filipino firm in Myanmar to date. Similarly, Ayala’s energy subsidiary AC Energy also announced last month that it will partner with YSH to develop 200 MW of renewable energy in Myanmar which will provide power for around 70% of the country’s rural population.

Vietnam, PH mulling more tax incentives to boost automotive sector
(17 November 2019) Vietnam’s Ministry of Finance has been tasked by Prime Minister Nguyen Xuan Phuc to propose new incentives to encourage automotive manufacturers and assemblers to increase their production in the country. Such incentives could include lower tariffs on electric vehicles and components used in environmentally-friendly vehicles. Separately, the Philippines’ trade secretary Ramon Lopez said that they were studying ways to better support the local manufacturing sector, such as through the expansion of existing automotive tax incentive programmes to encourage manufacturers to produce in and not merely export to the country.

Cambodia to make its first oil extraction in 2020
(19 November 2019) Cambodia will likely make its first crude oil extraction next year, according to Prime Minister Hun Sen. Hun Sen’s statement was made in response to an announcement by KrisEnergy—the company who will conduct the drilling—stating that it will begin drilling the Aspara oil field in the first half of 2020. The company is currently constructing the mini-platform and five initial development wells needed to extract the oil and connect it to the production barge for processing. The field is ultimately expected to reach a daily peak rate of 7,500 barrels of oil.

Nationwide B30 biodiesel trial begins ahead of January enforcement
(21 November 2019) Indonesian state-owned energy company Pertamina began distributing 30% blended biodiesel or B30 biodiesel through eight Pertamina fuel depots around the country on November 19 after inking an agreement with 10 biofuel producers to supply said commodity. According to a senior energy ministry official, Pertamina will run the trial throughout December before the B30 mandatory policy comes into force in January next year. The B30 policy is part of the government’s plans to reduce its reliance on oil imports and traditional palm oil export markets such as the EU.

Malaysian palm oil to meet new EU food regulations by 2021
(19 November 2019) The Malaysian government is committed to ensuring that local palm oil producers meet the EU’s prescribed 3-MCPDE safety level by 2021, said primary industries minister Teresa Kok. According to Kok, the country is also working to ensure that at least 70% of local plantations obtain the Malaysian Sustainable Palm Oil certification by February 2020. Separately, the Malaysian Palm Oil Board said that it is exploring “all possibilities” to begin producing palm oil-based biojet fuel in the next five years as part of plans to boost demand for palm oil.

Transport ministers sign air accords to boost market connectivity
(18 November 2019) The 25th ASEAN Transport Ministers’ Meeting held in Hanoi last week concluded with the signing and adoption of several accords. Namely, one agreement to liberalise air transport ancillary services in ASEAN and another to expand air connectivity between ASEAN and China. The ministers also formally adopted several protocols during the meeting, including a protocol to mutually recognise each other’s flight simulation training devices, a protocol to operationalise international multimodal transport in the region, as well as the ASEAN Green Ship Strategy to curb emissions from ships.