CARI Captures 430: Vietnam, US ink US$2.7 billion in trade and investment deals 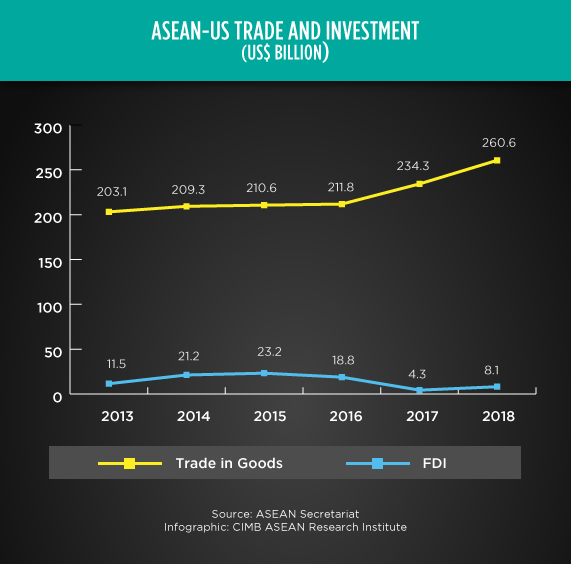 Vietnam, US ink US$2.7 billion in trade and investment deals
(9 November 2019) Vietnamese Prime Minister Nguyen Xuan Phuc witnessed the inking of US$2.7 billion in agreements between local and American companies during US Commerce Secretary Wilbur Ross’s visit to Vietnam. The first was a memorandum of understanding between the Vietnamese trade ministry with AES Corporation to develop a US$1.7 billion liquefied natural gas-fueled power plant in Binh Thuan province. The second agreement was a US$1 billion deal between Vietnam Airlines and aerospace manufacturer Pratt & Whitney to service the airline’s fleet of Airbus A321neo for 12 years.

Cambodia, US trade up 37% in the first nine months of 2019
(7 November 2019) Trade between Cambodia and the US saw a 37% year-on-year growth reaching US$4.3 billion during the first three quarters of the year, according to US government data. More specifically, Cambodian exports to the US grew by 38% to US$3.9 billion, while its imports from the US grew by 24% to US$400 million. According to the Garment Manufacturers Association in Cambodia, local travel goods producers have benefited from zero-tariff privileges under the US’ Generalised System of Preferences, though competition from Vietnam and Myanmar is also mounting.

US farmers look to Southeast Asia for export opportunities
(11 November 2019) The US agricultural sector is looking towards markets in Vietnam, Myanmar, and Thailand for new export opportunities. The US agriculture trade undersecretary Ted McKinney’s trade mission to Vietnam in October yielded over 655 meetings and an estimated US$5.1-5.2 million in sales from one meeting alone. According to McKinney, the trade mission to Vietnam is part of the US’s plans to shift its export focus to the three Southeast Asian countries, which together have around 221 million consumers and notably imported US$42 billion in agricultural goods in 2018 alone. However, only US$6.23 billion of such goods were from the US.

EU threatens to pull Cambodia’s trade benefits
(13 November 2019) The European Commission announced this week that it submitted its preliminary report on the suspension of Cambodia’s trade preferences under the EU’s Everything But Arms (EBA) scheme to the Cambodian government, and that Cambodia has one month to respond to their investigations before the bloc makes their final decision in February 2020. EU trade commissioner Cecilia Malmstrom said that they were “very concerned about the human rights situation” in Cambodia, while the Cambodian foreign ministry spokesman confirmed receipt of the report but said they have no comment for now.

EU-Singapore Free Trade Agreement to take effect on November 21
(8 November 2019) The free trade agreement between the European Union (EU) and Singapore is slated to come into force on November 21 after receiving the green light from the EU Council last week. Moving forward, both sides will work towards completing their “respective remaining administrative processes”. Once in force, the EU will enjoy tariff exemptions on all products entering Singapore, while the EU will do the same for 84% of Singapore exports. Tariffs on the remaining 16% of Singapore’s exports will be eliminated over a three- to five-year period.

Approved investments more than double in the first nine months
(8 November 2019) The Philippines’ Board of Investments announced last week that the value of the country’s approved investments more than doubled to US$15.05 billion in the first nine months of this year when compared to the same period last year. Furthermore, foreign investments grew seven times from US$661 million last year to US$4.72 billion, accounting for 31.4% of total investments. Meanwhile, domestic investments grew 54.7% from US$6.68 billion to US$10.33 billion. Singapore remained the Philippines’ top source of investments at US$3.35 billion, followed by South Korea, Thailand, Japan and the US.

Thailand readies digital initiatives to boost ease of doing business
(11 November 2019) Thailand’s Industry Ministry revealed this week that it has several plans in the pipeline to help local industry players to adopt and adapt to high technologies in line with the Thailand 4.0 initiative. This includes plans to establish a digital platform to reduce red tape and improve the ease of doing business in the country and provide stimulus packages to help local players meet Industry 4.0. Separately, it was announced that the Office of Industrial Affairs at the Thai embassy in China will be expanded to facilitate Chinese investment in the Eastern Economic Corridor.

Thailand plans to transition to gasohol E20 as primary petrol grade by 2020
(9 November 2019) Thailand’s Energy Ministry plans to make gasohol E20 — a type of biofuel made from sugar and cassava blended with unleaded petrol — the primary petrol grade by early 2020. According to energy minister Sontirat Sontijirawong, the plan is to integrate more agriculture commodities in biofuels to raise their prices. The planned nationwide adoption of E20 gasohol comes in addition to the government’s plans to make B10 — a blend of 10% palm oil-based biofuel and 90% diesel — the primary fuel for diesel by 2020.

DST and Baiduri Bank partner to elevate Brunei’s digital payments ecosystem
(12 November 2019) Brunei’s largest telecommunications company DST and local bank Baiduri inked a memorandum of understanding to form a partnership that they say will allow them to develop Brunei’s “largest digital payment ecosystem”. According to the companies, they will start by launching an e-wallet that uses Near Field Communications technology in the second quarter of next year. Once implemented, all DST subscribers will be able to use the e-wallet at all Baiduri Bank merchant outlets as well as through a regional payment platform that will enable them to use the e-wallet overseas.