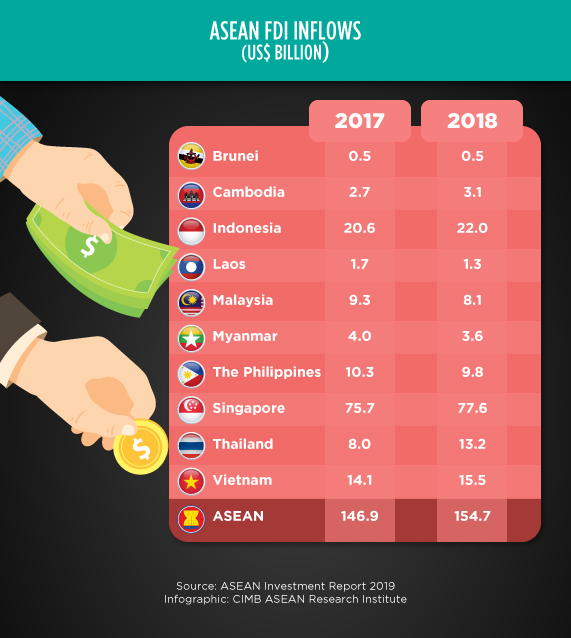 ASEAN sees record-high US$155 billion in FDI inflows in 2018
(4 November 2019) Foreign direct investment (FDI) inflows to the Southeast Asian economic bloc grew by 11.5% last year totalling US$155 billion, even as global FDI outflows fell by over 1%. Furthermore, four ASEAN countries — Cambodia, Indonesia, Singapore and Vietnam — also saw record high FDI inflows. According to UNCTAD investment research head Richard Bolwijn, the uptrend in ASEAN was likely due to the “investment divergence” from China. These figures were found in the ASEAN Investment Report 2019 released in conjunction with the 35th ASEAN Summit held in Bangkok, Thailand on November 2-4.

15 countries complete RCEP negotiations, signing expected in 2020
(4 November 2019) All participating countries sans India involved in negotiations for the Regional Comprehensive Economic Partnership (RCEP) have concluded “text-based” negotiations for all 20 chapters of the proposed pact, according to the joint statement published after the 3rd RCEP Summit held on the last day of the ASEAN Summit. Moving forward, the text will undergo legal scrubbing before a formal signing in 2020 in Vietnam. The statement added that the countries remain committed to working together to resolve the “significant outstanding issues” that India has with the pact.

India keen to boost cooperation with ASEAN in areas of mutual interest
(4 November 2019) India is ready to elevate its partnership with ASEAN as part of its Act East Policy, especially through greater connectivity via land, sea, air and digital channels, Indian Prime Minister Narendra Modi said during the recent ASEAN-India Summit held on November 3. The premier also welcomed the bloc’s decision to review and improve the existing ASEAN-India Trade in Goods Agreement to further bolster trade between the parties, while his Singaporean counterpart Lee Hsien Loong urged both sides to conclude the ASEAN-India air and maritime transport agreements soon to boost economic cooperation.

EAEU, UK, and New Zealand look to deepen trade ties with ASEAN
(3 November 2019) Representatives from the Eurasian Economic Union (EAEU), the UK and New Zealand were present at the recent ASEAN Summit held in Bangkok. The EAEU, which was represented by Russian Prime Minister Dmitry Medvedev, said that they are in talks to form more free trade agreements with ASEAN countries as they have with Vietnam and Singapore while New Zealand Prime Minister Jacinda Ardern said that the first round of talks to upgrade the ASEAN-Australia-New Zealand FTA will be held in 2020 and that the country hopes for more cooperation opportunities with ASEAN.

Vietnam assumes ASEAN Chairmanship for 2020
(5 November 2019) Vietnam officially assumed the ASEAN Chairmanship for 2020 on November 4 under the theme “Cohesive and Responsive,” its second time since it first became ASEAN chair in 2010. According to local media, the country has also put forth five priorities for its chairmanship: (i) enhance the bloc’s role in maintaining regional peace, (ii) boost regional connectivity, (iii) improve the region’s ability to adapt to and capitalise on the Fourth Industrial Revolution, (iv) promote the ASEAN Community and partnerships for sustainable development, and (v) improve ASEAN institutions to better meet the bloc’s needs.

Thailand, Malaysia to push for seamless border trade
(3 November 2019) Thailand and Malaysia’s heads of state Prayut Chan-o-cha and Mahathir Mohamad’s meeting on the sidelines of the 35th ASEAN Summit yielded an agreement to improve infrastructure along the countries’ shared border and work towards the signing of a memorandum of understanding (MoU) to boost cross-border freight transport. Such efforts, they said, will also help improve connectivity between Thailand’s Bangkok; Malaysia’s northern Penang and southern Johor Bahru; and Singapore. Prayut, for his part, also shared his hopes that Malaysia will allow more imports from southern Thai provinces.

Malaysia’s exports drop 6.8% in September
(4 November 2019) Malaysian exports saw its biggest drop in three years with a 6.8% year-on-year decline in September to US$18.74 billion. According to government data, the fall was due to lower demand from its major trade partners except the US which rose 6.6% — exports to China fell 3%, while exports to Hong Kong, Japan and other ASEAN countries also fell. Sector-wise, Malaysia’s exports of manufactured goods saw a 5.8% year-on-year dip, while exports of mining goods exports fell 15.2%, and exports of palm oil fell 9.3% on the year.

Indonesia reviewing EU trade deal draft as palm oil spat drags on
(1 November 2019) The Indonesian government is currently reviewing its draft trade agreement with the European Union (EU) to ensure that palm oil is positioned “fairly” in the text, said vice foreign minister Mahendra Siregar. Mahendra’s comments come as Indonesia prepares to file a complaint against the EU with the World Trade Organization (WTO) over the bloc’s “structured and systematic” campaign to bar the use of palm oil in renewable transport fuel in the EU by using environmental concerns “as a guise for protectionism.”

Indonesia’s Q3 GDP growth slows to 5.02%
(5 November 2019) Indonesia’s economic growth fell to 5.02% in the third quarter of 2019 — its slowest in over two years. According to government statistics, the fall was due to lower government spending, investments, and commodity prices — on top of the global economic slowdown caused by the prolonged US-China trade war. Indonesia previously recorded a 5.05% growth in the second quarter of this year and 5.17% growth in the third quarter of last year. Year to date, the country’s GDP has grown by 5.04% in 2019.

Gojek seeks to enter Malaysia and the Philippines by 2020
(4 November 2019) Indonesian ride-hailing unicorn Gojek will launch its services in Malaysia and the Philippines next year, according to the company’s new co-CEOs Andre Soelistyo and Kevin Aluwi. Furthermore, the company plans to alter its ratio of domestic and international customers to 50:50 in the next five years from the existing 80:20 ratio. The co-CEOs, who were speaking at the company’s ninth anniversary celebrations, also shared their four priorities moving forward: improving customer satisfaction, balancing growth with sustainability, expanding to new foreign markets, and turning Gojek into a world-class workplace.