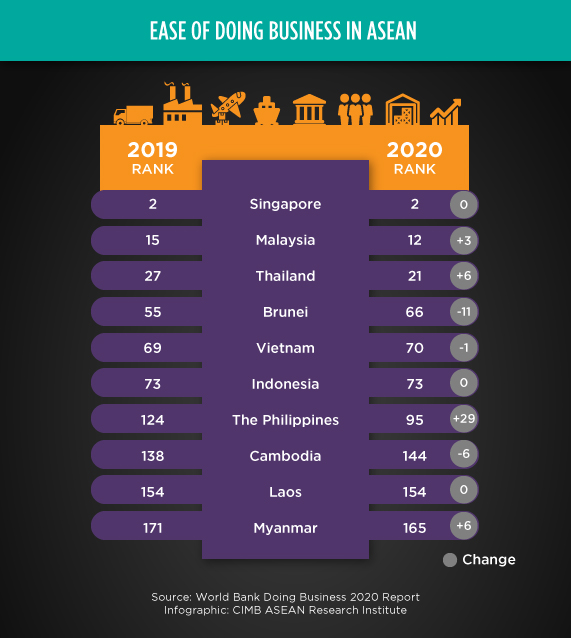 Singapore, Malaysia continue to lead the region in ease of doing business
(24 October 2019) Singapore maintained its place as the second best place to do business in the world in this year’s ease of doing business rankings which was included in the World Bank’s Doing Business 2020 report. In ASEAN, the republic was followed by Malaysia which moved up three places from 15 to 12 this year. Notable improvements were made by the Philippines which leapt 29 places, having implemented three major reforms which included removing the minimum capital requirement for domestic enterprises, and Myanmar which moved up six places with five reforms which included a reduction in incorporation fees and the creation of a company registration portal. Globally, New Zealand topped the list, coming in ahead of Singapore, Hong Kong, Denmark and Korea, with the US, Georgia, UK, Norway, and Sweden rounding up the top 10 spots.

US-China tensions spur progress on RCEP trade pact
(29 October 2019) The pace of negotiations for the proposed Regional Comprehensive Economic Partnership (RCEP) trade pact appear to have accelerated this year as the 16 participating countries look to the pact to cushion the impact of the prolonged US-China trade war. The negotiations on 6 of 20 chapters have yet to conclude, but “major progress, if not final agreement” is expected when leaders convene for the 35th ASEAN Summit in Bangkok from October 31 to November 4. When concluded, the RCEP could become the world’s largest free trade zone accounting for a third of global GDP.

ASEAN rail connectivity to be discussed at upcoming summit
(30 October 2019) Leaders attending the upcoming ASEAN Summit will discuss, among other topics, proposals to improve the region’s connectivity via rail infrastructure based on international standards. According to State Railway of Thailand (SRT) acting chief Worawut Mala, this will include discussions on how to promote the respective countries’ national rail system and ways to further develop such systems. Furthermore, a portal on ASEAN railways will also be launched at the summit to provide public information on the rail systems in Indonesia, Thailand, Malaysia, Cambodia, Laos, Myanmar and Vietnam.

Thailand, US trade barbs on Thailand’s ban on farm chemicals
(25 October 2019) US agriculture undersecretary Ted Mckinney sent a letter to the Thai government last week protesting the administration’s decision to ban the use of three “hazardous” farming chemicals effective December 1, stating that glyphosate “poses no meaningful risk to human health” and adding that the ban on glyphosate would “severely impact” US agricultural exports, such as soybeans and wheat, to Thailand. In response, Thai health minister argued that while the US was only concerned about trade, the Thai government was concerned about the health of its citizens. US exports of soybean and wheat totalled US$773 million in 2018.

Thailand to appeal against US trade benefits suspension
(28 October 2019) US President Donald Trump announced on October 25 that the US will suspend part of Thailand’s access to its Generalised System of Preferences (GSP) programme effective 25 April 2020, on the basis of “worker rights” issues. About one-third or US$1.3 billion of the US$4.5 billion in Thai exports that currently benefit from the GSP will be affected. In response, Thailand says that they intend to discuss the matter with US officials at the upcoming ASEAN Summit in the hopes of resolving the issue before the suspension kicks in.

Government responds to US’ GSP suspension with seven measures
(29 October 2019) Thailand’s international trade promotion department announced this week that it will put in place seven measures to cushion the impact of the US’ planned suspension of Thailand’s Generalised System of Preferences (GSP) trade privileges. The seven measures include increasing exports to the US in the next six months as US importers stockpile goods before the suspension is enforced, growing the market for the seven Thai products which recently had its US trade benefits restored, and seeking new export markets for the 573 types of goods affected by the suspension.

Vietnam extends anti-dumping duties on steel products from Indonesia, Malaysia
(28 October 2019) Vietnam’s Ministry of Industry and Trade announced last week that it has extended anti-dumping duties on imports of cold-rolled stainless steel products from Indonesia, Malaysia, Taiwan and China for another five years. The extension, which took effect on October 26, was made to continue protecting local steelmakers’ market share which the ministry says has been recovering thanks to anti-dumping duties that were imposed five years ago. Nevertheless, local players held only 42.8% of the market share during the 2018-2019 period, despite production growing by 1% and turnover growing by 4.69%.

Gojek, Tokopedia prepare for dual stock market listings
(26 October 2019) Indonesian unicorns Gojek and Tokopedia announced last week that they are planning to take their companies public with dual stock market listings in the coming few years. Gojek’s announcement was made following the appointment of the company’s new co-CEOs, Andre Sulistyo and Kevin Aluwi, while Tokopedia’s came in the form of a report which revealed that the company is currently in talks for pre-IPO funding. The Indonesian government is known to encourage local unicorns to have more than one listing in order to absorb capital from both domestic and foreign investors.