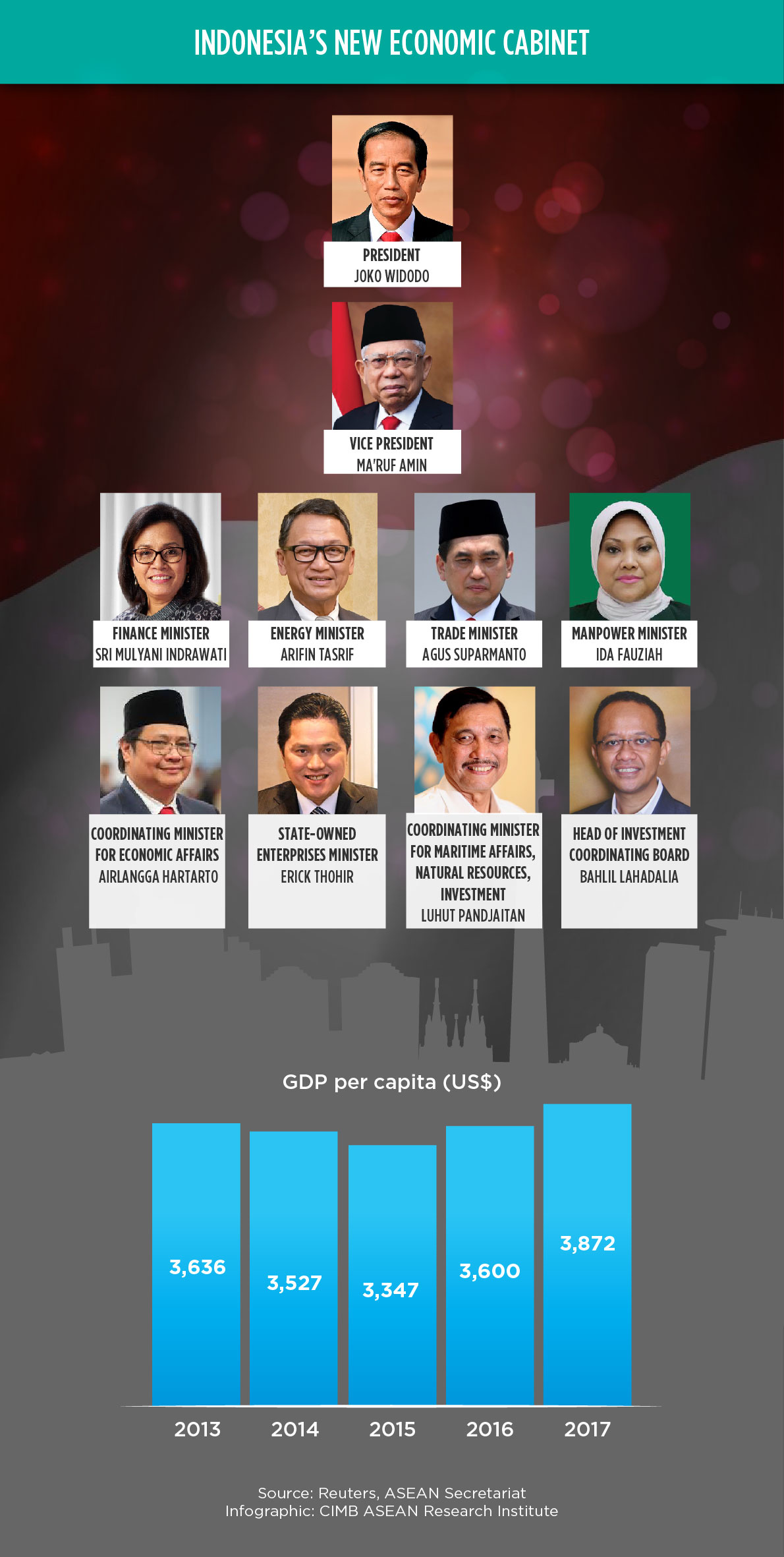 The new Indonesian cabinet’s key economic appointments
(23 October 2019) President Joko Widodo’s second term at the helm of Southeast Asia’s largest economy will be driven by what he calls his “Onward Indonesia Cabinet” which, aside from incumbent finance minister Sri Mulyani Indrawati and coordinating minister for maritime affairs, natural resources and investment Luhut Pandjaitan, includes a slew of new appointments on the economic front. This includes a new coordinating minister for economic affairs in Airlangga Hartarto, a new trade minister in Agus Suparmanto, a new state-owned enterprises minister in Erick Thohir, and a new investment coordinating board head in Bahlil Lahadalia.

President Joko Widodo’s envisions developed Indonesia by 2045
(21 October 2019) President Joko Widodo’s started his second term by touting his “dream” to make Indonesia a developed country by 2045. According to a local media outlet, a high-income Indonesia would also make it one of the world’s five largest economies, and President Joko plans to achieve this by (i) avoiding the middle-income trap, (ii) raising GDP per capita by over five times to 320 million rupiah per year, or US$22,700 per year, (iii) grow GDP by seven times to US$7 trillion, and (iv) lower the poverty rate from the current 9.41% to nearly 0%.

Brunei’s economy rebounds 6.7% in second quarter of 2019
(22 October 2019) Brunei’s GDP grew by 6.7% at US$4.74 billion in the second quarter of the year, an improvement from the 0.5% dip it saw in the previous quarter. The rebound — which also represents its biggest improvement in quarterly growth for the first time since 2016 — was largely due to growth in the oil and gas industry, which expanded by 8.7% to US$2.91 billion. The country’s non-oil and gas sector also grew by 4.1%, fuelled largely by the 21.8% growth in the financial sector.

Thai exports post a 1.39% dip
(22 October 2019) Thailand’s exports continued on a downtrend trend in September with a 1.39% year-on-year dip but recovered from August’s 4.0% plunge, fuelled largely by higher exports of industrial goods such as electrical goods and parts, agricultural products, as well as automobiles and parts. Meanwhile, imports in September also declined by 4.24% on the year. Thailand’s exports in the first nine months of 2019 fell by 2.11% on the year, while its imports also fell by 3.68% on the year during the same period.

Thailand, Myanmar to use baht, kyat for cross-border transactions
(23 October 2019) The central bank governors of Thailand Veerathai Santiprabhob and his Myanmar counterpart U Kyaw Kyaw Maung inked two memoranda of understanding (MoU) on the sidelines of the IMF-World Bank meeting held in the US on October 18. The first MoU seeks to promote the use of the native currencies of each country when conducting border trade, as opposed to using other currencies such as the US dollar for payments through banks. The second MoU aims to promote bilateral cooperation in the areas of financial innovation and payment services.

Construction sector sees US$6.5 billion in investment inflows for the first nine months of 2019
(18 October 2019) Investment in Cambodia’s construction sector saw a 34.7% year-on-year spike from January to September this year totalling US$6.5 billion, according to a recent government report. The report also found that 3,433 construction projects which will span over 13 million square metres were approved during the period, up from the 2,541 projects worth US$4.8 billion that were approved last year. With this, over 46,991 construction projects worth over US$48 billion have been approved since the year 2000, with the most investments coming from China.

Thailand to colour palm oil biodiesel to combat smuggling
(22 October 2019) Thailand will combat the issue of palm oil being smuggled from neighbouring countries by colourising its home-grown purified biodiesel before it is blended with diesel oil. According to energy minister Sontirat Sontijirawong, the colourisation will be rolled out in line with the government’s plan to adopt B10 as the main diesel option by early 2020. Once implemented, B10 biodiesel is expected to absorb 2.2 million tonnes of crude palm oil surplus annually or two-thirds of the current supply. The remaining one-third is typically absorbed by the food sector.

India traders urged not to import Malaysian palm oil
(21 October 2019) A Mumbai-based Indian oilseed extractors trade association called on its members to cease importing palm oil from Malaysia as “a mark of solidarity” with the Indian government who “has not taken kindly” to Malaysian Prime Minister Mahathir Mohamad’s remarks on the Kashmir conflict that were made at the UN General Assembly. India is presently the world’s top vegetable oil buyer, importing primarily from Indonesia and Malaysia. The country’s palm oil imports from Malaysia were worth US$1.65 billion in 2018.

Singapore, US sign agreement to boost bilateral cooperation
(19 October 2019) Singapore and the US inked an agreement last week on the sidelines of the G20 Finance Ministers’ and Central Bank Governors’ Meeting to bolster cooperation in infrastructure financing. According to a Singapore finance ministry statement, the agreement will help enhance knowledge sharing and promote infrastructure investments in Southeast Asia. According to Singapore second finance minister Indranee Rajah, 60% of infrastructure finance transactions within ASEAN are currently arranged by banks based in Singapore.