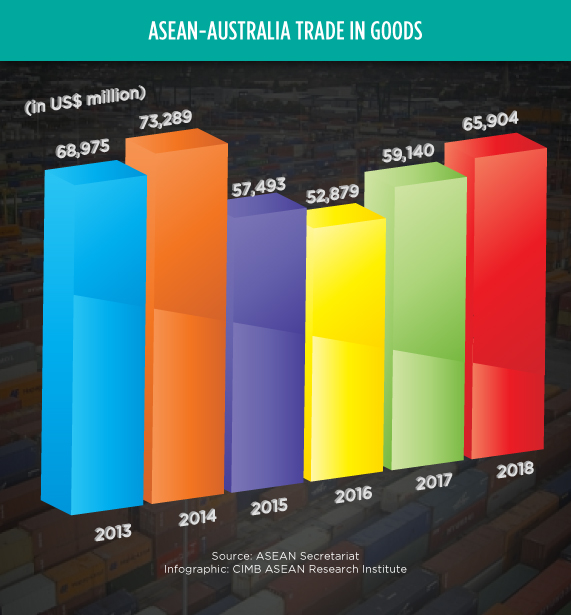 Singapore, Australia begin negotiations on digital economy pact
(12 October 2019) Singapore and Australia announced last week that they have commenced talks for a bilateral Digital Economy Agreement that will be finalised by early 2020. According to Singaporean trade minister Chan Chun Sing and his Australian counterpart Simon Birmingham, the pact will complement existing bilateral free trade agreements in boosting digital trade between the countries while facilitating greater data protection and cross-border data flows. The pact is intended to compliment the countries’ efforts as co-convener of the World Trade Organisation Joint Statement Initiative on E-Commerce to develop international digital trade rules.

Thai government to expedite revival of talks for Thai-EU FTA
(16 October 2019) Thailand’s trade negotiations chief Auramon Supthaweethum said that the government is expediting internal studies in hopes of reviving the long-postponed trade negotiations between Thailand and the EU for a free trade agreement (FTA). According to her, these studies may be submitted for cabinet approval as early as next month after her department concludes a series of public hearings held in Chiang Mai, Songkhla, Khon Kaen and Bangkok in October and November. EU is presently Thailand’s fourth largest trade partner and fourth largest source of foreign investment. FTA negotiations were put on hold since the 2014 coup.

Malaysia offers to increase agriculture imports from India to ease tensions
(15 October 2019) The Malaysian Ministry of Primary Industries published a statement this week stating their concerns regarding recent reports suggesting unfavourable relations between Malaysia and India, and saying that Malaysia is “open to further trade negotiations” to address the countries’ trade imbalance. According to the statement, this includes the possibility of Malaysia importing more raw sugar and buffalo meat from India next year. India is presently Malaysia’s third-largest export destination for palm oil and related products, with total exports worth US$10.8 billion and imports worth US$6.4 billion in the previous fiscal year that ended March 31, 2019.

RCEP countries racing to iron out issues and seal pact
(13 October 2019) The latest round of ministerial negotiations for the Regional Comprehensive Economic Partnership (RCEP) held recently were “challenging,” according to New Zealand trade minister Damien O’Connor. Nevertheless, meeting chair and Thai deputy prime minister Jurin Laksanawisit confirmed that progress was made and that negotiations on 14 of the 20 chapters in the draft agreement has been completed. The delay is partly due to pushback from several influential quarters in India who are concerned over the impact the RCEP would have on Indian agriculture and manufacturing.

ASEAN nations to exchange trade documents via single window system by year-end
(14 October 2019) Eight ASEAN countries — Indonesia, Thailand, Malaysia, the Philippines, Vietnam, Singapore, Brunei and Cambodia — are slated to adopt the ASEAN Single Window (ASW) platform by the end of 2019, thus allowing them to exchange trade and customs-related documents through an electronic platform. According to Filipino finance undersecretary Gil S. Beltran, countries will also be able to begin exchanging other documents such as self-certification of product origin and shipping documents beginning next year.

Indonesia swings back to a US$160.5 million trade deficit
(15 October 2019) Indonesia recorded a US$160.5 million trade deficit in September, down from US$112.4 million trade surplus in August. According to government data, this was due to the slower-than-expected decline in imports which fell 2.41% on the year to US$14.26 billion. Furthermore, imports of capital and consumer products grew during the month, cushioning the overall drop in imports. Meanwhile, exports also fell 5.74% on the year to US$14.1 billion due to a drop in exports of the country’s two key commodities: coal and palm oil.

Singapore economy records 0.6% growth in 3Q19
(13 October 2019) The Singaporean economy avoided a technical recession in the third quarter of 2019 after it grew by 0.6% on a quarterly basis and 0.1% on a year-on-year basis. The expansion marks a reversal from the 2.7% decline the country saw in the second quarter, despite falling below the 1.5% quarter-on-quarter and 0.3% year-on-year growth projected by economists polled by Reuters. Separately, Singapore’s central bank also eased monetary policy by reducing the Singapore dollar nominal effective exchange rate.

Trade war rejuvenates Malaysia’s ‘Silicon Valley’ of Penang state
(14 October 2019) The prolonged US-China trade war has been a boon for Malaysia’s northern Penang state which has seen foreign direct investment to the state grow by 11 times in the first half of 2019 to around US$2 billion. These figures are expected to continue growing as the federal government promises further tax incentives next year to promote its electrical and electronics (E&E) industry. The country’s E&E exports grew by 0.7% year-on-year to US$59 billion in the first eight months of 2019, though total exports dipped 0.4% to US$155.32 billion.

Government allocates funds to expand palm oil market
(14 October 2019) The Malaysian government announced that it has allocated US$6.4 million to support the Malaysian Palm Oil Board’s efforts to promote palm oil in addition to a US$131.2 million loan fund for smallholders in its Budget 2020. These collateral-free loans will be provided at a 2% annual interest rate for a 12-year term, including a four-year moratorium on repayment. These efforts, among others, are part of the government’s plans to boost the demand for palm oil by up to 500,000 tonnes annually.

Forests continued to be cleared for oil palm plantations despite moratorium
(14 October 2019) Forests continue to be cleared for oil palm plantations in Indonesia despite a moratorium on the issuance of new permits imposed in September 2018, with data from the forestry ministry showing an increase from 5.4 million hectares cleared last year to 5.9 million hectares in July this year. In response to concerns from civil society groups, a senior government official said that the government has postponed the clearing of 3.1 million hectares of 12 million hectares surveyed by the ministry due to lack of necessary licenses, in addition to ensuring that companies allocate 20% of their plantation to grow high conservation value forests.