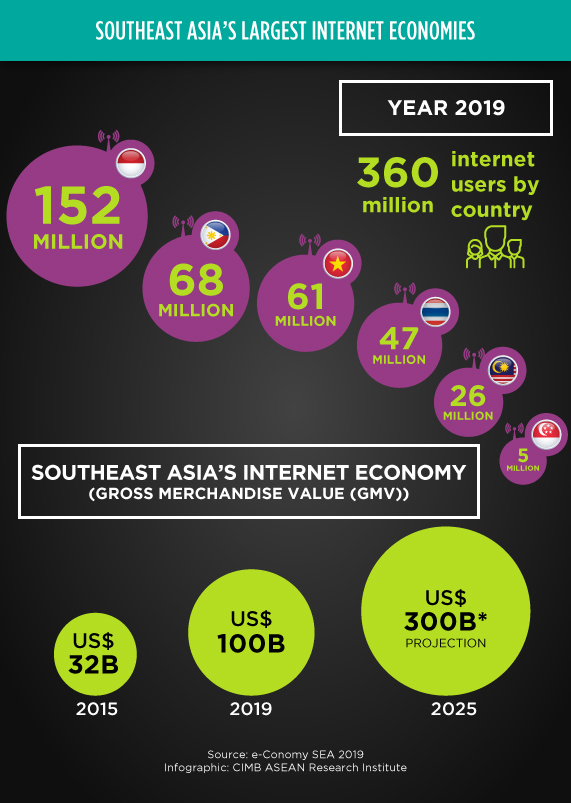 Southeast Asia’s internet economy to hit US$300 billion by 2025
(7 October 2019) Southeast Asia’s digital economy is projected to grow by 200% in the next five years from an estimated US$100 billion this year to US$300 billion by 2025, according to this year’s edition of the e-Conomy SEA report. The report, which studies the region’s six largest economies, also found mobile internet users in Southeast Asia to be the most engaged in the world, with 90% of 360 million internet users in the region gaining access via smartphones. Growth in the region is led by Indonesia and Vietnam, in which their internet economies have been growing by 40% year-on-year.

Singapore and Indonesia to renew US$10 billion currency pact for a year
(8 October 2019) Singapore and Indonesia announced this week that the local currency swap and US dollar repurchase agreement signed by Prime Minister Lee Hsien Loong and President Joko Widodo last year will be renewed on existing terms for another year. With this, the central banks of both countries will continue to obtain each other’s currencies at the prevailing exchange rate, as well as US dollars from each other in exchange for government securities, with agreements to reverse the transaction at the same rate on a specified maturity date.

Malaysian exports fall 0.8% y-o-y in August against a forecast rise
(4 October 2019) Malaysia’s exports saw a 0.8% year-on-year fall in August at US$19.37 billion in an unexpected turn after July’s positive rebound. The fall in exports, which was far from the 2.5% growth forecast by economists in a Reuters poll, was largely attributed to the 7.4% drop in exports of electrical and electronic (E&E) products during the month due to lower demand from China and Japan. Malaysia’s exports to China also fell 2.8% in August despite exports of palm oil and palm-based products growing by 23.3% on the year. Malaysia’s trade surplus in August narrowed to US$2.61 billion from US$3.42 billion in July.

Malaysia sweetens tax incentives for companies to set up hubs
(8 October 2019) The Malaysian Investment Development Authority (MIDA) announced this week that it would increase tax incentives under the Principal Hub (PH) incentive programme for companies who set up shop in the country to conduct their regional or global business. Under the programme, companies will enjoy a 10% corporate tax rate for their operations instead of the prevailing 24%. Furthermore, companies who have yet to enter the Malaysian market can apply for tax rates of between 0%-5% for 10 years depending on their investment commitments.

Indonesia to revise 18 regulations to facilitate trade and foreign investments
(4 October 2019) Indonesia’s Trade Ministry is planning to revise, if not revoke, some 18 ministerial regulations — 11 on imports and 7 on exports — to better facilitate trade and investment. According to senior ministry officials, the laws being reviewed include one on gross fixed capital formation and another on used capital goods imports. These plans were announced following a recent World Bank report which showed that Indonesia’s net FDI inflows only accounted for 1.9% of GDP in 2018 — much lower than Cambodia’s 11.8% and Vietnam’s 5.9%.

Cambodia backtracks on self-employed foreigners ban
(8 October 2019) Cambodia’s labour ministry announced last week that it has withdrawn its proposal to bar foreigners from running small businesses and pursuing self-employment. According to a ministry spokesperson, the ban was lifted following requests from the private sector. He said that this is because certain sectors such as the tourism and service sector require foreign investment and therefore foreign nationals should be allowed to be self-employed. Representatives from 50 labour groups have since published a joint statement urging the government to reinstate the directive and protect local labour.

Large oil palm estates without MSPO certification to face fine and possible suspension
(7 October 2019) The Malaysian Palm Oil Board (MPOB) announced this week that oil palm estates and palm oil mills of over 40.47 hectares who fail to obtain the Malaysian Sustainable Palm Oil (MSPO) certification or begin the process of doing so starting 2020 will face legal consequences. This will include a fine as well as possible suspension, cancellation or non-renewal of licences. As of the end of August, only 50.6% of the country’s 5.85 million hectares of oil palm plantations and 64.29% of its palm oil mills have been certified.

Filipino, Russian firms sign MOUs in trade and investment worth US$12.6 million
(5 October 2019) Filipino and Russian firms and business associations inked 10 trade and investment agreements worth US$12.6 million during President Rodrigo Duterte’s visit to Moscow last week. According to the Philippines’ trade secretary Ramon Lopez, these included a memorandum of understanding (MoU) to export agriculture and aquaculture products to Russia and as well as a distributorship agreement that would allow Russian watches and vehicles to be distributed in the Philippines. Furthermore, documents were signed to boost cooperation in the areas of psychophysics, nuclear energy, and trade and investment.

US apparel imports from Cambodia and Vietnam grew in August
(7 October 2019) The US’ apparel imports from two Southeast Asian countries rose in August, with Cambodia leading the way in terms of growth with a 28.47% spike in exports to the US reaching 115 million square metre equivalents (SME). Vietnam, who remains the US’ second largest apparel supplier after China, also saw its export volume growing by 1.57% to 335 million SME. According to a US industry survey released earlier this year, 83% of respondents expect to reduce sourcing from China over the next two years. These figures suggest that Southeast Asian countries, particularly Cambodia and Vietnam, are the top choices for apparel producers looking to decrease sourcing from China in the near term.

Singapore tops WEF competitiveness index
(9 October 2019) Singapore overtook the US as the world’s most competitive country, according to the World Economic Forum’s global competitiveness rankings which took into account factors such as a country’s enabling environment, human capital and innovation ecosystem. In the ranking, Singapore ranked first in terms of infrastructure, health, labour market functioning and financial system development. Malaysia came in second in ASEAN at 27th place globally, followed by Thailand at 40th place, and Indonesia, which dropped five spots to 50th place globally.