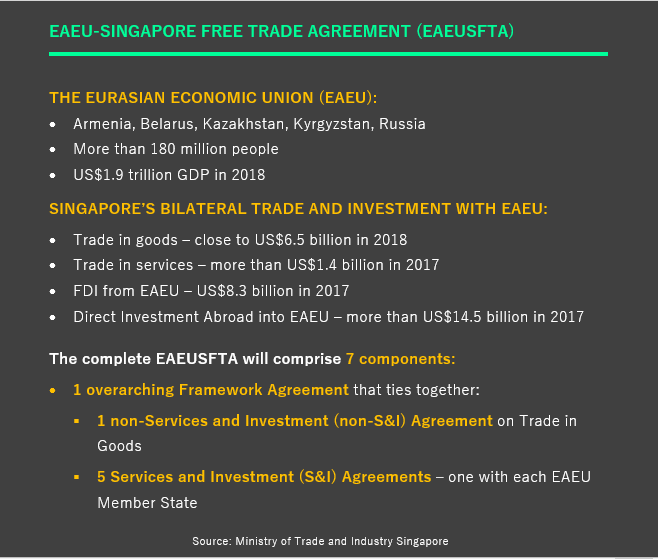 Singapore inks free trade deal with the Eurasian Economic Union
(2 October 2019) Singapore and the Eurasian Economic Union (EAEU) signed two agreements this week, namely a Framework Agreement and a non-Services and Investment (non-S&I) Agreement to boost trade through reduced tariff and non-tariff barriers, part of a comprehensive free trade deal. For instance, EAEU members will either lower or remove tariffs on 90% of exports from Singapore. Additionally, Singapore also inked a Services and Investment (S&I) Agreement with Armenia, as it continues to negotiate similar agreements with the other four EAEU countries — Belarus, Kazakhstan, Kyrgyzstan and Russia.

Bilateral trade up 14.1% year-on-year in 2018
(2 October 2019) Trade between Malaysia and Thailand saw a 14.1% year-on-year increase from US$22.96 billion in 2017 to US$26.19 billion in 2018, according to the Malaysia External Trade Development Corporation (Matrade). Of the sum, Malaysian exports were worth US$14.14 billion, while its imports were worth US$12.05 billion. Furthermore, bilateral trade has so far reached US$14.67 billion in the first seven months of this year, with Malaysia’s top five exports to Thailand being crude oil, chemicals, electronic integrated circuits, electrical machinery and components, computer components and accessories. Thailand is Malaysia’s second largest ASEAN trading partner and its 5th largest trading partner globally.

Brunei and Singapore to form joint working group to boost agrifood sector
(2 October 2019) Singapore senior minister Teo Chee Hean’s visit to Brunei concluded with both sides agreeing to form a joint working group to boost the countries’ agrifood sector, starting with cooperation in the aquaculture industry. Ultimately, the working group aims to facilitate public-private cooperation in investments, research and development, capacity-building and quality assurance. The joint working group will be co-chaired by the permanent secretaries of Brunei’s primary resources and tourism ministry and Singapore’s trade and investment ministry, both of whom will report to a panel of ministers from both countries.

Commerce and banking joint committee lowers 2019 growth and export forecasts
(2 October 2019) The Thai Joint Standing Committee on Commerce, Industry and Banking has lowered the country’s growth forecast from between 2.9% to 3.3% to between 2.7% and 3.0% as it sees slower economic growth in 3Q19. The committee also revised its export outlook from between -1% and 1% to between -2% and 0% due to global economic uncertainties, the prolonged US-China trade war and the surging baht. Nevertheless, the committee expects the government’s economic stimulus “Eat, Shop, Spend” campaign to inject around US$653.7 million to US$980.5 million into the economy, though it also expects floods to cost the economy almost as much.

Vietnam’s trade surplus in September expected to narrow to US$500 million
(29 September 2019) Vietnamese imports is expected to grow 15.6% year-on-year reaching US$22.5 billion in September, according to the latest government data; and thus will likely decrease its September trade surplus to US$500 million from the US$3.44 billion surplus it saw in August. The country’s exports in the first nine months of 2019 is forecasted to have risen 8.2% on the year reaching US$194.3 billion, with imports also expected to rise by 8.9% to US$188.4 billion. The US was Vietnam’s top export destination during the same period with a turnover of US$44.9 billion, representing a 28.2% in year-on-year growth.

ASEAN demand for Myanmar maize rises as Chinese demand dries up
(2 October 2019) Myanmar has been able to offset lower maize exports to China this year with the help of other ASEAN countries who have increased their imports of the crop. For instance, both Thailand and Vietnam have upped their imports of maize from Myanmar by four times to 400,000 tonnes and 40,000 tonnes, respectively this year. Additionally, Laos and the Philippines bought 20,000 tonnes and 33,000 tonnes, respectively, this year. Myanmar exported over 3.67 million tonnes of maize to China through both legal and illegal channels last year, but the volume dropped sharply due to China’s call for a nine-month halt on maize exports from Myanmar to crack down on illegal shipments.

Efforts to attract companies relocating from China intensifies
(27 September 2019) Thailand, Malaysia and Vietnam are among the Southeast Asian countries leading the race to attract companies looking to shift their production base outside China. Competition is rife between Thailand and Malaysia as they both target higher-end manufacturers. Thailand has recently introduced a new range of relocation incentives that includes a five-year 50% corporate tax cut while Malaysia has set up an investment board to encourage relocations. Vietnam, on the other hand, is targeting deals across the spectrum as it promotes lower wages, proximity to China and easier business procedures.

Malaysian telco infrastructure provider edotco Group mulls Vietnam entry
(29 September 2019) Malaysian telecommunications group Axiata’s infrastructure unit edotco Group said last week that it is “actively looking at Thailand and Vietnam” while also consolidating its presence in its key markets — Malaysia, Myanmar, Bangladesh, Cambodia, Sri Lanka and Pakistan. Edotco Group had revealed in June that the Asia Pacific region holds a lot of growth potential for the company, with Vietnam as a key target in its expansion plans. According to local players in Vietnam, there is plenty of room for foreign investors in the domestic market, especially since only 27 of every 100 households have internet access and the number of 4G subscribers is projected to grow nine-fold in the period between 2019 and 2024.

ASEAN
(3 October 2019) Singapore announced this week the establishment of a new ASEAN-Singapore Cybersecurity Centre of Excellence (ASCCE) and a new committee to develop a regional cybersecurity action plan to boost the online defences of ASEAN countries. According to Singaporean communications and information minister S. Iswaran, the ASCCE will spend US$30 million in the next five years on capacity-building programmes to train national and regional emergency response teams and promote information sharing among experts in relation to cybersecurity cases.

Latest RCEP meeting “very fruitful”, says Thai government
(2 October 2019) The 28th and latest round of negotiations on the Regional Comprehensive Economic Partnership (RCEP) held in Da Nang, Vietnam in late September were “very fruitful” and yielded “very impressive progress” as representatives of the countries involved “became more flexible,” resulting in the conclusion of 13 of the 20 chapters in the proposed agreement, according to Thai trade negotiations head Auramon Supthaweethum. She said all RCEP chapters are expected to be concluded later this year. The next round of talks will be held in Bangkok on October 12 during the 9th RCEP Ministerial Meeting.