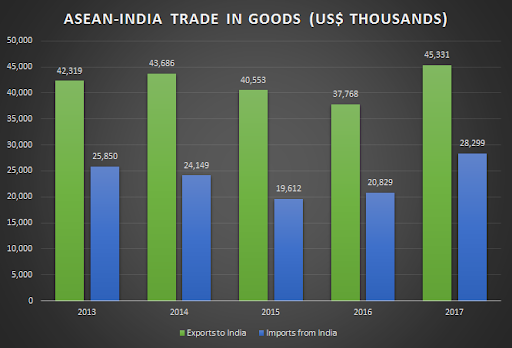 ASEAN, India agree to review free trade agreement
(10 September 2019) ASEAN and India agreed during the recent 16th ASEAN Economic Ministers-India consultations held in Bangkok to review the existing ASEAN-India trade in goods agreement which first came into force in January 2010 to boost trade and investment between them. A joint committee will be formed to undertake the review and submit an update at the next ministerial meeting. Trade between the parties totalled US$80.8 billion in 2018 and US$73.6 billion in 2017.

Higher trade and foreign investments for ASEAN in 2018
(8 September 2019) ASEAN recorded year-on-year growth of 8.7% for trade in goods and 10.6% for trade in services in 2018, according to the 51st ASEAN Economic Ministers’ (AEM) Meeting joint statement. Furthermore, the bloc received 5.3% more FDI last year than the year before, reaching US$154.7 billion. The economic ministers also noted that the region was able to sustain aggregate growth at 5.2% in 2018, similar to the aggregate growth in 2017. However, they expect growth to moderate to 4.8% in 2019 and 4.9% in 2020.

ASEAN economic ministers approve four bills on Industry 4.0
(7 September 2019) The AEM Meeting held in Bangkok last week also saw the passing of four bills that aims to prepare ASEAN for the Fourth Industrial Revolution (4IR) or Industry 4.0, according to Thai commerce minister Jurin Laksanawisit. The first bill was related to an ASEAN digital framework for the 2019-2025 period, the second bill covered the 4IR, the third bill focused on human capital development for the 4IR, and the fourth bill detailed the need to promote digitalisation among micro, small and medium enterprises.

Laos, Thailand, Malaysia kick off ASEAN Power Grid project
(7 September 2019) Laos, Thailand and Malaysia (LTM) became pioneers in advancing the ASEAN Power Grid (APG) with the establishment of the LTM Power Integration Project (PIP) and a commitment to increase the maximum committed energy capacity under the project to 300 MW during the recent 37th ASEAN Ministers on Energy Meeting (AMEM) held in Bangkok. According to Malaysian energy minister Yeo Bee Yin, Malaysia is also in talks with Singapore to join the PIP and the countries could start trading electricity as early as next year or in 2021.

India agrees to reduce export tariff on Indonesian palm oil
(11 September 2019) India has agreed to lower tariffs on Indonesian refined, bleached and deodorised palm oil by five percentage points to 45% to allow it to compete on a level playing field with Malaysian palm oil, Indonesian trade minister Enggartiasto Lukita announced on September 10 after his meeting with Indian trade minister Piyush Goyal on the sidelines of the AEM Meeting in Bangkok. In exchange, Indonesia will provide India greater market access for its raw sugar exports by lowering the standard for imported refined crystal sugar from 1,200 to 200.

Indonesia aims to conclude CEPA negotiations with South Korea in October
(9 September 2019) Indonesia and South Korea aim to “substantially conclude” negotiations of their bilateral Comprehensive Economic Partnership Agreement (CEPA) in October 2019, said Indonesian trade minister Enggartiasto Lukita after a meeting with his South Korean counterpart Yoo Myung-Hee on the sidelines of the AEM Meeting in Bangkok. Enggartiasto added that the CEPA will also serve as the umbrella under which investment agreements with South Korea’s Lotte Group and Hyundai will fall under, in order to facilitate their expansion in Indonesia. It is believed that the CEPA will boost trade between both nations to nearly US$30 billion in 2022.

Singapore to ink free trade agreement with Eurasia in October
(9 September 2019) Singapore is slated to sign a free trade agreement with the Eurasian Economic Union (EAEU) during the bloc’s Supreme Eurasian Economic Council meeting on October 1, said Russian deputy economic development minister Timur Maksimov. According to him, both sides are also working on a comprehensive package to allow free movement of goods, services and capital that will likely be inked next year. Singapore will be the second ASEAN country to enjoy free trade with the EAEU behind Vietnam.

Myanmar to create secondary board to enable the trading of non-listed companies
(10 September 2019) The Securities and Exchange Commission of Myanmar (SECM) plans to establish a second board to allow the public to trade shares of companies that are not listed on the main board of the Yangon Stock Exchange (YSX). According to a SECM representative, the move comes as they look to enable the trading of shares of public companies that do not meet the stringent requirements for listing on the YSX. Nevertheless, these companies will also need to meet certain criteria, which are still being determined.

New perks for firms relocating amid trade war
(6 September 2019) Thailand’s economic cabinet approved on September 6 a new investment incentive package that aims to lure foreign firms — especially those in the high technology sector — looking to relocate production outside of China due to the ongoing trade war. The package covers tax incentives, special investment zones for individual countries and plans to change the foreign business law to facilitate foreign investment. According to a senior government official, the new package will allow investment applications submitted to the Board of Investment by 2020 to enjoy additional privileges such as a 50% reduction in corporate income tax for five years.