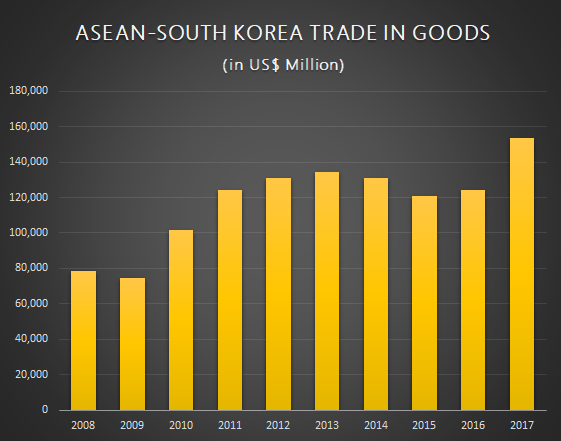 South Korea, Thailand sign six agreements to intensify cooperation
(2 September 2019) South Korean President Moon Jae-in’s visit to Thailand resulted in the signing of six memoranda of understanding (MoU) between the countries, according to the Thai government. This includes MoUs for cooperation between their respective ministries and agencies for the development of smart cities, smart automobiles, smart devices, robotics, automation, bioeconomy, smart technology for water management, transport and infrastructure, as well as military cooperation. Both sides are also expected to form a Korea-Thailand Committee on Economic Cooperation by the end of 2019.

Myanmar, South Korea sign agreements to boost cooperation
(4 September 2019) South Korean President Moon Jae-in’s visit to Myanmar concluded with the signing of five agreements in Nay Pyi Taw. According to local media, this includes a framework agreement for economic development for the 2018-2022 period, an MoU to establish an information hub to facilitate South Korean investment in Myanmar, an MoU on the development of shipping infrastructure, an MoU on cooperation in science and technology, as well as an MoU on cooperation in innovation and new businesses.

Malaysia, Cambodia sign deals on double-taxation avoidance and tourism promotion
(2 September 2019) Malaysian Prime Minister Mahathir Mohamad’s three-day visit to Cambodia this week concluded with the signing of a bilateral double-taxation avoidance agreement to promote greater Malaysian investment in Cambodia, as well as a tourism cooperation agreement to boost tourist arrivals to both countries. According to the Malaysian ambassador to Cambodia, Cambodia received 20 investment pledges from Malaysian businesses in the first quarter of 2019 alone, including a US$4 billion, 2000-room hotel development project. In 2018, Malaysia-Cambodia trade value totalled US$558 million, while during the first six months of 2019 alone, the value had reached US$422.6 million, marking a 39.2% increase as compared with the same period last year.

Thailand, Malaysia look to boost bilateral trade at border
(2 September 2019) The Thai government is considering doubling the number of immigration staff and widening the road at the Sadao-Bukit Kayu Hitam checkpoint from four to six lanes in order to boost the flow of goods and tourists at the Thai-Malaysian border. The proposals were made during Thai commerce minister Jurin Laksanawisit’s visit to the area, during which he also noted that while the checkpoint is now open 24 hours, Thai food exports to Malaysia remains slow because Thailand’s public health officials only worked during office hours. Border trade accounts for 70% of the total trade between both countries.

Sabah and Indonesia to facilitate trade along the Lombok-Makassar Straits
(30 August 2019) Malaysia’s Sabah state port authority POIC Sabah and Indonesia’s largest port operator PELINDO II inked a Port Collaboration Agreement recently to establish POIC Lahad Datu — a port to develop the shipping industry along the Lombok-Makassar Straits with a focus on promoting export-oriented manufacturing, the palm oil industry, investments in petrochemical and logistics, as well as the transshipment of raw materials. The new port received its first ship on September 4. As part of developing shipping in the Lombok-Makassar Straits, Sabah intends to promote closer cooperation with Indonesia’s Kalimantan provinces.

Malaysian developer to build US$624 million housing and commercial project in Yangon
(1 September 2019) Malaysian real estate developer Berjaya Land will begin constructing smart, affordable homes in Myanmar’s capital city in January 2020, said the company’s chief executive, Pee Kang Seng. The US$624 million project will comprise 10,000 residential units plus a 1.2 million square feet commercial segment covering 74 hectares of land in Yangon. The project is developed as a joint venture between Berjaya Land and the Myanmar government, and is expected to last over six years.

Indonesia to ban nickel exports from January 2020
(2 September 2019) Indonesia’s Energy and Mineral Resources Ministry announced this week that the country will halt nickel exports starting January 1 next year as part of its plans to boost the country’s capacity to produce and sell value-added nickel products such as stainless steel slabs while its nickel reserves are limited. To this end, the government aims to establish 25 new nickel smelters on top of its current 11 smelters. Indonesia was the world’s top nickel producer last year with 560,000 tonnes produced and average production is expected to rise by 8.1% in a decade.

New government entity UNN takes over all telco infrastructure in Brunei
(3 September 2019) The Bruneian government’s plan to consolidate the country’s telecommunications network infrastructure came into force on September 1 as all assets from its three telcos — TelBru, DST and Progresif — were officially transferred to a new entity known as Unified National Networks (UNN). According to UNN chief executive Steffen Oehler, the new entity will focus on investing heavily in new, 5G-capable network infrastructure, thus freeing the three telcos to focus on their retail operations.

RCEP negotiations in final stages says Singapore trade minister
(2 September 2019) Negotiations for the Regional Comprehensive Economic Partnership (RCEP) will likely be completed by 2019 or early 2020 “with a bit of political commitment from all sides” and some “tough trade-offs”, Singapore trade minister Chan Chun Sing said during an interview. He added that the RCEP has gone beyond being simply an economic agreement, but that it is also “a strategic signal to the world’s economy on what countries in this part of the world believe in.” Taken together, the countries involved in the RCEP represent a third of the global economy.

Europe’s business confidence in ASEAN still high, but concerns over lack of integration remains
(2 September 2019) The EU-ASEAN Business Council’s latest EU-ASEAN Business Sentiment Survey found that while more European companies are keen to increase their engagement in ASEAN in the coming five years, many remain concerned over the lack of integration within the ASEAN Economic Community. Indeed, only 3% of survey respondents feel that the region’s economic integration is going well, while 58% feel that the state non-tariff barriers within the bloc remains largely the same, and a quarter of those polled feel that the number of non-tariff barriers have actually increased.