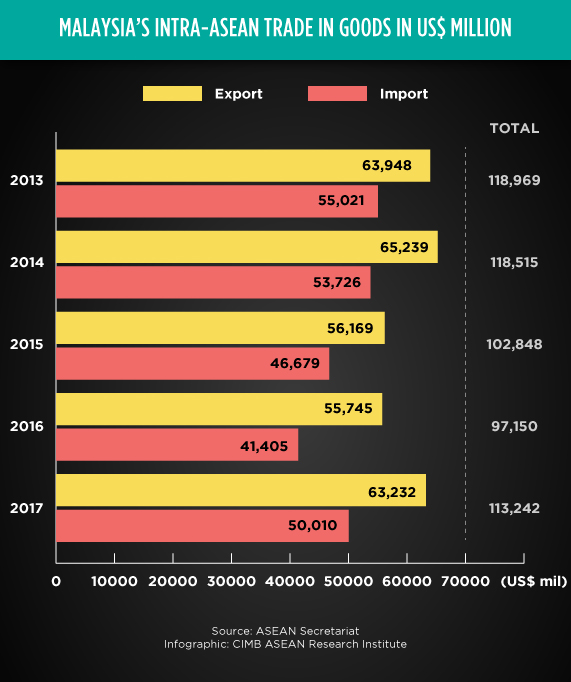 Vietnam, Malaysia agree to deepen strategic partnership
(28 August 2019) Malaysian Prime Minister Mahathir Mohamad’s official visit to Vietnam on August 27 concluded with the leaders of both countries agreeing to ink an action plan to advance Vietnam and Malaysia’s bilateral strategic partnership for the 2020-2025 period. Both Mahathir and his Vietnamese counterpart Nguyen Xuan Phuc lauded the countries’ 13% growth in bilateral trade in 2018 totalling US$11.5 billion as they agreed to aim to raise this figure to US$15 billion. According to local media, Mahathir pledged to increase Malaysian investment in Vietnam and import more Vietnamese products in order to reduce the bilateral trade imbalance. Malaysia is also presently Vietnam’s eighth largest investor with around 600 investments worth over US$12 billion. Furthermore, Mahathir reaffirmed his support for Vietnam’s 2020 ASEAN Chairmanship, while both sides pledged to better leverage the strength of the ASEAN bloc to grow their economies and promote the building of an ASEAN Community.

Government approves US$5.13 billion national connectivity plan
(28 August 2019) The Malaysian government approved the implementation of a five-year, US$5.13 billion National Fiberisation and Connectivity Plan (NFCP) to provide nationwide digital connectivity, said communications and multimedia minister Gobind Singh Deo. According to the minister, the NFCP aims to provide high-speed broadband connectivity with “an average speed of 30 Mbps in 98% of populated areas and gigabit availability in selected industrial areas by 2020 and all state capitals by 2023.” Implementation will begin this year as part of the government’s push to put in place the necessary infrastructure in preparation of the Fourth Industrial Revolution. Separately, Malaysian premier Mahathir Mohamad announced on August 27 that the government will create designated Special Tourism Investment Zones nationwide to attract more technology-based investments to transform the country’s tourism industry. These zones, he said, would help Malaysia move beyond conventional tourism and venture into areas such as medical services, film, adventure sports, content development, religious activities, gaming and green technology.

Malaysia’s Sabah revives barter trading with Indonesia and the Philippines
(25 August 2019) East Malaysia’s Sabah state held an event this week to conduct barter trading of non-subsidised cooking oil with the Philippines and Indonesia, said Sabah chief minister Mohd Shafie Apdal. According to the chief minister, the event aims to revive barter trading between the countries following a two-year ban due to concerns over cross-border smuggling of goods, especially subsidised ones. The event, he said, was also a good way for Sabah to prepare for the possible shift of Indonesia’s capital to Kalimantan, which will likely spur a surge in economic activity in all surrounding areas. Separately, neighbouring Sarawak state’s chief minister Abang Johari Tun Openg shared recently that the state government is mulling the establishment of a trade office in Bangkok (Thailand), Pontianak (Indonesia) and Brunei following its recent establishment of the same in Singapore.

India mulls import tax hike on Malaysian refined palm oil
(26 August 2019) The Indian trade ministry recommends raising tariffs on imports of Malaysian refined palm oil from 45% to 50% for six months, according to a government document seen by a media outlet. The recommendation comes as India’s Directorate General of Trade Remedies (DGTR) found that the current 45% rate has made Malaysian refined palm oil more lucrative than Indian palm oil, thus leading to a 727% year-on-year increase of such imports from Malaysia in the first half of 2019. As such, the recommended hike would not only give Indian producers a much-needed respite, but also help rectify the countries’ bilateral trade balance. In responding to the report, Malaysian primary industries minister Teresa Kok said that they will consider India’s request to allow more Indian goods to be exported to Malaysia to ensure a better trade balance. Meanwhile, Malaysian defence minister Mohamad Sabu revealed that they were in talks with several countries including China, Russia, India, Pakistan, Turkey and Iran on the possibility of using palm oil to pay for defence equipment.

Thailand to create “relocation package” to lure foreign investment
(23 August 2019) Thailand’s Board of Investment (BoI) has been tasked with designing a “relocation package” to attract foreign investors looking for greener pastures outside of China, a senior government official said. According to the official, the necessary approvals for the creation of a special team to coordinate such special investor incentives will be reviewed for approval during the economic cabinet meeting chaired by Prime Minister Prayut Chan-o-cha on August 30. Furthermore, the special scheme will also seek to lure investors from Japan, South Korea, Taiwan, the US and the EU — with the Eastern Economic Corridor (EEC) as the country’s flagship scheme. Meanwhile, Deputy Prime Minister Somkid Jatusripitak expressed his confidence that Thailand’s GDP will pick up in the fourth quarter with the economic stimulus packages and rice price guarantee scheme in place. Thailand’s GDP grew 2.3% in the second quarter of the year and 2.8% in the first.

Thailand wants to be Southeast Asia’s power-trading middleman
(26 August 2019) Thailand is reviving a decades-old plan to position itself as Southeast Asia’s electricity super grid as it steps up its ambition to be the region’s power trading hub. According to Thai energy policy and planning head Wattanapong Kurovat, the plan is to make use of the country’s strategic position in the centre of Southeast Asia by buying more electricity from Laos and then reselling it to Malaysia, Cambodia and Myanmar. Thailand already has the necessary infrastructure for power trading with Laos and Malaysia — it served as the middleman when Malaysia bought 100 MW of electricity from Laos last year. The same, Wattanapong said, will therefore be done with Cambodia and Myanmar, though they will first have to put in place the necessary infrastructure.

Cambodian rice association to meet with EU to discuss safeguard tariffs
(26 August 2019) The Cambodia Rice Federation (CRF) is planning to meet European Union representatives to discuss the bloc’s decision to impose three-year safeguard tariffs on Cambodian rice to protect European producers. According to CRF head Lun Yeng, the association intends to meet the EU as they believe that the EU “is missing vital information” that led to the “misunderstanding” which subsequently led them to “take the wrong course of action.” The CRF’s key argument is that Cambodian rice is simply different from rice produced by farmers in Italy and Spain, and is therefore not a threat to the livelihoods of European farmers. The CRF’s new approach comes after its earlier approach of filing a complaint to the EU over the tariffs yielded no response. Cambodia’s rice exports to the EU in the first half of 2019 fell by almost 50% year-on-year, but the country’s total rice exports grew 3.7% in the first seven of the year nonetheless.

Vietnam, Australia aim to be each other’s top ten trading partners
(23 August 2019) Australian Prime Minister Scott Morrison’s official visit to Vietnam from August 22-24 concluded with the leaders of both countries agreeing to raise their bilateral trade goal from the almost US$7.8 billion achieved last year to US$10 billion in 2020. Both leaders also agreed to push for even more investment from Australia, which presently has investments in almost 500 Vietnamese projects worth over US$2 billion. According to the leaders, the ultimate goal will be to double the amount of investments and be among each other’s top ten trade partners. To this end, the countries will soon host their first ministerial-level Vietnam-Australia economic partnership meeting to boost economic cooperation, in addition to stepping up cooperation in areas such as energy security, digital economy and e-government.

Grab to invest US$500 million in Vietnam over five years
(28 August 2019) Southeast Asian ride-hailing unicorn Grab announced this week that it plans to invest US$500 million in Vietnam over the next five years. More specifically, the company will focus on expanding its transport, food and payment services in the country. According to Grab President Ming Maa, the company sees very similar characteristics between Vietnam and Indonesia. Grab’s Vietnam announcement follows a similar announcement last month that it plans to invest US$2 billion in Indonesia in the coming few years. According to local analysts, Grab’s entry into Vietnam will surely mean fiercer competition in the ride-hailing space, as the company competes for market share with Indonesia’s Go-Jek and Vietnam’s Be.

Shopee extends lead over Lazada in the second quarter of 2019
(26 August 2019) Internet shopping platform Shopee exceeded Lazada in terms of the volume of monthly average visits and monthly active users in the second quarter of the year in six ASEAN markets (Indonesia, Thailand, Vietnam, the Philippines, Malaysia and Singapore), according to an iPrice report. According to the report, Sea-owned Shopee received a monthly average of 200.2 million visits via its desktop and mobile application during the quarter, while Alibaba-owned Lazada received 174.4 million visits. Shopee’s growth was attributed to its celebrity campaigns which attracted users to remain engaged with its application, while Lazada was particularly active during the Ramadan and Raya period in Indonesia and Malaysia. The next three most visited sites after Shopee and Lazada were Indonesia’s Tokopedia, Bukalapak and Blibli.