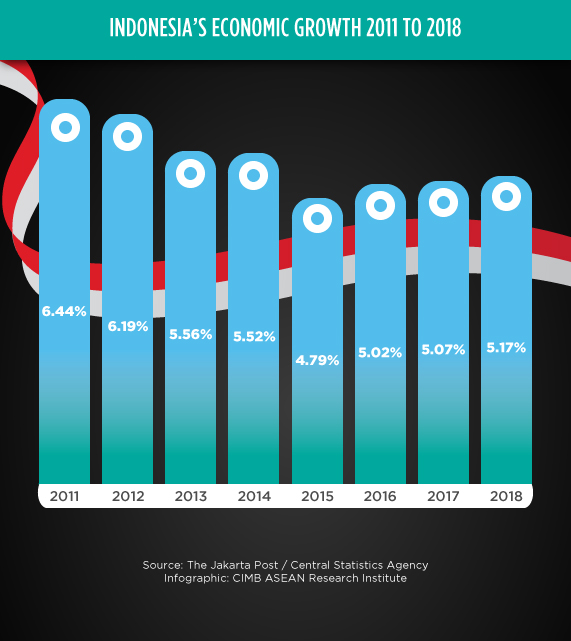 Government aim for moderate rise in revenue, expenditure in 2020 state budget
(17 August 2019) Indonesian President Joko Widodo revealed details in the government’s proposed 2020 state budget on August 17, which aims for a 2.6% increase in state revenue to US$156 billion and a 1.5% increase in state expenditure to US$178 billion. For comparison, Indonesia’s 2019 state budget saw a 13% increase in state revenue and 10% increase in state expenditure from the previous year. According to Joko, who will be sworn in for his second term in October, the 2020 budget focuses on five pillars: human capital development, infrastructure improvement, social protection, regional autonomy and anticipation of global uncertainty. Nevertheless, in a post-budget briefing, finance minister Sri Mulyani Indrawati noted that the numbers proposed were not “fixed,” and that it “might be difficult to accelerate” growth in 2020 due to weakening global economic growth. The question, she said, is whether domestic demand will be able to offset such risks.

Government unveils US$10.27 billion economic stimulus package
(21 August 2019) The Thai government announced on August 20 a US$10.27 billion package to stimulate the country’s economy. These incentives include (i) a US$32.50 handout via registered e-wallets and further rebates for citizens travelling domestically outside their home provinces, (ii) visa fee waivers for tourists from 18 countries until April 2020, (iii) US$16.25 in monthly handouts for low-income earners, (iv) US$16.25 in handouts per 1,600 square metre of farmland for four million rice-farming households, and (v) a 0.1% interest rate cut for one-year loans of up to US$9,749. The move comes as Thailand recorded its slowest growth in almost five years in the second quarter of 2019 as the country’s exports — which account for 68% of GDP — continue to be impacted by the US-China trade war. Furthermore, Thailand’s exports to China — its top trade partner — plunged 14.9% on the year in June, not least because of the strength of the Thai baht and the weakening yuan, which is at an 11-year low.

Malaysia’s GDP grows 4.9% in 2Q, exceeding analysts’ forecast
(19 August 2019) The Malaysian economy grew 4.9% in the second quarter of 2019, exceeding its 4.5% expansion in the first quarter of the year and the second quarter of 2018. According to central bank governor Nor Shamsiah Mohd Yunus, the country’s mining sector grew 2.9%, aided by recovery in natural gas output following pipeline disruptions in 2018. Furthermore, the manufacturing sector grew 4.3% due to growing domestic demand, the construction sector grew 0.5% due to improved activity in the high-end residential market, and the services sector grew 6.1% fuelled by continued growth in wholesale and retail trade. However, growth in the agricultural sector slowed from 5.6% in the first quarter to 4.2% in the second quarter, due to weaker natural rubber output and a decline in fishing and forestry. On the whole, the Malaysian economy grew 1% on a quarter-on-quarter basis, with growth in the first half of the year coming in at 4.7%.

Malaysian PM urges Britain to “break with Europe” on palm oil
(19 August 2019) Malaysian Prime Minister Mahathir Mohamad called on Britain to take a “fresh attitude” towards palm oil after it leaves the European Union (EU) on October 31, saying that doing so could mean even better trade relations between the UK and ASEAN. The premier added that engaging palm oil producers and incentivising sustainable production were a better way to promote environmental sustainability, as opposed to singling out a commodity and boycotting it. Mahathir’s comments, which were published in an opinion column on Bloomberg, comes as Malaysia and Indonesia prepare to retaliate against the EU’s directive curbing the use of palm oil in European biodiesel.

Indonesian PM encourages production of palm oil-based aviation fuel
(16 August 2019) Indonesian President Joko Widodo called on local enterprises to produce palm oil-based aviation fuel in order to boost the use of local palm oil and decrease the country’s dependence on aviation fuel imports. The premier’s calls come after his recent announcement that he had instructed stakeholders to expedite the mandatory proportion of diesel blended with crude palm oil from 20% to 30% by January 2020, and 50% by the end of 2020. Separately, trade minister Enggartiasto Lukita confirmed on August 16 that the Indonesian government has submitted a letter to the World Trade Organization challenging the EU’s imposition of 8%-18% in anti-subsidy import duties on Indonesian biodiesel which went into effect on August 14. The duties will be enforced for a four-month period, extendable to five years.

Tripartite rubber council ending rubber export curbs
(19 August 2019) Thailand, Indonesia and Malaysia — which make up the International Tripartite Rubber Council (ITRC) and account for 70% of global natural rubber production — will not be extending their rubber export curbs after the agreed upon term. In March, the ITRC agreed to implement curbs on around 240,000 tonnes of rubber exports over four months to prop up prices for the commodity. According to unnamed Reuters sources, Indonesia and Malaysia have already completed their part in the Agreed Export Tonnage Scheme (AETS) export curbs, while Thailand will likely complete its end of the deal in September. According to Indonesian rubber association chairman Moenarji Soedargo, extensions were not necessary since “supply will be lower by itself” due to a disease afflicting rubber plantations in parts of Indonesia which will lead to an estimated 15% drop in the country’s rubber output this year.

Thailand hopes to collaborate with the state of Sabah in medical tourism, agriculture
(21 August 2019) Thailand is seeking investment opportunities in Malaysia’s Sabah state, especially in the areas of medical tourism and niche tourism, Thai ambassador to Malaysia Narong Sasitorn said during a Thailand-Sabah trade and investment forum held on August 21. According to Narong, Thailand also hopes to participate in the BIMP-EAGA (Brunei, Indonesia, Malaysia and Philippines-East Asia Growth Area), and hopes to do so by using Kota Kinabalu’s land and maritime facilities as a gateway to the growth area. Similarly, he said, Sabah can also leverage on Thailand’s agricultural expertise to meet the state’s goal of increasing its reach in the sector. Sabah chief minister Mohd Shafie Apdal, for his part, said that the state is also looking to expand its automotive, wood processing and manufacturing industries to create new employment opportunities for locals — and that these too are areas for potential collaboration between both countries. Thailand is Sabah’s third largest trading partner in ASEAN while Malaysia is Thailand’s main trading partner in ASEAN with trade valued at US$25 billion in 2018.

President Joko seeks approval from parliament to move capital to Kalimantan
(16 August 2019) Indonesian President Joko Widodo requested on August 16 parliamentary approval to relocate the country’s capital from Jakarta to a city on Kalimantan island. Doing so, he said, would help ensure “Indonesia-centric” development that does not only focus on Jakarta or Java. According to local media, Joko is weighing three cities in the eastern, central and southern parts of Kalimantan, and will make his final selection later this month. Subsequently, he hopes to obtain parliamentary approval by 2020, begin construction in 2021 and start the relocation process in 2024. The Indonesian premier’s announcement to move the capital city to Kalimantan, which is also located on Borneo island, was well received by neighbouring countries. Neighbouring Malaysian Sabah state’s deputy chief minister Wilfred Madius Tangau said that Sabah could be like what Johor is to Singapore, while Malaysia-Singapore Business Council co-chair Nik Norzrul Thani said that the move will likely have multiplier effects for Sabah and that they will seize the opportunity to position the state as a springboard to enter Indonesia and Borneo.

Southeast Asia tech deals total US$6 billion in 1H 2019
(16 August 2019) Southeast Asia recorded US$5.99 billion in capital inflows to the region’s technology companies in the first six months of 2019 — a nearly two-thirds increase from the US$3.6 billion recorded in 2H 2018, according to a report by a Singapore-based venture capital firm. However, when compared on a year-on-year basis, 1H 2019’s inflows came in around 28% lower than the US$8.31 billion recorded during the same period last year. Nevertheless, the report expects 2019’s full-year investment to match 2018’s, what with firms such as Grab, Gojek, Traveloka and Tokopedia continuing to attract sizeable funding rounds, and up-and-comers such as Ninja Van, Taiger, Carousell, Pomelo and Rupiahplus also raising larger funding rounds.