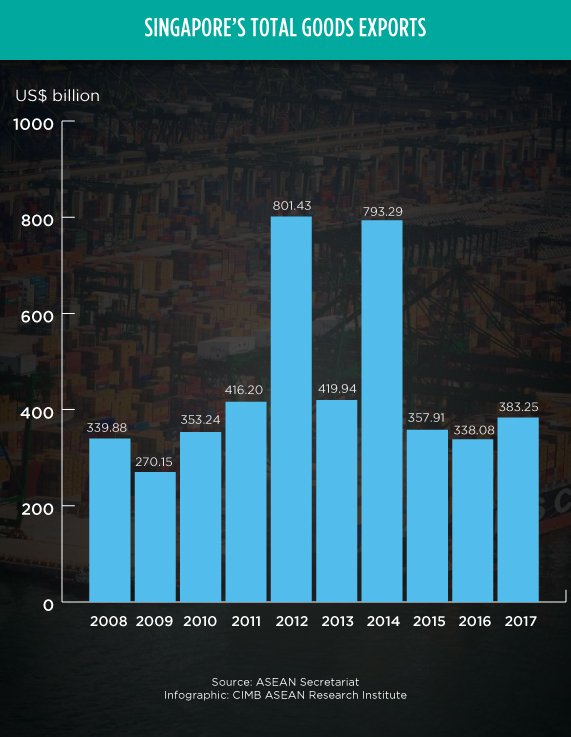 Singapore slashes 2019 growth forecast as it records its slowest growth rate in years in 2Q19
(13 August 2019) Singapore’s Ministry of Trade and Industry announced on August 13 that it has lowered the country’s 2019 growth forecast from 1.5%-2.5% to 0.0%-1.0%, primarily due to the escalating US-China trade war and a “steeper-than-expected” slowdown of the Chinese economy. The new forecast comes after Singapore announced its worst quarterly growth rate in seven years at -3.3% — down from 3.8% in the first quarter of 2019. This also translated to year-on-year growth of only 0.1% — the slowest growth rate the country has seen since the global financial crisis in 2008. Unsurprisingly, Singapore’s wholesale and retail trade sector saw its biggest dip at 3.2%, followed by its manufacturing sector at 3.1%.

Growth forecast cut despite 4.4% manufacturing sector growth in H1
(13 August 2019) The Philippines’ manufacturing sector recorded a 4.4% growth rate in the first half of 2019, fuelled by continued growth in several export markets and stronger domestic demand, said trade secretary Ramon Lopez. Lopez also touted the fact that not only were they were able to achieve such numbers despite the global manufacturing slowdown, but that the Philippines was also the second-fastest growing economy in ASEAN in the second quarter of 2019 with growth coming in at 5.5%. Having said that, Lopez’s ministry has also lowered its growth forecast for exports from 4%-5% to 2% due to weakening external demand caused by the ongoing trade war. Nevertheless, Lopez says that the strategy is to continue growing their reach in new markets such as Russia, India and the Middle East to offset slowing growth in traditional markets.

Vietnam maintains goal of export value growth at 7.5% for 2019
(10 August 2019) Vietnam will keep its export growth target of 7%-7.5% or around US$262 billion while working to find ways to ensure that this target is met despite external challenges, said industry and trade minister Tran Tuan Anh. According to the minister, he has directed the Department of Import and Export to identify new export markets and industries, and work with the Trade Protection Department to review export goods and find ways to remove trade barriers. According to the Import and Export Department head, Vietnam recorded US$145.1 billion in exports in the first seven-month of the year, but they were still US$1 billion short of their seven-month target. As such, the country will need to achieve a monthly average of US$23.2-23.4 billion in export value in the remaining months in order to reach their goal.

Services sector revenue grew 6.5% y-o-y in 2Q19
(13 August 2019) Malaysia’s services sector grew 6.5% from US$98.85 billion to US$105.32 billion on a year-on-year basis and 2.3% on a quarterly basis in the second quarter of 2019, according to data from the Department of Statistics Malaysia (DoSM). Furthermore, the country’s information, communication, transportation and storage sector grew by 6.9% to US$15.73 billion when compared to the first quarter of 2019. However, on a year-on-year basis, the sector’s revenue growth fell 0.5 percentage points to 6.5% during the quarter. Salaries and wages paid also registered a growth of 4.4% year-on-year.

Ministers say new “economic cabinet” won’t interfere with central bank
(9 August 2019) Thai Deputy Prime Minister Somkid Jatusripitak’s recent proposal to form a joint economic committee with representatives from the Finance Ministry, Bank of Thailand, and Securities and Exchange Commission drew much public debate over whether such a committee would mean interference in the central bank’s independent workings. Finance minister Uttama Savanayana responded to the concerns by providing reassurance that there will not be any interference, and that the committee will mainly share information and cooperate to address issues resulting from intensifying global challenges. Meanwhile, four major Thai banks announced that they will lower their Minimum Retail Rate (MRR) by up to 0.25 percentage points starting August 15 to support the local economy. The four banks are Kasikornbank, Krungthai Bank, Bangkok Bank and Siam Commercial Bank.

Commerce Ministry identifies five high potential markets to boost exports
(14 August 2019) The Thai Commerce Ministry has identified five “high-potential” markets to boost its chances of reaching its 3% year-on-year growth target for Thailand’s exports, commerce minister Jurin Laksanawisit said during a press conference after a meeting with private sector representatives on August 14. According to Jurin, a public-private working group will be formed to determine ways to penetrate these key markets in order to “yield tangible results in three to six months.” While he declined to elaborate on what “tangible results” would mean, Jurin said that the target markets were markets around the world which have shown great demand for Thai goods. The five targeted markets include the CLMV countries, the rest of ASEAN, China, the Middle East, and South Asia. Separately, the minister also held meetings with palm oil producers which resulted in an agreement to a proposed price guarantee for palm oil with 18% of oil content at four baht per kilogramme, pending cabinet approval. The proposed guarantee is part of the ministry’s measures to tackle low palm oil prices.

EU imposes duties on Indonesian biodiesel, Indonesia retaliates with tariffs on EU dairy
(14 August 2019) The European Commission announced on August 13 that it has imposed tariffs of 8%-18% in subsidised biodiesel imports from Indonesia in order to level the playing field for producers from the European Union (EU). According to the EU’s statement, the new tariffs are being imposed on a provisional basis and definitive measures may be imposed by mid-December this year once an investigation concludes. In response, Indonesian trade minister Enggartiasto Lukita said that they will retaliate by imposing a 20%-25% tariff on EU dairy products, and that he has asked dairy importers to seek alternative supply sources outside the EU. Separately, Indonesian President Joko Widodo and Malaysian Prime Minister Mahathir Mohamad reiterated their commitment to working together to tackle what they call the EU’s continued discrimination against palm oil.

Indonesia aims for 30% biodiesel in cars by January 2020
(12 August 2019) President Joko Widodo said during a cabinet meeting on August 12 that he is looking to drive domestic demand for crude palm oil (CPO) by increasing its blend ratio in diesel from 20% to 30% by January next year, and then to 50% by the end of 2020. This increase, he added, would help them prepare for any possible pressures on the commodity, while also lowering Indonesia’s imports of oil. Furthermore, a reduced dependence on oil imports would also help alleviate Indonesia’s trade deficit, and by extension, its current account position. According to coordinating economic minister Darmin Nasution, the Energy and Mineral Resources Ministry will complete the necessary B30 tests by mid-September.

US$477 million oil terminal project to be built in Johor state
(14 August 2019) The Malaysian government announced this week that it has approved the development of a US$477 million integrated oil terminal facility in the country’s Iskandar Malaysia development. According to transport minister Anthony Loke, the facility will be built on the man-made Bunker Island, which will be located within southern Johor state’s port limits. Loke added that the location was selected to position the facility as a hub for oil break bulking, make-bulking, blending and redistribution for both domestic and regional markets. Furthermore, the terminal will have a storage capacity of around 1.2 million cubic metres through 61 tanks in five tank pits, and have two jetties with seven berths. Additionally, services such as ship chandelling, stevedoring and logistics support will also be available.

Myanmar, Korea sign joint venture agreement to build industrial facility north of Yangon
(9 August 2019) Myanmar’s Urban and Housing Development Department (UHDD) inked a joint venture agreement with the Korea Land and Housing Cooperation on August 8 to develop a joint industrial complex in northern Yangon. The nearly 558-acre facility in Hlegu, which will be known as the Korea-Myanmar Industrial Complex (KMIC), will house industrial and commercial developments, as well as a vocational school. Speaking at the signing ceremony, construction minister U Han Zaw said that the KMIC is expected to create 50,000 to 100,000 jobs. According to the Yangon Project Bank, the KMIC will cost around US$110 million and be completed by 2023.