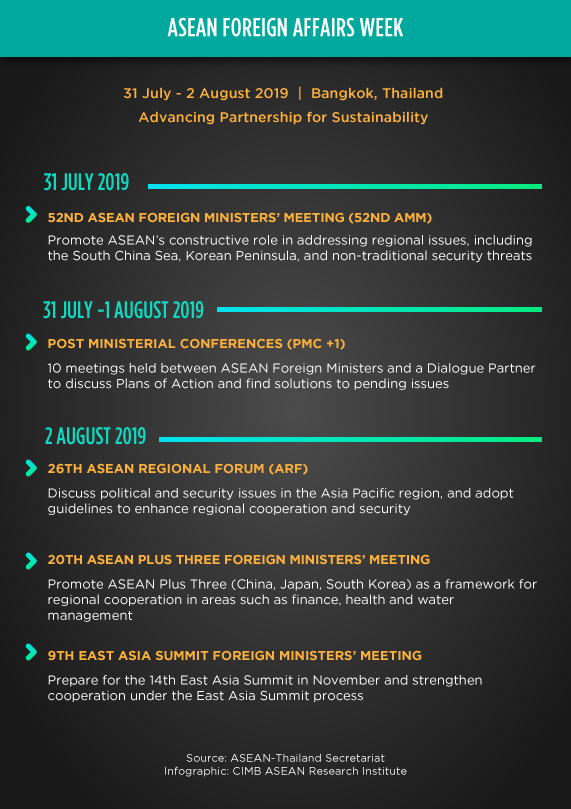 Thailand seeks deeper cooperation as ASEAN ministers meet in Bangkok
(31 July 2019) The 52nd ASEAN Foreign Ministers’ Meeting and related meetings kicked off in Bangkok on July 31 with a call from meeting chair Thailand for ASEAN to seek deeper integration to bolster regional trade and prosperity. Speaking at the opening ceremony, Thai foreign minister Don Pramudwinai told his ASEAN counterparts that the region needed to be “more agile” and “more outward and forward looking than ever before” given external uncertainties. This year’s foreign ministers’ meetings were held against a backdrop of increasing tension in the South China Sea and Korean Peninsula, as well as the discombobulating US-China trade war. Separately, ASEAN Secretary-General Lim Jock Hoi told media on the sidelines of the 3rd ASEAN Media Forum held in Bangkok on July 29 that the ASEAN Single Window and Regional Comprehensive Economic Partnership (RCEP) negotiations were on track for completion by the end of the year.

Indonesian palm oil lobby urges government to raise tariffs on EU dairy products
(31 July 2019) Indonesian Palm Oil Association (GAPKI) is calling on the government to raise import tariffs on European Union (EU) goods such as dairy products in response to the bloc’s move to phase out the use of palm oil in EU biodiesel. GAPKI chairman Joko Supriyono was quoted by the media questioning why the Indonesian government was not using tariffs in retaliation to the EU’s palm oil policies, since “every country uses them.” The chairman’s comments were made following the European Commission’s most recent proposal to levy 8%-18% in duties on Indonesian biodiesel imports on the basis that Indonesian producers of biodiesel benefit from state subsidies including export financing and tax breaks. Indonesian trade security director Pradnyawati has since responded to the EU’s proposal, calling it a “structured, systematic and massive grand design” to block palm oil from competing with vegetable oils produced in Europe, since biodiesel from Indonesia is mostly made from palm oil.

Malaysia urges EU to recognise MSPO certification
(29 July 2019) The Malaysian Ministry of International Trade and Industry (MITI) published a statement on July 29 urging the EU to accept and recognise the Malaysian Sustainable Palm Oil (MSPO) certification scheme, which will become a mandatory measure by the end of 2019. MITI is hoping that the EU will accept and recognise the MSPO as a voluntary scheme under the EU’s Renewable Energy Directive (RED II) that certifies low indirect land use change (ILUC) risk for biofuels and bioliquids. According to MITI, recognition of the MSPO certification is vital because under the EU’s RED II directive for the period 2021-2030, palm oil is categorised as a “high ILUC-risk” crop which carries a higher risk of extension of agriculture land into areas with high carbon stock such as forests, wetlands and peatlands. The EU intends to phase out all crops classified as “high ILUC-risk” by 2030. Meanwhile, Reuters reports that Malaysia looks set to replace Indonesia as India’s largest source of palm oil in 2019, as Malaysia continues to benefit from import duties five percentage points lower than Indonesia’s.

Malaysia invites Turkey to invest in aerospace, automotive, and M&E sectors
(27 July 2019) Malaysian Prime Minister Mahathir Mohamad invited Turkish companies to invest and do business in the country, especially in Malaysia’s aerospace, automotive, and machinery and equipment (M&E) sectors. Mahathir’s invitation was made during a roundtable meeting with Turkish industry leaders in Istanbul on July 27, which was held as part of his four-day official visit to Turkey. According to Mahathir, Malaysia aims to be an energy efficient vehicle (EEV) hub and aerospace hub serving the global market by 2030. As such, Turkish investments in these sectors and other high technology were especially welcome. Mahathir also pointed out Malaysia’s ability to serve as a springboard to the wider ASEAN region which holds a combined market of 650 million people. Meanwhile, Turkish foreign minister Mevlut Cavusonglu announced on July 28 that Turkey aims to enter a free trade agreement with Thailand as soon as possible.

Vietnamese firms seal agreements with Samsung, Hyundai
(1 August 2019) South Korean technology company Samsung SDS and Vietnamese telecommunications company CMC announced a strategic partnership on July 26 which will see both companies cooperating in the development of key technological fields such as smart factories, cloud, security, internet of things for building management systems, digital signage, artificial intelligence, blockchain and big data. According to the companies, one of their first priorities will be to turn Korean factories in Vietnam into smart factories, before rolling out their technology to other Vietnamese firms. Additionally, the companies hope to leverage Samsung SDS’s global reach to position themselves as the Southeast Asian hub for global software development and maintenance. Separately, South Korean carmaker Hyundai’s logistics arm Hyundai Glovis announced that it will open its first Southeast Asian office in Vietnam in 2020 to transport both automotive and non-automotive products to the region.

Vingroup inks deal with Fujitsu, Qualcomm to make 5G phones in Vietnam
(27 June 2019) Vietnam’s largest listed firm by market value Vingroup announced on June 27 that it has inked a deal with US chipmaker Qualcomm and Japan’s Fujitsu to manufacture 5G smartphones in Vietnam. According to Vingroup, the company has started constructing a new facility in Hanoi that will ultimately produce 125 million smartphone units annually, which will be sold to US and European markets beginning April 2020. Meanwhile, Japanese carmaker Mitsubishi Motors announced that it will begin manufacturing plug-in hybrid electric vehicles (PHEVs) at its existing facility in Thailand’s ChonBuri province in the next fiscal year ending March 2021. Mitsubishi’s announcement comes after it became the fourth carmaker after Mercedes-Benz, BMW and SAIC Motor-CP to be awarded investment incentives worth US$100 million by the Thai Board of Investment earlier this year.

Japanese tech group Softbank invests another US$2 billion to expand Indonesian operations
(29 July 2019) Japan technology group Softbank’s founder Masayoshi Son announced on July 29 that the company will invest US$2 billion to expand its operations in Indonesia — through the establishment of Grab’s second headquarters in Jakarta, as well as additional investment in Indonesian online marketplace Tokopedia. According to him, Softbank is particularly interested in increasing its investment in Indonesia’s electric vehicle and renewable energy sectors. Grab Indonesia head Ridzki Kramadibrata later published a statement saying that the company’s new Jakarta headquarters will house its research and development centre and its food delivery arm GrabFood. Meanwhile, coordinating maritime affairs minister Luhut Pandjaitan, said that the government is working on a pilot project to kickstart Jakarta’s electric vehicle ecosystem and that the supporting infrastructure should be ready in the coming three years.

Private sector expresses relief that Duterte vetoed the Security of Tenure bill
(29 July 2019) The Filipino business community are “extremely relieved” that President Rodrigo Duterte has vetoed the Security of Tenure (SOT) bill which sought to end all forms of short-term employment contracting, said Employers’ Confederation of the Philippines (ECOP) head Sergio Ortiz-Luis Jr. According to Ortiz-Luis, should the bill have passed, it would have not only lowered business competitiveness but also lead to more job losses. According to the Philippine Chamber of Commerce and Industry (PCCI), the SOT bill was introduced to protect workers against unscrupulous practices on labour contracting, such as the illegal ENDO (end of five-month contract) practice where companies terminate contractors during their fifth month to avoid paying the required fees once the contractor becomes a regularised staff after six months.

54 nations to attend Singapore Convention on Mediation signing on August 7
(30 July 2019) Fifty-four countries including the US and China have confirmed their attendance to the signing ceremony for the Singapore Convention on Mediation on August 7. The convention, which was adopted six months ago, is the latest United Nations (UN) treaty on mediation. The convention is expected to add teeth to the enforcement of commercial settlement agreements, as its signatories will be obligated to enforce the mediation agreements in court. According to Singapore home affairs and law minister K. Shanmugam, the treaty has so far received “very exceptional” support, especially from large economies who have significant foreign investments. Aside from the US and China, the other countries include Brunei, Japan, South Korea, Australia, Switzerland, Uganda and Vanuatu.

Indonesia mulling issuing ‘diaspora bonds’ to citizens living abroad
(28 July 2019) The Indonesian government is considering the possibility of issuing “diaspora bonds” as part of its efforts to raise funds while lowering its dependence on foreign funds. According to the finance ministry’s financing and risk management head Luky Alfirman, the bonds would target the eight million Indonesian citizens living overseas, which would also provide these citizens with an investment avenue. The type of debt instrument to be used and other details have yet to be determined, though Luky notes that the government is aware that Indonesians in the Middle East may prefer sukuk while those in Japan or the US may prefer conventional securities. He added that the government is also looking at boosting domestic retail ownership of sovereign bonds from the current 3% to raise funds.