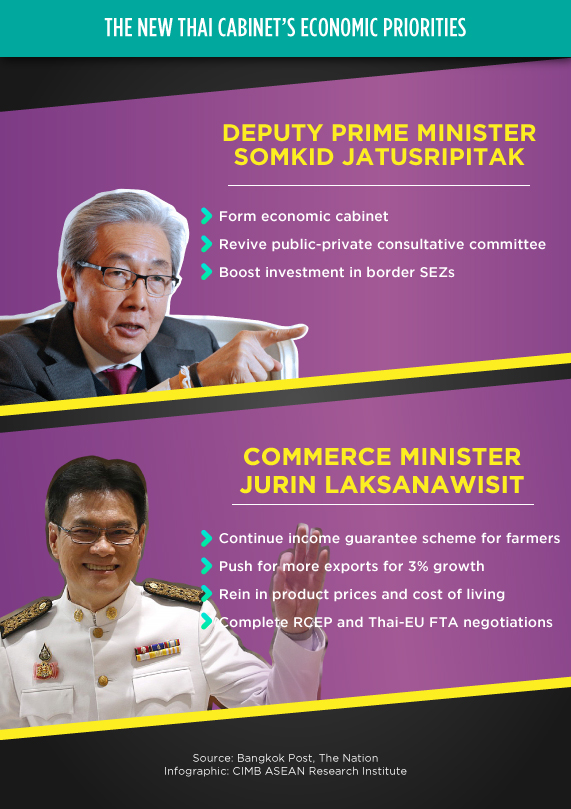 New DPM to form economic cabinet, public-private sector committee
(20 July 2019) Thailand’s newly-minted Deputy Prime Minister Somkid Jatusripitak announced his plans to establish two mechanisms to boost the country’s economic management: firstly, an “economic cabinet” whose membership will comprise ministers holding key economic portfolios such as finance, industry, transport, energy and commerce. This economic cabinet, which aims to drive policy management and increase efficiency, will only meet when there is a special agenda. Secondly, Somkid plans to revive the joint public-private consultative committee (JPPCC) to bolster cooperation between the public and private sectors. This committee will meet two to three times a year.

New commerce minister outlines top policy priorities
(18 July 2019) Thailand’s newly-minted commerce minister Jurin Laksanawisit outlined his four key policy priorities during his first day in office. Firstly, Jurin vowed to resume the revenue guarantee scheme for key economic crops including rice, rubber, oil palm, tapioca and corn for animal feed. Secondly, the minister vouched to push for more exports in the second half of the year to achieve the country’s 3% growth target. Thirdly, Jurin pledged to help rein in product prices through intervention policies to temper the cost of living. Fourthly, the minister will also focus on completing trade negotiations which were put on hold due to the elections, especially negotiations for the Regional Comprehensive Economic Partnership (RCEP) and Thailand-EU free trade agreement.

Government agencies to lure SMEs to invest into border special economic zones
(22 July 2019) Thai Deputy Prime Minister Somkid Jatusripitak has tasked the Industry Ministry, Board of Investment (BoI), and National Economic and Social Development Council (NESDC) to draw up plans to attract small and medium-sized enterprises (SMEs) to invest and set up shop in special economic zones (SEZs) near the border. According to Somkid, large-scale industries have been reluctant to invest in border SEZs despite the government’s many efforts to draw them there in the past three years. According to the NESDC, the 10 border SEZs have 66 investment applications worth US$349.54 million as of July 12.

Indonesia to tax all activities within the digital economy
(24 July 2019) Indonesia’s Taxation Directorate General announced recently that two new taxation directorates have been formed to map out the tax potential of digital economy activities. According to the directorate-general, the goal is to collect taxes from “all activities” in the digital economy, whether through marketplaces, social media or financial technology platforms. Authorities are now working on data analysis of the digital economy to map out areas of tax potential. However, he stressed that while the government seeks to “discipline” taxpayers, they hope to do so without the need to introduce a new tax regulation. In commenting on the matter, the Indonesian E-commerce Association said that it will be a challenge to tax sales made through social media as these transactions are not executed through social media platforms.

Exports up by 15% in the first five months of 2019, in part due to US demand
(23 July 2019) Cambodia’s exports in the first five months of 2019 rose by over 15% on the year totalling US$5.3 billion, according to a report published by the Ministry of Economy and Finance. Furthermore, the country’s imports grew 21.5% on the year reaching US$8.2 billion. According to the report, the rise in exports was largely fuelled by stronger demand from the US for shipments of travel goods, with US imports of Cambodian goods having totalled US$3.8 billion in 2018, an increase of 24.8% year-on-year. In addition, the rise in exports has also been attributed to “accelerating business models, economic diversification, and the expansion of target markets” that have enabled the country to grow and reduce pressure from external risks.

Inflation down to 1.2% in June partially due to steep decline in electricity and gas prices
Singapore’s core inflation dipped 1.2% in June from 1.3% in May, according to the latest data from the Monetary Authority of Singapore (MAS) and Ministry of Trade and Industry (MTI). According to the authorities, the decline can be attributed to a steeper decline in electricity and gas prices, as well as lower inflation in services and retail. Furthermore, Singapore’s consumer price index inflation eased to 0.6% on the year in June from May’s 0.9%, mainly due to lower inflation in private road transport, services and retail, as well as the larger decline in electricity, gas and accommodation inflation.

Government aims to double rice production this year
(20 July 2019) Brunei’s Ministry of Primary Resources and Tourism (MPRT) hopes to double rice production and ensure that the country is at least 10% self-sufficient. To this end, the ministry has put in place “better irrigation, agrotechnology and high-yield rice strains” at what will be the country’s largest rice cultivation site in Kandol, Belait. It is hoped that the new facility, which begins operations in October, will boost the current output of 1,500 tonnes, which provides only 5% of national rice self-sufficiency. Brunei’s rice was mostly imported from Thailand, Vietnam and Cambodia in 2018. In 2018, the government budgeted US$45 million to invest in new technologies, irrigation systems, and farming programmes, with total rice production that year reaching 1,569 metric tonnes (24% short of the 1,950 tonne target).

Jollibee buys loss-making Coffee Bean for US$350 million
(24 July 2019) The Philippines’ homegrown restaurant chain Jollibee Food Corp. announced on July 24 that it will acquire US-based Coffee Bean & Tea Leaf for US$350 million. According to Jollibee chair Tony Tan Caktiong, the acquisition is expected to increase the company’s global sales by 14% and expand its current network of stores by over 25%. However, analysts have expressed their scepticism over the acquisition since Coffee Bean’s 2018 losses equated to around 12% of Jollibee’s profit in 2018.