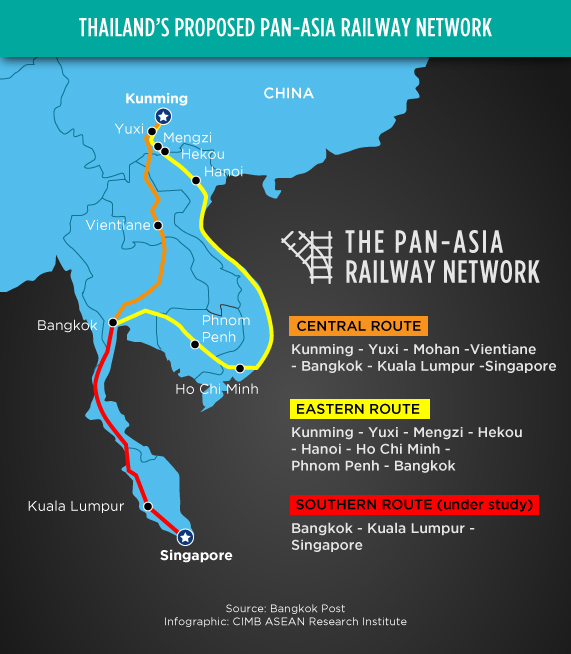 Thailand plans “Trans-ASEAN” bullet train network from China to Singapore
(8 July 2019) Thailand is planning a high-speed rail network known as the Pan-Asia Railway Network that starts in China and ends in Singapore as part of its plan to be the logistics hub of ASEAN, said Thai deputy transport minister Pailin Chuchottawoen. Under the plan, all routes will also run through major ASEAN cities such as Vientiane, Kuala Lumpur, Hanoi, Ho Chi Minh, Phnom Penh and Singapore — with Bangkok serving as the central node connecting the network. The 3,193-kilometre network will be built in stages and is projected to cost US$67.45 billion. Furthermore, the network will also be connected with Bangkok’s existing commuter line, airport rail link and other domestic rail routes through the Bang Sue “grand station” slated for completion in 2021. When completed, the four-storey Bang Sue station will likely be the largest railway station in ASEAN. According to the Engineering Institute of Thailand’s chief engineer Ratthaphum Parichatpricha, the Thai, Malaysian, Vietnamese and Indonesian governments are also working on a new agreement to standardise manufacturing standards in the railway industry in the hopes of turning these countries from a user of rail technology to a developer and global exporter of such products.

Thailand to link National Single Window with Myanmar, Cambodia and the Philippines
(9 July 2019) The Thai Customs Department plans to link its National Single Window (NSW) with those of Myanmar, Cambodia and the Philippines within the year, department head Krisada Chinavicharana said. This will enable the countries to expedite the exchange of trade-related data through an electronic exchange system to improve trade flows and hopefully bolster Thailand’s score on the World Bank’s Ease of Doing Business index. He added that the department is also developing similar NSW systems to link up with China and South Korea. Meanwhile, Thailand also played host to the ASEAN Trade Facilitation Joint Consultative Committee meeting on July 10 and 11, during which the group discussed matters such as the removal of unnecessary non-tariff measures, reducing production costs for all member states by 10% in 2020, and ensuring that all member states are connected through the ASEAN Single Window customs system. Besides that, Thailand will also be chairing the third ASEAN senior economic officials meeting from July 14 to 18, during which officials will follow up on priority economic issues under the ASEAN Economic Community (AEC) Blueprint 2025

PH to allow cross-border publication of ASEAN capital market research
(8 July 2019) The Philippines’ Securities and Exchange Commission (SEC) published on July 5 draft guidelines to allow capital market professionals in the Philippines to issue capital market research reports in other ASEAN countries and allow other professionals in the region to do the same in the Philippines. According to the SEC, the initiative is implemented in accordance with the ASEAN Capital Market Professional Mobility Framework and aims to enable investors to gain better access to information on ASEAN capital market products, especially ASEAN-listed equities. The general rule under the proposed guidelines is that those looking to publish, share or sell research reports in other ASEAN countries will need to apply for a license from their respective regulators. The license, however, only permits the issuance or promulgation of research reports on shares, bonds, sukuk and units of collective investment schemes such as units of real estate investment trusts and infrastructure funds. So far, the Philippines, Malaysia, Singapore and Thailand have signed on to the mobility framework.

Five MoUs signed at PH-Indonesia investment summit
(7 July 2019) The inaugural Philippines-Indonesia Economic and Investment Summit hosted by the chambers of commerce of both countries in Jakarta recently concluded with the signing of five business memoranda of understanding (MoU). According to the Philippines’ embassy in Jakarta, the five MoUs included agreements between the Philippine Business Club in Indonesia (PBCI) and the Cagayan Economic Zone Authority (CEZA) to promote the CEZA to Indonesian investors, Jet Tech Philippines and Satmarindo Group to develop a coconut mill in Indonesia’s Sulawesi, and Philippine fintech company Weepay Processing and Indonesian companies KOIN TOKO and PT Passpod for e-commerce and digital tourism development respectively. According to the embassy, bilateral economic relations between the countries have grown at an average annual rate of 3.4% in the last five years — mostly trading refined copper and copper concentrates, coal, coffee, coffee extracts, crude coconut oil, automobile parts and accessories.

Go-Jek raises funding from Thailand and Japanese investors
(11 July 2019) Indonesian ride-hailing unicorn Go-Jek announced this week that it has raised undisclosed sums from Thailand’s biggest lender Siam Commercial Bank (SCB) and three Mitsubishi entities — Mitsubishi Motors Corp, Mitsubishi Corp and Mitsubishi UFJ Lease & Finance Co — as part of its Series F financing. While the investments come after Thai Kasikornbank’s mobile wallet partnership (GrabPay) and US$50 million funding deal with Grab in November 2018, SCB co-president Sarat Ruttanaporn stressed that the bank’s investment in Go-Jek is not aimed at escalating competition with Kasikornbank and Grab. Both SCB and Mitsubishi say that they intend to tap into Go-Jek’s expertise and presence to expand their reach in the region’s digital banking, mobility and consumer services market. According to IDC Financial Insights, the ASEAN ride-hailing market is estimated to have a gross merchandise value of US$16.9 billion by 2023, up from US$5.9 billion in 2018 with a compound average growth of 23.4% during the 2018 to 2023 period. Thailand’s ride-hailing market is also expected to account for 20% of the overall ASEAN market.

Vietnam’s EU trade pact, ongoing trade war pummels Thai exports
(6 July 2019) Thai firms, especially those exporting automobiles, computers and electric circuits, are most likely to be impacted by the soon-to-be-enforced EU-Vietnam Free Trade Agreement (EVFTA) and EU-Vietnam Investment Protection Agreement (EVIPA), Thai trade policy and strategy head Pimchanok Vonkorpon said. According to Pimchanok, the agreements provide Vietnam with a significant leg-up over Thailand, who is subject to EU tariffs ever since the bloc withdrew Thailand’s Generalised System of Preferences benefits in 2015. Meanwhile, the Federation of Thai Industries (FTI) reported on July 9 that the country’s electronics and electronic component exports have also been impacted by the ongoing US-China trade war, with exports of the products recording an 11.3% year-on-year drop to US$11.3 billion in the first four months of 2019. According to FTI vice head Gritsada Suptuaychone, both the US and China have reduced orders from Thai exporters — the US, due to the bearish global economy, and China, due to the tariffs imposed by the US. Thai shipments to the US fell 11% year-on-year to US$2.35 billion from January to April, while shipments to China fell 21.5% to US$1.07 billion during the same period.

Trade war, major export markets to determine Singapore’s economic outlook
(8 July 2019) Singaporean trade and industry minister Chan Chun Sing outlined the city state’s strategy to navigate the uncertainty in the global economy in the medium to long term in response to questions in Parliament on July 8. According to Chan, Singapore’s economy will be determined by three primary factors: developments in the US-China trade negotiations, import demand from the country’s major export markets, and possible risks resulting from a disorderly Brexit. Chan’s ministry has also lowered its 2019 growth forecast range from 1.5%-3.5% to 1.5-2.5% due to the effect the prolonged trade war has had on Singapore’s export sectors such as electronics, precision engineering and wholesale trade. As such, Chan highlighted the need for Singapore to be cognisant of other factors that will also shape the country’s long term prospects, such as the future of the multilateral trading system which is currently under stress, the evolving global rules that may affect Singapore’s position as a global hub, as well as emerging technologies.

Cabinet reshuffle expected in October to re-energise economic reforms
(5 July 2019) Indonesian President Joko Widodo is expected to announce a major overhaul of his cabinet in October as he looks to push for greater economic growth in his second term. According to Bloomberg’s anonymous source, incumbent finance minister Sri Mulyani Indrawati will retain her role, while other ministers such as economic affairs coordinating minister Darmin Nasution, state-owned enterprise minister Rini Soemarno, fisheries minister Susi Pudjiastuti and energy minister Ignasius Jonan are unlikely to be included in the new line-up. These changes, according to the source, will be made in line with Joko’s plan to reform the state-owned enterprise sector and update labour and tax laws to boost exports and attract investments. Two of the ministers rumoured to be excluded from the new line-up were also reprimanded by the president during the cabinet meeting on July 8 for being significant contributors to the country’s US$2.14 billion trade deficit in the first five months of the year. According to government data, Indonesia’s exports fell 8.6% year-on-year during the period, while imports fell 9.2%.

PH-EU free trade talks stalled due to human rights concerns
(8 July 2019) The European Union (EU) has suspended the third round of negotiations for a free trade agreement (FTA) with the Philippines due to concerns over human rights issues, trade regulations compliance, and issues relating to investment and intellectual property, according to a Philippine Daily Inquirer report. According to the Inquirer’s anonymous sources, the EU’s concerns over the “human rights results of the drug war” in the country remained the bloc’s primary concern. The first and second round of formal negotiations were held in May 2016 and February 2017 respectively. The Philippines Department of Trade and Industry website states that the government is pursuing an FTA with the EU as it would provide the country with even greater duty-free market access than it currently enjoys under the Generalised System of Preference Plus (GSP+), in addition to ensuring that these benefits are “permanent.” According to the European Commission, the EU is the Philippines’ fourth largest trade partner, accounting for almost 10% of its total trade in 2018.