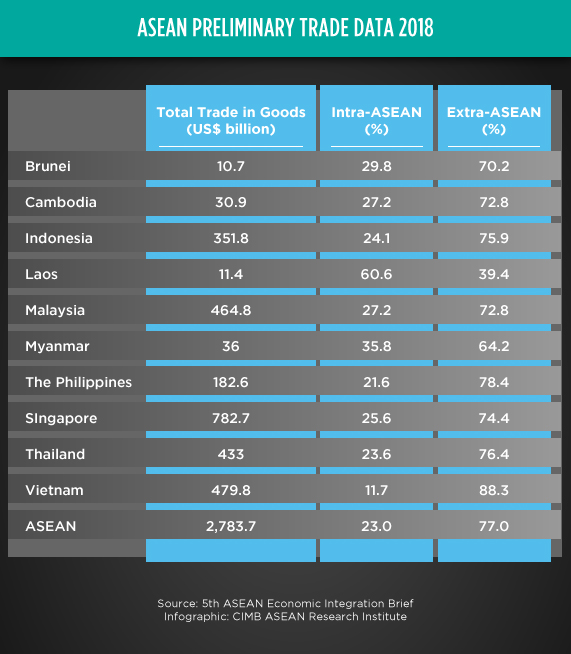 ASEAN leaders urged to work together to improve bargaining power globally
(23 June 2019) The 34th ASEAN Summit hosted by Thailand under the theme “Advancing Partnership for Sustainability” came to a close on June 23 with several notable outcomes. Speaking at a news conference after the summit, summit chair and Thai Prime Minister Prayuth Chan-o-cha emphasised the Southeast Asian bloc’s collective economic strength and its potential as a united bargaining unit in the global economy against the backdrop of an ongoing trade war between the world’s two largest economies. According to Prayuth, the conclusion of negotiations for the Regional Comprehensive Economic Partnership (RCEP) is at the top of the bloc’s agenda as they still hope to finalise the pact by the end of 2019. Other outcomes from the summit include the launch of the ASEAN Indo-Pacific Outlook — a five-page document that aims to serve as a guide for geopolitical cooperation in the region; calls for the de-escalation of tension in the South China Sea with plans for a first reading of the Code of Conduct negotiating draft this year; and, in the case of repatriation of the Rohingya population, “continued support for Myanmar’s commitment to… facilitate the voluntary return of displaced persons in a safe, secure and dignified manner.”

ASEAN to send envoys to India to address RCEP deadlocks
(24 June 2019) ASEAN economic ministers have agreed to send a delegation comprising representatives from Thailand, Indonesia plus ASEAN Secretary-General Lim Jock Hoi to engage with the Indian government in hopes of concluding negotiations over the Regional Comprehensive Economic Partnership (RCEP) as soon as possible. Thailand was selected as they are this year’s ASEAN Chair, while Indonesia is the country coordinator for RCEP negotiations. The decision was made during an ASEAN economic ministers meeting held on the sidelines of the 34th ASEAN Summit in Bangkok. According to Indonesian trade minister Enggartiasto Lukita, the troika will pursue meetings with Indian officials at the soonest with the aim of “substantially concluding” negotiations through the resolution of all market issues. Separately, a Trade Negotiation Committee (TNC) representing the Southeast Asian bloc left for Melbourne for the twenty-sixth round of RCEP negotiations on June 24. According to Thai Prime Minister Prayut Chan-o-cha, it is vital for the RCEP to be concluded this year as it would serve as both a buffer for ASEAN economies impacted by the ongoing trade tensions and a rallying call against global protectionism.

Duterte pushes for more barter trade, flights and shipping routes among BIMP-EAGA members
(24 June 2019) Filipino President Rodrigo Duterte called for greater trade and connectivity between members of the Brunei-Indonesia-Malaysia-Philippines East ASEAN Growth Area (BIMP-EAGA) during the BIMP-EAGA summit held in Bangkok on June 24 on the sidelines of the 34th ASEAN Summit, which was also attended by the leaders of Brunei, Indonesia and Malaysia. He added that at present, only 16% of the 63 Priority Infrastructure Projects under the BIMP-EAGA Vision 2025 have been completed. Duterte also urged Malaysian Prime Minister Mahathir Mohamad to expedite ongoing negotiations for the institutionalisation of barter trade between the Philippines and Malaysia, as he believed that such a system would greatly improve the livelihoods and income of small communities along the country’s border, especially in the newly-established Bangsamoro Autonomous Region in Muslim Mindanao (BARMM).

Indonesia, Vietnam to speed up delimitation of exclusive economic zones
(24 June 2019) Indonesian President Joko Widodo and Vietnamese Prime Minister Nguyen Xuan Phuc’s meeting on the sidelines of the 34th ASEAN Summit in Bangkok concluded with both leaders agreeing to expedite ongoing negotiations related to the delimitation of their exclusive economic zones (EEZ), said Indonesian foreign minister Retno LP Marsudi. Furthermore, Retno shared that both sides have also agreed to restart discussions to develop a set of “provisional common guidelines” to prevent fishing incidents while negotiations over delimitation are ongoing. Indonesia’s EEZ delimitation talks with Vietnam is one of five ongoing border negotiations that the government is engaged in. This is in addition to talks that led to the Philippines’ ratification of a EEZ delimitation agreement with the country earlier this month, which established boundaries in the Mindanao and Celebes seas. According to Indonesian foreign ministry officials, the next step for Indonesia and the Philippines will be to negotiate the continental shelf lines in the same area, in order to demonstrate that the EEZ lines and the continental shelf lines are two different legal regimes.

PH, Indonesia seek to boost trade ties, narrow trade deficit
(24 June 2019) The Philippines’ trade secretary Ramon M. Lopez and Indonesian trade minister Enggartiasto Lukita’s meeting on the sidelines of the ASEAN Summit concluded with both sides agreeing to consider several trade requests from their bilateral counterpart and hold follow-up meetings in a month or two. According to Lopez, the Philippines is keen to narrow its trade imbalance with Indonesia and it hopes to do so by exporting more agricultural products such as shallots and bananas, alcoholic beverages, automotive parts for the Toyota Fortuner SUV, as well as the Mitsubishi Mirage G4 and Toyota Vios sedans when the Philippines becomes the regional production hub for these models. In return, Indonesia has asked the Philippines to review existing safeguards affecting its exports of coffee and ceramic products. Enggartiasto, for his part, said that both sides have agreed to form a small working group to increase bilateral trade. Trade between the countries reached US$1.8 billion in the first quarter of 2019, up from US$1.7 billion during the same period last year.

Vietnam, South Korea to aim for US$100 billion in bilateral trade by 2020
(21 June 2019) Vietnamese Deputy Prime Minister (DPM) Vuong Dinh Hue’s working visit to South Korea concluded with both sides agreeing to reach for US$100 billion in bilateral trade by 2020, up from the US$68.3 billion recorded in 2018. Among the highlights of DPM Hue’s trip was his meeting with his South Korean counterpart Hong Nam-ki, who is also South Korea’s economy and finance minister. During the meeting, DPM Hong announced the South Korean government’s plans to establish a “cooperative centre” in Vietnam to boost the participation of South Korean companies in large-scale infrastructure projects in Vietnam and ensure that these projects are successfully implemented. Separately, the Philippines’ trade and industry secretary Ramon Lopez officiated the opening of the Korea-ASEAN Free Trade Agreement (FTA) Support Centre in Makati City on June 25. Speaking at the ceremony, Lopez said that both the South Korean and Filipino governments aim to conclude negotiations for their bilateral FTA by September and have it signed in November. Meanwhile, the Malaysian Ministry of International Trade and Industry announced on June 27 that it has initiated negotiations for a bilateral FTA with South Korea.

EU-Vietnam trade and investment agreements to be signed on June 30
(25 June 2019) The European Union and Vietnam will sign the EU-Vietnam Free Trade Agreement (EVFTA) on Sunday, June 30 in Hanoi after receiving the go-ahead from the EU Council of Ministers on June 25. The EVFTA, which was finalised in December 2015, comprises two parts: a Trade Agreement which only requires the Council’s approval and European Parliament’s consent, and an Investment Protection Agreement which must be ratified by all EU member states before it can come into force. Under the trade agreement, virtually all customs duties on goods traded between the parties will be eliminated, in addition to a significant reduction in regulatory barriers and overlapping red tape on both sides. For instance, EU companies will be able to compete for procurement tenders in Vietnam on an equal footing with domestic companies, while Vietnam’s textile and apparel exports will gain access to an even larger EU market. Furthermore, the investment protection agreement will provide — as its name suggests — greater protection for investments on both sides, with a new Investment Court System in place to enforce the agreed upon bilateral investment regulations.

New trading license regulations for foreign enterprises
(26 June 2019) Foreign companies who are not registered in Laos and who wish to import goods from or export goods to Laos will need to apply for a trading rights license from the Lao Ministry of Industry and Commerce’s Department of Import and Export beginning June 27. The new regulations came into force after a ministerial decision authorised by industry and commerce minister Khemmani Pholsena on June 6 following complaints from domestic companies that foreign companies were doing business in Laos without the necessary permission from the authorities. According to the ministry, the new regulations will help create “a fair business environment” since foreign companies who wish to export their goods to Laos will only need to obtain a trading rights license moving forward. Nevertheless, local enterprises interviewed by the media felt that the new regulations were unfair since domestic companies must not only obtain a business operations license but also pay taxes.

Many non-tariff barriers remain in ASEAN, claims EU-ABC report
(24 June 2019) Unless ASEAN takes “a much clearer, more sustained and tighter focus on reducing the number and scope of existing non-tariff measures (NTM) and eliminating non-tariff barriers (NTB)” soon, it is neither on track to meet the targets stipulated in the ASEAN Economic Community (AEC) Blueprint 2025 or accomplish the AEC’s objectives, according to a report titled “Non-Tariff Barriers (NTBs) in ASEAN and their elimination from a business perspective,” published on June 22. The report, commissioned by the EU-ASEAN Business Council (EU-ABC) and ASEAN Business Advisory Council (ASEAN BAC), examines the prevalence of NTBs in three key industrial sectors — automotive, agri-food and healthcare — and provides several regional-level recommendations. These include improving systems for collecting information on NTMs and NTBs such as through an open database, developing an institutional body or frameworks to track and tackle NTBs, continuing the harmonisation of standards among ASEAN member states, and working with the private sector to identify, eliminate and conduct compliance reviews of NTBs.

Data shows Japan ahead of China in the Southeast Asian infrastructure race
(23 June 2019) Japan has nearly one and a half times more projects than China in the pipeline in the six largest ASEAN economies — Indonesia, Thailand, Malaysia, Vietnam, Singapore and the Philippines — despite China’s push for expansion in the region in recent years through its signature Belt and Road Initiative (BRI), based on the latest data published by Fitch Solutions. According to Fitch, whose conclusion was drawn based only on “pending projects” in the stages of planning, feasibility study, tender and currently under construction, there are currently US$367 billion worth of Japan-backed projects and US$255 billion worth of China-backed projects in the six countries. Vietnam accounted for over half of Japan’s total pending projects, with the Hanoi-Ho Chi Minh City high-speed railway accounting for US$58.7 billion of the total US$209 billion worth of Japanese investments in the country. Meanwhile, Indonesia accounted for 36% or US$93 billion of China’s total pending projects, with the largest project being the US$17.8 billion Kayan River hydropower plant.