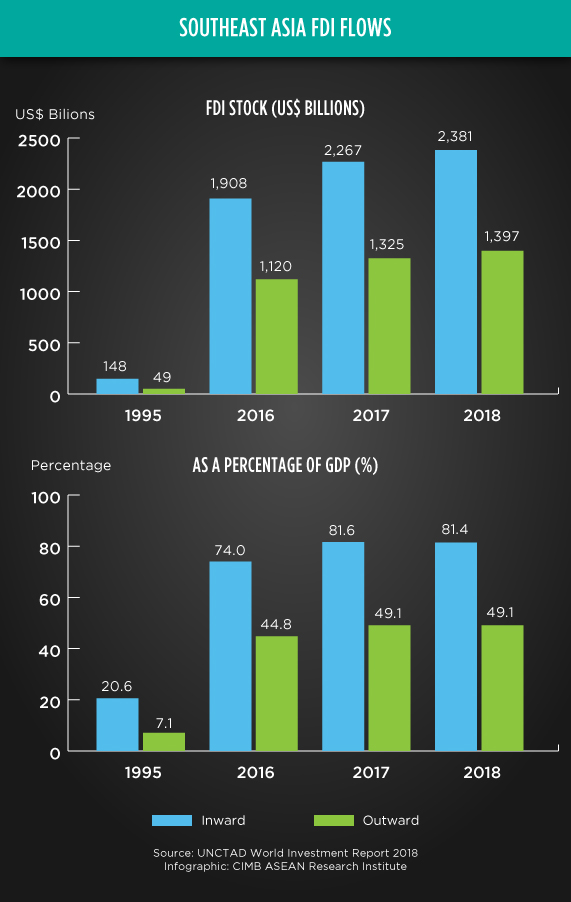 Southeast Asia defies global foreign investment downturn
(12 June 2019) Southeast Asia bucked global foreign direct investment (FDI) trends as FDI inflows to the region reached a record high of US$149 billion in 2018, according to the United Nations Conference on Trade and Development’s (UNCTAD) latest World Investment Report published on June 12. According to the report, global FDI fell by 13% to US$1.3 trillion in 2018 as uncertainties linger in the global economic environment due to the increasingly intense US-China trade war, especially in strategic sectors such as digital and mobile technology. However, the report noted that the “developing Asia” region recorded a 4% rise in FDI reaching US$512 billion, representing 39% of global FDI inflows last year. The report further noted that the ASEAN bloc received US$10 billion more in FDI than mainland China, with Singapore being the top FDI destination among the 10 ASEAN countries. Indonesia, Thailand and Vietnam also recorded significant increases in FDI. According to the report, FDI inflows into Singapore not only accounted for around half of the total received by ASEAN countries in 2018, but was also significantly higher than the FDI attracted by the entire African continent, as well as other Asian countries such as India (US$42 billion) and Indonesia (US$22 billion).

ASEAN outpaces global manufacturing growth in May
(11 June 2019) The ASEAN manufacturing sector improved at a stronger pace despite the general slowdown in global output, according to the Purchasing Managers’ Index (PMI) for May 2019 published by IHS Markit. According to the index, global output slowed to 51.2 in May from 52.1 in April, representing a decline for the second consecutive month and the slowest expansion of global output since June 2016. However, output in the ASEAN region expanded at a stronger pace, with five of the seven ASEAN countries on the index reporting stronger operating conditions: Indonesia’s PMI reached its highest in nine months at 51.6, the Philippines’ PMI expanded for the first time in six months to 51.2, Vietnam’s PMI rode on growing consumer demand to reach 52.0, Myanmar’s PMI reached its highest since April 2018 at 54.2, and Thailand’s PMI continued rising for the fourth consecutive month to reach 50.7. Meanwhile, Singapore’s PMI dipped to 52.1 as it marked its first decline in export orders in three months, while Malaysia’s PMI came in at 48.8 — a figure that analysts say indicate that the Malaysian business environment may be starting to brighten again.

Government to cut investment processes to expedite approvals
(12 June 2019) Malaysian Prime Minister Mahathir Mohamad announced on June 11 that the government is looking to reduce the number of processes involved for investors and traders to do business in and with the country. For instance, there are up to 60 processes involved when it came to investing in the industrial and construction sector — a number that the government’s chief secretary has been tasked to reduce. Meanwhile, the Economic Action Council (EAC) secretariat also issued a statement after the meeting, in which they announced their decision to revive the National Productivity Council (NPC) to set and drive the country’s strategic productivity agenda comprehensively. Furthermore, the statement shared the EAC’s deliberations on the need to lower regulatory costs especially in the tourism sector, and said that the Economic Affairs Ministry has started preparing the country’s five-year development plan for the 2021-2025 period.

Digital economy agency to bring in US$1.2 billion in investments over coming years
(10 June 2019) The Malaysia Digital Economy Corp (MDEC) is currently in discussion with over 10 global companies who have expressed interest in investing some US$1.2 billion in the country in the coming years, said MDEC head Surina Shukri. According to her, the companies were engaged during investment missions to the US, Britain, China and Japan, and the proposed investments will be in areas such as cloud and data centres, e-commerce, cybersecurity, artificial intelligence (AI) and big data. Aside from these areas, there are also plans to invest in the gaming and animation sectors, as well as in initiatives such as a free school to learn computer coding. The Malaysian government expects the digital economy to contribute to 20% of the country’s gross domestic product (GDP) by 2020, up from 18.3% in 2017.

Power, manufacturing propel 40% jump in investment approvals from January to May
(12 June 2019) Investments approved by the Philippines’ Board of Investments (BOI) saw a 40% year-on-year increase reaching US$5.6 billion in the first five months of 2019, up from US$4.0 billion in approvals during the same period last year. Of the sum, domestic investments saw a 11.47% increase reaching US$4.3 billion — representing 77% of total investments approved. Foreign investments also recorded a significant jump as it saw a 871% increase from US$132 million to US$1.3 billion during the period. The sharp rise in investments were largely attributed to the 74.08% increase in the power sector totalling US$3.6 billion and investments in the manufacturing sector which more than doubled to US$857 million. Singapore remained the Philippines’ largest source of foreign capital with investments totalling US$680 million, followed by the Netherlands, Thailand, Japan and the US. Nevertheless, Filipino trade secretary Ramon M. Lopez noted the drop in the country’s FDI inflows in 2018 as per the UNCTAD’s World Investment Report, saying that the government was working on modernising incentives through infrastructure development and the revision of laws such as the Retail Trade Law and the Foreign Investment Negative List in order to attract more foreign investors.

Trade ministry wants e-commerce sites regulated to protect consumer rights
(10 June 2019) The Philippines’ trade undersecretary Ruth B. Castelo is calling for the passing of a separate legislation to regulate e-commerce websites operating in the country in order to better protect consumer rights. According to Castelo, the Department of Trade and Industry (DTI) is already working on including provisions related to e-commerce in the proposed revisions to the existing Consumer Act, but said that a separate law to regulate these platforms were necessary. Ideally, the law would require e-commerce platforms to register as a formal entity with the Securities and Exchange Commission and apply for a license from a regulator such as the Department of Information and Communications Technology (DICT) in order to operate. Castelo’s remarks were made in response to recent controversy surrounding e-commerce site Shopee, who allegedly modified the mechanics of a major promotional campaign halfway through the event. According to the Philippines’ E-Commerce Roadmap 2016-2020, e-commerce is expected to contribute to 25% of the country’s GDP by 2020 and produce at least 100,000 micro, small and medium enterprises involved in the digital economy.

ASEAN Chair to seek partners and investors from outside the region for the smart cities initiative
(8 June 2019) Thailand, as this year’s ASEAN chair, is looking to form partnerships with and draw investments from non-ASEAN countries with strong expertise in new technologies such as South Korea, China and Japan for the development of the ASEAN Smart Cities Network (ASCN) initiative, said Thai digital economy and society minister Pichet Durongkaveroj. Pichet’s comment was made during the ASCN Roundtable Meeting held on June 7. Launched in 2018, the ASCN aims to turn 26 pilot cities in ASEAN into sustainable smart cities through the development of innovative technological infrastructure, technological systems and cultures. Back at home, in 2018 the Thai government has identified 10 zones in seven provinces in which to begin rolling out smart city infrastructure. The government has also announced plans to implement smart city infrastructure in 30 zones in 24 provinces in 2019, and 100 zones in 76 provinces plus Bangkok by 2022.

South Korea pursuing customs deals with ASEAN countries to facilitate bilateral trade
(12 June 2019) The Korea Customs Service is pursuing Authorised Economic Operator (AEO) and Mutual Recognition Arrangement (MRA) agreements with ASEAN countries, according to a statement by the customs agency published on June 12. According to the statement, the agency’s commissioner Kim Yung-moon has thus far held meetings with his counterparts from Indonesia, Vietnam and the Philippines to discuss ways to enhance bilateral trade as part of South Korea’s goal of reaching US$200 billion in trade with the Southeast Asian bloc by 2020. Meanwhile, in speaking at an event promoting Thai-Korea trade, Korea Trade and Investment Promotion Agency (KOTRA) head Kwon Pyung-oh urged the Thai government to step up its deregulation and promotional efforts in order to achieve the targeted 5% growth rate for bilateral trade in 2019. According to the Thai Commerce Ministry, trade between Thailand and South Korea saw a year-on-year decline of 1.14% or US$4.47 billion in the first quarter of 2019, with exports declining by 4.13% to US$1.57 billion.

Thailand seeks to restart FTA negotiations with the EU
(11 June 2019) Thailand hopes to resume its negotiations for a free trade agreement (FTA) with the EU in the second half of 2019 after it has formed a new government, said the Thai Commerce Ministry’s trade negotiations department head Auramon Supthaweethum. To this end, Thai and EU trade representatives have held a meeting to discuss the possibility of reviving said negotiations ever since it was halted in 2014. According to Auramon, an FTA with the EU was important to offset the decline in global trade caused by the ongoing US-China trade war — trade between Thailand and the EU, for instance, grew only 6% in 2018 compared to the 10.8% growth it recorded in 2017. Furthermore, Thai-EU trade recorded a 11% decline in the first quarter of 2019, with two-way trade for the first four months of the year totalling US$13.4 billion, down from US$15.1 billion in the first quarter of last year. According to local analysts, Thailand faces growing competition from Vietnam, who stand to benefit from the Vietnam-EU FTA which is set to become active in the third quarter of this year.

Vietnam ready to act as a bridge to connect ASEAN and the EAEU
(10 June 2019) As the first ASEAN country to sign a free trade agreement (FTA) with the Eurasian Economic Union (EAEU), Vietnam can be a gateway for businesses from the EAEU and Russia who want to enter ASEAN and vice versa, said Vietnamese industry and trade deputy minister Hoang Quoc Vuong during the St. Petersburg International Economic Forum held in Russia recently. According to the deputy minister, trade between Vietnam and the EAEU increased by 103% ever since it came into force in 2016, reaching almost US$6.1 billion last year. Also present at the forum was Cambodia’s commerce ministry secretary Kamrang Tekreth, who told local media that Cambodia hopes to pursue a FTA with the EAEU in order to boost trade and cooperation between the parties.