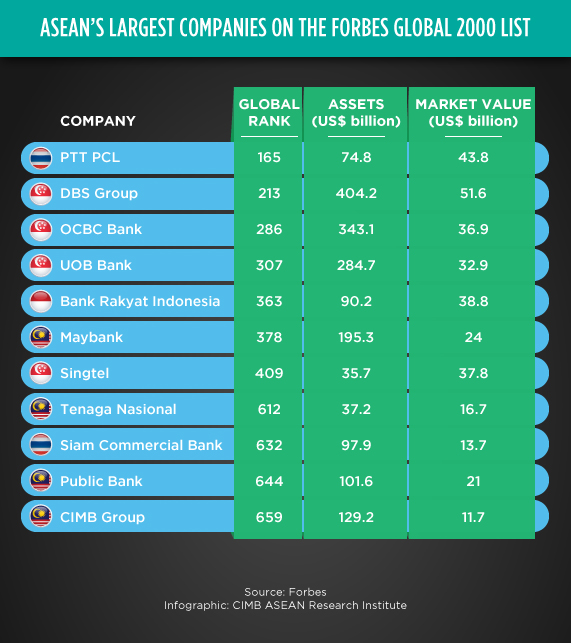 ASEAN firms among the world’s largest companies
(17 May 2019) A total of 53 firms from six ASEAN countries were listed on Forbes’ annual list of the 2000 largest companies in the world. Of the 53, 15 were based in Thailand, 13 in Singapore, nine in Malaysia, six in Indonesia, six in the Philippines, and four in Vietnam. Most of the 53 companies, as with those ranked from other countries around the world, were firms from the financial and oil and gas sectors. The rankings were calculated based on four metrics of equal weighting: revenue, profits, assets and market value. Unsurprisingly, the US and China dominated the global top 10 rankings, with the Industrial and Commercial Bank of China taking the top spot again for the seventh consecutive year. Back in Southeast Asia, the list of top firms was largely represented by companies in Thailand, Singapore and Malaysia. Heading the list is Thai state-owned oil and gas company PTT Public Company Limited with a market cap of US$43.8 billion, followed by Singapore’s DBS Bank and Oversea-Chinese Banking Corporation (OCBC).

Indonesia’s US$412 billion plan to rebuild the country
(17 May 2019) The Indonesian government is putting together a US$412 billion plan for the 2020-2024 period as part of President Joko Widodo’s economic growth strategy, said national development planning minister Bambang Brodjonegoro. This strategy will largely bank on infrastructure development to boost economic growth throughout the country’s 17,000 islands, such as through the construction of airports and energy projects. According to the minister, most of the US$412 billion will likely be funded by the government (40%), state-owned enterprises (25%), and the private sector. Around 60% of the budget is earmarked for transportation-related infrastructure. The minister said the government prioritised greater connectivity within the country as it was the “only way” to have higher economic growth. He added that the goal is to establish “the equivalent of a highway for the skies” such as through the 25 planned airports and related infrastructure, especially in remote regions.

Q1 GDP growth falls to weakest in over four years, outlook murky
(21 May 2019) The Thai economy expanded at 2.8% in the first quarter of 2019 — its slowest pace in over four years, according to the latest figures published by its state planning agency on May 21. The slower pace was largely attributed to falling exports due to external headwinds and lower public investment due to political uncertainty caused by Thailand’s recent elections. Seeing that growth in the first quarter failed to meet its forecast, the agency has also lowered its projections for the country’s 2019 growth to 3.3% to 3.8%, down from the previous 3.5% to 4.5% forecast made in February. Furthermore, the agency lowered its annual export growth projections to 2.2% from 4.1%, due to the 3.6% year-on-year drop during the first quarter of 2019. With the latest GDP data published by Thailand and Singapore, every major Southeast Asian economy has now reported slower annual growth in the first quarter in 2019.

Singapore’s economic growth slows to decade low
(21 May 2019) Singapore’s economy grew by only 1.2% year-on-year in the first quarter of 2019 — its lowest in almost a decade as manufacturing contracted due to the US-China trade war, according to government data released on May 21. Similar to Thailand, Singapore’s economy missed its government’s earlier 1.3% growth forecast for the quarter. The 1.2% growth recorded also marks the slowest annual expansion for any quarter since April to June 2009, when the country’s GDP saw a 1.7% decline from a year earlier. As such, the Singaporean government has lowered its 2019 growth forecast to 1.5% to 2.5%, from the previous 1.5% to 3.5% forecasted. Furthermore, the government has also lowered its 2019 forecast for non-oil domestic exports to 2.0%. The slowdown in Singapore’s economy has been attributed to the prolonged trade tensions between the US and China.

Malaysia records historic 94.8% y-o-y increase in FDI inflows in 1Q19
(18 May 2019) Malaysia recorded US$5.18 billion in foreign direct investment (FDI) in the first quarter of 2019, according to a statement by finance minister Lim Guan Eng. According to Lim, since FDI in the first quarter of 2018 amounted to US$2.67 billion, the 94.8% year-on-year increase to US$5.18 billion meant that the country’s FDI had just reached its “highest level ever recorded in Malaysian history for one quarter.” He further provided that the majority of the investments came from Japan (US$2 billion), followed by Austria (US$883 million) and Hong Kong (US$668 million). Furthermore, Malaysia also recorded a current account surplus of US$3.9 billion in the first quarter or 4.7% of gross national income, up from 3.0% in the previous period. Lim also touted the country’s inflow of 6.7 million tourists in the quarter, saying that it was the largest number of tourist arrivals since the fourth quarter of 2016.

Malaysia targets US$10.3 billion in M&E exports by 2020
(17 May 2019) The Malaysian government expects the country’s mechanical and electrical (M&E) products exports to reach US$10.3 billion by 2020, according to its international trade and industry deputy minister Dr Ong Kian Ming. As such, he urged more local companies to enter the sector as the industry only registered only US$9.7 billion in exports in 2018, against the US$17.6 billion worth of M&E products it imported during the same. According to Ong, Malaysian businesses should seriously consider exploring the sector, since new M&E technologies such as 3D printing devices were not only used for prototyping these days, but were also used for mass production. He also noted the manufacturing sector’s contribution to the country’s 4.5% GDP growth in the first quarter of 2019, although the sector only grew 4.2% during the period compared to the 5.2% growth recorded in the first quarter of 2018. Malaysia primarily exports M&E products to Singapore, US and Japan.

Central Bank of Myanmar to allow more foreign banks to open branches and subsidiaries
(20 May 2019) The Central Bank of Myanmar (CBM) announced on May 17 that it will permit more foreign banks and their subsidiaries to open branches in the country soon. The move comes on the back of the CBM’s earlier announcement that it has granted 13 existing foreign banks licenses to open new branches and provide loans to local enterprises. According to CBM deputy governor U Soe Thein, foreign subsidiaries will be given full licenses to function as local banks, including offering retail banking services. Furthermore, existing foreign bank branches will also be allowed to operate as subsidiaries. The benefits, he explained, are that branches can be closed easily if needed, while subsidiaries can be set up as separate entities whose shares can be sold, transferred and divided. Foreign banks will also be allowed to invest up to 35% of the total capital in joint ventures with local private banks.

Singapore, NZ to step up cooperation in trade, defence and research
(17 May 2019) New Zealand Prime Minister Jacinda Ardern’s official visit to Singapore on May 17 concluded with the signing of the Singapore-New Zealand Enhanced Partnership declaration to deepen cooperation in four key strategic areas. The four areas are (i) trade and economics, (ii) defence and security, (iii) science, technology and innovation, and (iv) people-to-people links. Also signed during Ardern’s meeting with her Singaporean counterpart Lee Hsien Loong were five related agreements and memoranda of understanding. This included the signing of the upgraded New Zealand and Singapore on a Closer Economic Partnership (ANZSCEP), the countries’ bilateral free trade agreement which first came into force in 2001. The ANZSCEP aims to align the original agreement with newer free trade agreements such as the Comprehensive Progressive Agreement for Trans-Pacific Partnership (CPTPP). Bilateral trade between Singapore and New Zealand saw a 12.1% year-on-year increase last year, reaching US$4.1 billion. Singapore is also New Zealand’s seventh-largest trade partner.

PH, Japan to sign investment agreements on AI and data analytics
(22 May 2019) The Philippines hopes to ink several investment agreements during President Rodrigo Duterte’s official visit to Japan next week, including two confirmed ones related to high-technology, artificial intelligence (AI) and data analytics. According to the Department of Trade and Industry (DTI) secretary Ramon Lopez, the government also hopes to arrange a high-level bilateral meeting between President Duterte and Japan Prime Minister Shinzo Abe during the trip. Also on the agenda is the review of the Japan-Philippines Economic Partnership Agreement (JPEAPA), as well as other trade and investment matters. Separately, finance secretary Carlos Dominguez III said that the Philippines is also looking to intensify cooperation with South Korea, beginning with the adoption of South Korea’s technology-based tax systems. According to Dominguez, the government found South Korea’s electronic invoicing and receipts system to be most suitable, and the Korea International Cooperation Agency (KOICA) will be assisting the Philippines’ Bureau of Internal Revenue in the adoption process.

South Korea to set up ASEAN finance centre in 2020
(21 May 2019) The South Korean government is planning to establish a Korea-ASEAN finance support centre in either Bangkok or Jakarta next year, said presidential economic advisor Joo Hyung-chul. Joo’s statement was made during a meeting with the heads of South Korean financial companies and other major industry players. According to Joo, the government will begin the budgeting process for the centre in June and decide on its location by October after conducting due diligence with think tanks such as the Korea Institute for International Economic Policy. This is in line with the government’s efforts in strengthening ties with Southeast Asia. Jakarta is the more financially-viable option since the South Korean government already has an ASEAN representative office in the city, while Bangkok would allow South Korea to collaborate closely with the United Nations office based there. According to the Korea Federation of Banks, there are currently 164 branches and offices of Korean financial companies located in Southeast Asia.