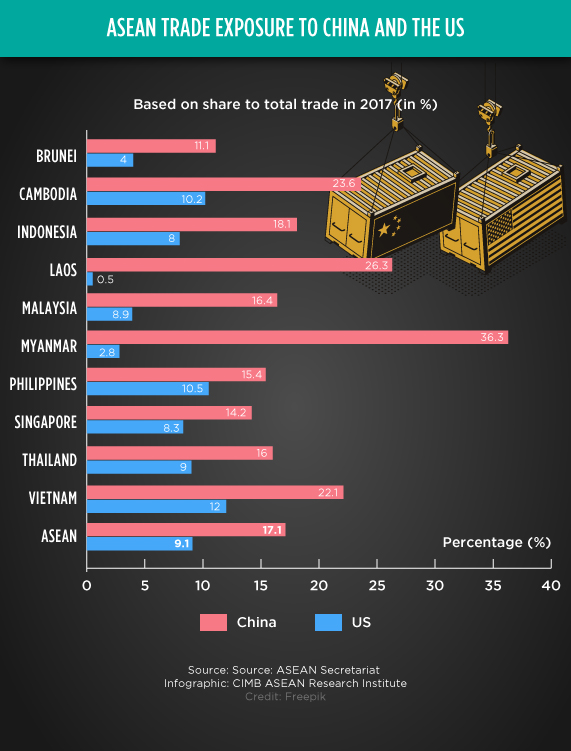 US-China trade war takes its toll on trade in ASEAN’s largest economies
(15 May 2019) Indonesia posted its widest monthly trade deficit in history in April at US$2.5 billion as exports saw a year-on-year decrease of 13.1% — far higher than the projected 7.15% drop, according to the latest figures published by the Indonesian statistics bureau. Furthermore, the month’s imports also failed to meet projections as it only saw a 6.58% year-on-year decrease, as opposed to the projected 12.1% drop. In commenting on the matter, Indonesian statistics bureau chief Suhariyanto said that the economy faced “extraordinary” challenges this year due to the weakening global economy and increased uncertainty caused by the prolonged US-China trade war, while finance minister Sri Mulyani Indrawati said that the country “cannot rely on export as an engine of growth” due to the trade war. Meanwhile, Thailand’s exports reached a four-year low due to both the trade war and the impending EU-Vietnam Free Trade Agreement (EVFTA) that comes into effect on June 1. According to the Thai Commerce Ministry, the country stands to lose between US$5.6 billion to US$6.7 billion in exports this year, equivalent to between 2.2% to 2.6% of last year’s exports. These announcements come on the back of the US announcement on May 10 that it would double duties on US$200 billion worth of Chinese goods, which China responded to by announcing on May 13 that it would raise tariffs on US$60 billion of US exports effective June 1.

Bilateral trade sees 16.5% increase in Q1 2019
(14 May 2019) Trade between Cambodia and Japan saw a 16.5% increase in the first quarter of 2019 as compared to the same period last year, reaching US$558 million, according to the Japan External Trade Organization (JETRO), Of the sum, Cambodian exports to Japan saw a 16% increase reaching US$454 million, while Japanese exports to Cambodia saw a 20% increase totalling US$104 million. The upward trend follows the 27.3% increase in bilateral trade between the countries in 2018, during which Cambodia exported US$1.6 billion worth of goods to Japan. A Cambodian commerce ministry spokesman noted that they have also seen more Japanese investments in light manufacturing and industries that require skilled labour. Meanwhile, Malaysia is reportedly in talks to send blue-collar workers to Japan under a new visa programme launched in April aimed at bringing in more skilled manpower as Japan faces a growing ageing population and dwindling birth rates. Malaysian Prime Minister Mahathir Mohamad will visit Japan later this month to discuss the matter. Separately, the Philippines’ President Rodrigo Duterte’s spokesperson confirmed that Duterte will visit Japan from May 29 to 31 where he is “hoping” to ink agreements with the Japanese government.

Germany will not ban palm oil from Malaysia
(14 May 2019) German ambassador to Malaysia Nikolaus Graf Lambsdorff said in an interview that Germany will not ban palm oil from countries such as Malaysia, as the commodity is cheap, environmentally-friendly and sustainable. However, he urged Malaysia to reduce its dependency on palm oil and consider halting its use in the coming years in line with other European countries. Lambsdorff’s remarks follows Malaysian state news agency Bernama’s report quoting French ambassador to Malaysia Frederic Laplanche saying that the EU and France were not the enemies of palm oil, and that there was, in fact, no ban on palm oil imports, and that the bloc was merely phasing out existing incentives for palm oil to be added into the diesel mix. Meanwhile, Malaysian primary industries minister Teresa Kok, who is on a palm oil promotion tour in Europe, told European media that unless the palm oil issue is settled, there will be no strategic partnership between the EU and ASEAN.

Amnesty for Reuters reporters may not be enough to resolve trade tensions with EU
(12 May 2019) Myanmar’s foreign business community welcomed President U Win Myint pardoning of Reuters journalists Wa Lone and Kyaw Soe Oo on May 7, but expressed doubts that the partial amnesty was enough to convince the EU to roll back its threat to lift Myanmar’s Generalised Scheme of Preferences (GSP) tariff privileges, also known as the Everything But Arms (EBA) scheme. According to members of Myanmar’s foreign business community, the amnesty “removes one high profile issue” which will “certainly send better signals” to international investors, but “the elephant in the room of northern Rakhine still remains”, as well as other concerns over labour rights and freedom of expression. An EU spokesperson quoted by the media responded to the reporters’ release by saying that it was a welcome development but declined to comment on whether it would affect the EU’s pending decision to lift trade privileges.

Singapore surpasses China as Myanmar’s biggest investor
(13 May 2019) Singapore has surpassed China as Myanmar’s largest investor since the start of 2019, according to Myanmar’s Ministry of Investment and Foreign Economic Relations permanent secretary U Aung Naing Oo. However, he noted that some of these investors may not be Singaporean per se but were multinational companies based in Singapore. The secretary also noted that the country has seen an increase in investments from the UK, despite the UK’s ongoing criticisms of Myanmar’s human rights issues. Furthermore, the Myanmar Investment Commission has so far approved a total of US$2.5 billion worth of foreign investments in the 2018-2019 fiscal year which started in October 2018 and ended in April 2019. Nevertheless, U Aung Naing Oo admitted that the foreign investments in the country have slumped in the last four years as investors opt to invest in countries such as neighbouring Thailand, Vietnam and Cambodia where the investment climate and regulations were considered more stable.

Cambodia, Nepal sign agreements to boost bilateral trade and investment
(14 May 2019) Nepali Prime Minister Khadga Prasad Sharma Oli’s three-day official visit to Cambodia concluded with the signing of two agreements with Cambodian Prime Minister Hun Sen to boost cooperation between the countries. The first document signed was a framework agreement on trade and investment, while the second was a memorandum of understanding (MoU) on bilateral cooperation between Cambodia and Nepal’s national chambers of commerce. According to the Cambodian Chamber of Commerce, Nepali investors were particularly interested in the country’s agriculture and tourism industry. Current trade and investment between the countries are relatively small — bilateral trade amounted to only US$210,000 in 2017, even less than the US$250,000 recorded in 2016. The countries mostly traded garments, wood, agricultural products, fabric and machines.

Vietnam, Nepal look to improve trade and investment ties
(12 May 2019) Nepali Prime Minister Khadga Prasad Sharma Oli kicked off his two-country Southeast Asian tour on May 8 with a five-day official visit to Vietnam, where several agreements were signed to develop cooperation mechanisms between the countries. According to a joint statement released after Oli’s talks with Vietnamese Prime Minister Nguyen Xuan Phuc, the documents signed include an MoU on the establishment of bilateral consultation mechanisms between both foreign affairs ministries, negotiating a framework agreement on trade and investment cooperation, and an agreement on visa exemption for diplomatic and official passport holders. Furthermore, both leaders agreed to explore the establishment of a direct air route between the countries and explore new areas of cooperation such as in the areas of energy, renewable energy, high-tech agriculture and tourism. The Vietnamese premier also pledged to support Visit Nepal Year 2020 as well as Nepal’s efforts to graduate from least developed country status as soon as possible.

The Philippines to launch US$70.6 million project to boost export commodities
(11 May 2019) The Philippines’ trade secretary Ramon M. Lopez recently announced that his ministry will soon launch a new programme that aims to accelerate the development of agro enterprises and help them meet global market demands. According to Lopez, the new Rural Agro-Enterprise Partnership for Inclusive Development and Growth (RAPID Growth) project will be led by the Department of Trade and Industry (DTI) and funded by the United Nations’ International Fund for Agriculture Development (IFAD). The project will focus on boosting four primary agricultural value chains — cocoa, coffee, processed fruits and nuts, and coconut — which were selected based on their “lucrative markets, social features and potential to provide sustained economic benefits to small farmers and enterprises.” The project will be implemented in six regions and target unemployed and underemployed rural women and men, with a special focus on women, youth and indigenous people.

New association mulled to help Brunei, Malaysia businesses
(14 May 2019) Malaysia and Brunei are exploring the possibility of establishing a “friendship association” to boost cooperation between businesses in both countries, said Brunei’s high commissioner to Malaysia Data Hj Alaihuddin during a recent Malaysia Healthcare Travel Council (MHTC) event in Kuala Lumpur. According to Alaihuddin, the association’s primary purpose would be to facilitate engagements between businesses, as well as to provide a space for public-private partnerships to blossom. He added that the underlying goal was also to encourage collaboration instead of competition between the countries, and hopes the association will eventually serve as a platform for businesses to “help each other succeed” both within and beyond the region.

Lazada extends e-commerce edge in Southeast Asia despite lull in overall visits
(13 May 2019) Alibaba-backed e-commerce platform Lazada extended its reign as the most popular e-commerce site in Southeast Asia despite a drop in visits to the site in the first quarter of 2019, according to a report by analytics firm App Annie. According to the report, Lazada maintained the highest average monthly active users in Malaysia, Thailand, Singapore and the Philippines during this period, but fell behind Tokopedia and Shopee in Vietnam and Indonesia. Furthermore, the report found that Tencent-backed Shopee saw a 5% increase in visitors in the first three months of 2019, making it the only e-commerce platform in the region to post an increase in quarterly visitors. The report also noted that the region’s homegrown e-commerce giants continue to face competition from native Chinese and American platforms such as Amazon, eBay, AliExpress, and Taobao.