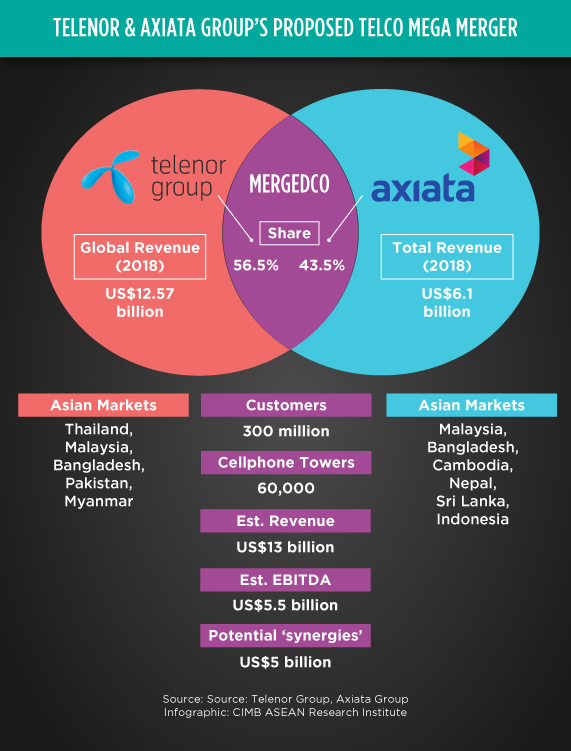 Malaysia’s Axiata and Norway’s Telenor plan one of Asia’s largest cross-border mergers
(6 May 2019) Malaysia’s Axiata Group and Norway’s Telenor Group announced on May 6 that the companies were in talks to merge their South and Southeast Asian operations. According to a Reuters source, the merged entity would be worth US$40 billion, making it one of the largest cross-border mergers Asia has seen. According to Axiata Group head Jamaludin Ibrahim, the deal would combine the scale and capabilities of both companies to drive growth in the highly competitive South and Southeast Asian markets. If merged, the joint entity will have almost 300 million existing customers with operations in nine countries, including Thailand, Malaysia, Indonesia, Pakistan and Bangladesh. Telenor will own 56.5% of the entity and Axiata will own 43.5%. The proposed deal is seen as beneficial to Malaysia, not least because the merged entity would be headquartered in Kuala Lumpur, be listed on the Malaysian stock exchange and come with a proposed regional innovation centre. According to the head of Axiata’s largest shareholder, Khazanah National Shahril Ridza Ridzuan, the innovation centre would create over 100 jobs and generate US$24.1 million in investments annually. The establishment of the merged entity, MergedCo, will reportedly happen by the third quarter of 2020.

UK assures Cambodia of continued trade privileges post-Brexit
(8 May 2019) Trade between Cambodia and the UK has grown over the years as both countries enjoy ‘thriving’ trade relations, said Cambodian acting commerce minister Kem Sithan during his meeting with the UK’s air vice-marshal John Philliban on May 7. According to the acting minister, trade between the countries rose from US$500 million in 2012 to over US$1 billion in 2018. Of the sum, Cambodia exported US$500 million worth of goods to the UK in the first half of last year, and imported US$22 million worth of goods during the same period. Additionally, ministry spokesman Seang Thay said that once the UK leaves the EU, Cambodia will automatically lose its Everything But Arms (EBA) privileges that it enjoys when trading with the EU. However, he said, Cambodia will likely continue to enjoy preferential access to the UK based on World Trade Organization (WTO) regulations.

Cambodia’s exports to the EU could fall by US$654 million annually if EBA suspended
(6 May 2019) Cambodia’s exports to Europe could decline by US$654 million per year if the European Union (EU) goes ahead with lifting the country’s tariff privileges under the bloc’s Everything But Arms (EBA) scheme, according to a World Bank report. The report further projects that if the privileges are withdrawn, tariffs on garment exports would increase by 12%, footwear exports by 16% and bicycle exports by 10%. This would, it notes, come in addition to the EU’s rice tariffs on Cambodian rice which came into force in January. Meanwhile, a group of European garment producers — which includes Nike, Adidas and Levi Strauss — sent a letter to Cambodian Prime Minister Hun Sen on May 2 urging him to take heed of the EU’s concerns and work with them to protect labour rights in the country.

Leading palm oil producers take steps to boost palm oil consumption
(4 May 2019) Malaysian primary industries minister Teresa Kok is currently in the EU with representatives from key Malaysian palm oil agencies on a “palm oil economic and promotion mission” from May 3 to 13, according to a statement by her ministry. During the mission, Kok will visit key EU member states (UK, Belgium, Germany and Italy) to promote palm oil and palm-based products, address anti-palm oil sentiments, as well as engage key European palm oil stakeholders. Closer to home, the Indonesian Biodiesel Producers Association (APROBI) head M.P. Tumanggor told Reuters that the association hopes to expedite road tests for B30 biodiesel in order to increase domestic consumption of the product as soon as possible. According to APROBI, the B30 implementation could boost domestic consumption by up to 10 million kilolitres. Current regulations state that road vehicles will have to start using B30 fuel from 2020. Meanwhile, Thailand’s Energy Ministry has directed the state-owned Electricity Generating Authority of Thailand (EGAT) to purchase 200,000 tonnes of crude palm oil as part of its plan to increase domestic prices of fresh palm nuts and crude palm oil. According to energy minister Siri Jirapongphan, the first batch of 100,000 tonnes should be purchased by May 23.

Thailand aims to revive slumping exports caused by the prolonged trade war
(7 May 2019) Thailand’s Trade and Policy Strategy Office (TPSO) is currently developing plans to boost exports through different methods such as trade promotion activities, plans for market penetration by province/cities, and promotion of border activities, said TPSO head Pimchanok Vonkorpon. They also hope to finalise negotiations on the Regional Comprehensive Economic Partnership (RCEP) by the end of the year. According to Vonkorpon, the TPSO was greatly concerned by the recent drop in exports caused by the prolonged US-China trade war. Thai exports saw a 1.6% decline in the first quarter of 2019, led by a 9.2% drop in exports to China. Thai products that were directly impacted by the trade war include vehicles, computer parts, electrical appliances, tools and office supplies. However, Thai exports to the US saw a 32.2% increase during the same period, and Vonkorpon is optimistic that exports to the US will continue to grow as producers look to substitute Chinese goods.

Trade deficit expands to US$9.8 billion in Q1 as exports slump
(9 May 2019) The Philippines’ trade-in-goods deficit expanded to US$9.8 billion in the first quarter of 2019, up 21% from US$8.1 billion in the same period last year, based on the latest data published by the Philippine Statistics Authority (PSA). According to the data, the widening deficit was caused by a decline in exports and increase in imports — exports in the first quarter saw a year-on-year 3.13% decline from US$16.9 billion to US$16.36 billion, while imports in the first quarter saw a year-on-year 4.68% increase from US$25 billion to US$26.17 billion. Commenting on the matter, president of the Philippine Exporters Confederation (Philexport), Sergio R. Ortiz-Luis Jr. said he does not see things improving for the export sector this year due to the ongoing US-China trade war, as well as other global and local economic factors. Trade secretary Ramon M. Lopez concurred with Ortiz-Luis, saying that the decline in exports can be attributed to supply-driven issues influenced by the trade war.

Government-approved investments rose 46.5% in the first four months of 2019
(6 May 2019) Investment projects registered with the Philippines’ Board of Investments (BOI) saw a 46.49% jump reaching US$5.49 billion in the first four months of 2019, up from US$3.75 billion in the same period in 2018. Energy projects accounted for 64.66% of the total at US$3.55 billion, up 77.75% from US$2 billion in the first four months of 2018. According to trade undersecretary and BOI head Ceferino S. Rodolfo, the rise in green energy investment approvals was in line with the government’s commitment to developing “clean and green” infrastructure systems. He added that while green projects benefit from tax incentives, the companies had to apply for endorsements from the Department of Energy, Environment and Natural Resources before the projects were approved by the BOI. Meanwhile, investment pledges from local companies grew by almost 14% reaching US$4.2 billion, while foreign investment pledges reached US$1.28 billion.

Singapore manufacturing affected by skill shortages and labour curbs
(5 May 2019) Singapore is struggling to meet the country’s growing demands for highly skilled labour despite its ability to attract high-tech manufacturing investments, according to an AFP report. The report cited statistics from the Ministry of Manpower, which provides that one in three job openings in the country in 2018 was left unfilled for at least six months, with employers citing a “lack of candidates with the necessary specialised skills” as one of the key reasons for the slow filling of openings. Previously, the government responded to the public’s unease of the growing number of foreign workers by making it harder to hire in selected sectors and prioritising local recruitment. Furthermore, local education institutions may face an uphill challenge in adjusting their curricula to meet changing industry demands. Nevertheless, according to a Singaporean Institute of Policy Studies analyst, it would appear that, at least for now, Singaporeans have “accepted a trade-off of lower economic growth for a restrictive foreign labour policy, in favour of social considerations.”

ASEAN+3 finance officials agree to promote infrastructure finance and green bonds
(3 May 2019) The ASEAN+3 (China, Japan and South Korea) finance ministers and central bank governors shared their commitment to promote green bonds under a new initiative that they have dubbed the ASEAN Bond Market Initiatives (ABMI) Midterm Roadmap 2019-2022. According to the officials, the roadmap outlines the direction and key activities of the ABMI, aimed at advancing regional financial stability and integration. The ABMI will include the development of the ASEAN+3 Multi-Currency Bond Issuance Framework (AMBIF), as well as contributions to the capital increase proposal of the credit guarantee and investment facility. These initiatives come in addition to an earlier agreement between the officials to promote the use of local currencies in the region to lower financing costs and lessen the countries’ dependence on currencies from outside the region.

Swedish Crown Princess co-chairs bilateral business summit with Vietnamese Deputy Prime Minister
(7 May 2019) This is a “golden” era for bilateral economic, trade and investment cooperation between Sweden and Vietnam, said Vietnamese Deputy Prime Minister Pham Binh Minh during the Vietnam-Sweden Business Summit on May 7. The summit was held in conjunction with the Crown Princess of Sweden Victoria Ingrid Alice Desiree’s official visit to Vietnam on May 6 to 8 in celebration of the 50th anniversary of the countries’ bilateral ties. According to Pham, bilateral trade between Sweden and Vietnam reached US$1.5 billion in 2018. Sweden currently has 67 projects in Vietnam worth US$364 million. Crown Princess Victoria, for her part, expressed support for Vietnam’s continued commitment to the United Nations Sustainable Development Goals (SDGs) and looked forward to greater cooperation between firms in both countries.