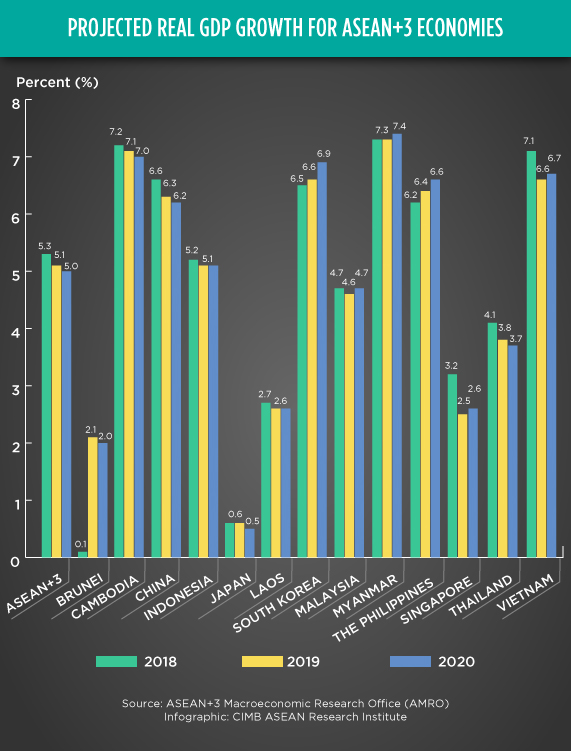 ASEAN+3 economies expected to remain resilient amidst global headwinds
(1 May 2019) The ASEAN+3 economies comprising Southeast Asia, China, Japan and South Korea are expected to remain “resilient” in the face of “heightened global risks and stronger external headwinds” according to the latest ASEAN+3 Regional Economic Outlook (AREO) published on May 1. The outlook is published by the ASEAN+3 Macroeconomic Research Office (AMRO), a financial advisory unit under the Chiang Mai Initiative established by ASEAN+3 nations. According to the AREO, real GDP growth in the ASEAN+3 region is expected to ease to 5.1% this year from 5.3% last year, with the downtrend continuing into 2020 with projected growth at 5.0%. The report also found that economies in the region were in a good position to weather external risks as they had “adequate reserves and fiscal buffers”, with decent growth and inflation within the range projected. Furthermore, the report also indicated that the region’s rising middle class, rapid urbanisation and digitalisation potential were evidence of sound fundamentals in ASEAN+3 markets.

ASEAN manufacturing gauge improves in April
(2 May 2019) Manufacturing in Southeast Asian markets improved marginally to reach 50.4 in April — its highest reading in five months, based on the latest Nikkei-Markit manufacturing purchasing managers’ index (PMI). Of the seven Southeast Asian markets ranked on the PMI, Myanmar, Vietnam and Thailand reported the strongest expansion rate, with Myanmar leading the way at 53.7. On the other hand, the PMI in Malaysia and Singapore continued to contract, with the former recording a slower decline and the latter coming in with the weakest reading at 47.3. According to IHS Markit economist David Owen, the region’s overall manufacturing expansion in April was fuelled by new orders and output, and could also indicate that the impact brought about by global trade tensions was moderating.

Governments ready interventions to support palm oil industry
(27 April 2019) The Malaysian government announced the establishment of a US$120 million soft loan fund for private oil palm smallholders to help bolster their businesses as palm oil prices remain low. According to finance minister Lim Guan Eng, the loans will be provided with a 2% annual interest rate, and it can be used to fund crop replanting. Lim also announced a US$24 million grant for entrepreneurs who obtain the Malaysian Sustainable Palm Oil Certification (MSPO). Meanwhile, the government has also launched a “Love My Palm Oil” campaign to promote the use and benefits of palm oil locally. The slew of announcements come as the EU’s palm oil restrictions look set to pass after the EU Parliament elections in May. Separately, the Indonesian Agriculture Ministry’s director-general of plantation Kasdi Subagyono admitted that the collapse of the palm oil industry would have “an extraordinary impact” on the country’s economy, but added that the government stands ready to protect the 16.2 million workers employed in the palm oil sector who would be affected if the EU goes ahead with its curbs on palm oil.

Revival of Thai-Malaysian train service proposed to boost trade ties
(30 April 2019) Thai Narathiwat province’s industry association proposed that the Thai and Malaysian governments revive the cross-border train route connecting Narathiwat and Kelantan in order to boost bilateral trade between the countries. According to the Narathiwat Provincial Chamber of Commerce president Kitti Wangthammang, such a service would also boost tourism in border towns in both countries. Wangthammang also proposed the creation of a train link between Pattani and Kuala Lumpur. According to reports, the proposal was well received by the Narathiwat train station head. The proposal follows earlier calls for greater economic cooperation between traders in southern Thailand and northern Malaysia, such as through a border trade fair.

Trilateral airport rail link project likely to be signed in mid-May
(30 April 2019) Thai deputy prime minister Somkid Jatusripitak said on April 30 that the State Railway of Thailand (SRT) and a consortium of nine companies led by the Charoen Pokphand Group will likely ink the agreement to move forward with the development of the three-airport rail project in mid-May. The US$6.9 billion high-speed railway will link Don Mueang airport in Bangkok with Suvarnabhumi in Samut Prakan and U-Tapao in Rayong. The nine-company consortium comprises companies from Thailand, China and Japan — which, according to Eastern Economic Corridor office (EECO) head Kanis Saengsupan — is also the first time China and Japan are jointly investing in a third country. He added that the Japanese side will fund the procurement of Hitachi trains, while the Chinese side will help fund the construction of the rail link. Furthermore, Saengsupan shared that the EECO inked an MoU with China’s Henan province on April 28 to develop a joint aviation hub and cooperate on trade and investment.

The Philippines launches safeguard probe on EU float glass imports
(1 May 2019) The European Union requested that the Philippines end its safeguard investigation on the bloc’s float glass exports during a World Trade Organization (WTO) Committee on Safeguards meeting on April 29. The EU’s request was made in response to Filipino trade secretary Ramon M. Lopez’s announcement in February that the country was initiating a preliminary investigation on whether safeguard measures were needed to regulate clear and tinted float glass imports. According to Lopez, the investigation was initiated based on a Department of Trade and Industry (DTI) report claiming that the significant rise in tinted float glass had greatly affected its sole local producer. The EU, however, said that a safeguard measure was “not appropriate” and that the Philippines should instead consider anti-dumping and countervailing measures since 85% of the country’s float glass imports came from one country (China), and other countries combined accounted for less than 5% of the imports.

The Philippines hopes South Korea FTA will boost its e-vehicle industry
(28 April 2019) Filipino industry development and trade promotion undersecretary Ceferino S. Rodolfo recently revealed the government’s hopes that the bilateral free trade agreement (FTA) with South Korea will give the local electric vehicle industry a boost. Rodolfo said that the government hopes to catch up with investments that neighbouring Thailand, Indonesia and Vietnam have received to develop their e-vehicle industry. He added that the Philippines has been trying to get South Korea to set up an e-vehicle assembly plant in the country. To this end, the government is currently evaluating South Korea’s request for tariffs on completely built-up units (CBU) and parts to be lowered from the current 5% rate to zero. According to Rodolfo, electric vehicles are already exempted from excise taxes, and the government is also prepared to negotiate further on tariffs since charging stations infrastructure is a priority item under the country’s Investment Priorities Plan (IPP). In return, he said, the government is asking for greater market access for all Filipino agriculture products.

Five UK technology firms to invest in Malaysia
(2 May 2019) Malaysian communications and multimedia minister Gobind Singh announced on May 2 that five technology companies from the UK have committed to investing in Malaysia. The announcements come on the back of Gobind’s visit to the UK in February. The five companies are (i) software management solution firm Ideagen who will establish a Centre of Excellence in Kuala Lumpur, (ii) artificial intelligence (AI) firm AuditXPRT who will make KL its Southeast Asian hub, (iii) software innovation firm Mitra Innovation who will help build the Malaysian AI ecosystem, (iv) BAE Systems Applied Intelligence who will develop its Global Engineering Centre in KL, and (v) Britain’s largest technology firm Sage who will deliver enterprise management solutions to small and medium enterprises. Furthermore, the Malaysia Digital Economy Corporation (MDEC) will also partner with Scottish Heriot-Watt University to establish a new three-year Data Futures Scholarship Programme to develop data professionals in Malaysia.

ASEAN and Japan to establish a disaster risk insurance facility
(1 May 2019) ASEAN nations and Japan are slated to sign a memorandum of understanding (MoU) for the establishment of the Southeast Asia Disaster Risk Insurance Facility (SEADRIF) during the upcoming ASEAN+3 finance and central bank deputies’ meeting in Fiji in May of this year, according to Filipino finance secretary Carlos Dominguez. His statement was made in response to Japanese deputy prime minister and finance minister Taro Aso, who urged the Philippines to join the six countries — Cambodia, Indonesia, Laos, Myanmar, Singapore, Japan — who have already signed the MoU. According to Aso, SEADRIF will serve as a regional catastrophe risk insurance programme that insures countries against natural disaster. The programme was first established in Laos and Myanmar with support from the World Bank.