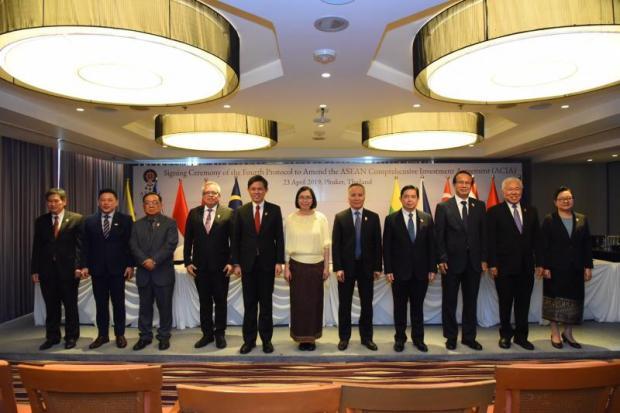 ASEAN economic ministers ink two agreements to deepen regional economic integration
(23 April 2019) The 25th ASEAN Economic Ministers’ (AEM) Retreat held in Phuket, Thailand on April 22 to 23 culminated with the inking of two vital agreements to further integrate services and investments in ASEAN. The two agreements were (i) the ASEAN Trade in Services Agreement (ATISA) which builds on the existing framework agreement on services and provides a mandate for member states to move towards a “negative list approach”, where all service sectors are considered liberalised by default, and (ii) the Fourth Protocol to Amend the ASEAN Comprehensive Investment Agreement (ACIA), which builds on the existing ACIA by adding investor protection provisions, such as provisions to prevent governments from imposing performance requirements on investors and compensation for parties affected when a government modifies its commitments. The AEM Retreat concluded with the endorsement of the 13 priority economic deliverables set forth by this year’s ASEAN Chair, as well as a commitment to strive to conclude negotiations on the 16-country Regional Comprehensive Economic Partnership (RCEP) by November 2019.

Growth in Southeast Asian economies expected to moderate as global headwinds persist
(24 April 2019) The World Bank’s latest edition of its East Asia and the Pacific (EAP) Economic Update published on April 24 projects growth in the EAP to soften to 6% in 2019 and 2020, down from 6.3% in 2018 — largely due to global uncertainties and a slowing Chinese economy. As for ASEAN, the World Bank’s 2019 growth projections for Indonesia (5.2%) and Malaysia (4.7%) remains unchanged, while growth rates in Thailand (3.8%), Vietnam (6.6%) and the Philippines (6.4%) are also expected to slow this year. Furthermore, the World Bank projects growth in smaller economies such as Cambodia (7%), Laos (6.6%), and Myanmar (6.5%) to remain robust in 2019, albeit at a slower pace than in 2018.

Southeast Asia beginning to displace traditional investment destinations
(24 April 2019) Southeast Asia is slowly beginning to displace conventionally-favoured investment destinations such as Europe, Britain and the US, according to a Baker McKenzie survey of 600 executives in Asia Pacific. According to the firm’s M&A partner Bee Chun Boo, this is because Southeast Asia is seen as a hotspot for Belt and Road Initiative (BRI) investments, with great potential for development in the infrastructure, power, manufacturing, financial services and e-commerce industries. Furthermore, the report found that Chinese investors also favoured Southeast Asia as it is perceived to offer solid economic growth rates, a substantial market size and a degree of cultural rapport for Chinese companies that they may not enjoy in Western markets. Having said that, Chinese companies will need to step up their trust-building efforts in the region as a recent study by the Brunswick Group found that Japanese, German, British and American firms were perceived more favourably throughout Southeast Asia.

Indonesia seeks spending boost as it targets growth of 5.3% – 5.5% for 2020
(23 April 2019) Indonesian President Joko Widodo chaired his second cabinet meeting in two days on April 23 as he looks set to win a second five-year term based on unofficial quick counts which showed him ahead of presidential contender Prabowo Subianto by almost 10 percentage points. While official results will only be released by May 22, incumbent Joko went ahead with laying out the country’s 2020 budget targets during the cabinet, and called on his cabinet to “formulate a clear and measurable roadmap.” According to Bloomberg, Joko’s 2020 budget targets sees economic growth at 5.3%-5.5%, inflation at 2%-4%, consumption growth at 5.2%, investment growth at 7.5%, exports growth at 7%, imports growth at 6%, and crude oil price at US$60-70 per barrel. The president also emphasised the need for increased investment and exports to support growth as the country continues to navigate the effects of the US-China trade tensions.

Trade laws protecting local producers being drafted
(23 April 2019) Myanmar’s commerce minister U Than Myint announced on April 23 that the ministry is drafting new trade laws to protect local producers and promote local goods. These laws, he said, will include a new Safeguard Law on Increased Import and Antidumping, as well as a Countervailing Law. Furthermore, the government has added new priority sectors to its National Export Strategy (NES) 2020-2025. The new priority sectors are the digital economy, gems and jewellery, fruits and vegetables, agricultural product-based food products and industrial art products. According to International Trade Centre head Arancha Gonzalez, the new priority sectors will indeed help Myanmar fulfill its potential as a value-add exporter of goods. She added that Myanmar’s exports must improve in three key areas, i.e., value-addition, expertise and innovation. In the first six months of financial year 2018-19, export earnings totalled US$8 billion, up from US$650 million from the same period last year.

Cambodia looks to ASEAN members for support in EU tariff dispute
(24 April 2019) Cambodian commerce minister Pan Sorasak put forward a formal request asking fellow ASEAN member states to issue a joint statement to the European Union objecting to the bloc’s decision to impose safeguard measures against Cambodian rice imports. In January, the EU imposed tariffs on Cambodian and Burmese rice to stem the rising imports of rice from these countries. Further, the minister also urged each country’s permanent missions to the World Trade Organization (WTO) to issue statements to support Cambodia’s declaration. These requests were made during the ASEAN Business Advisory Council Consultation meeting held in Thailand on April 22. According to the Cambodian Ministry of Commerce, the ASEAN economic ministers in attendance agreed to the requests. Meanwhile, the World Bank announced on April 24 that Cambodia’s economy grew by 7.5% last year — its highest in four years. However, the World Bank also predicts slowing economic growth for the country in the coming three years due to greater uncertainty over Cambodia’s trade privileges under the EU’s Everything But Arms (EBA) scheme.

Drastic measures needed to lift EU yellow card on Vietnamese fisheries
(24 April 2019) Vietnam’s agriculture and rural development minister Nguyen Xuan Cuong said that the government needs to make drastic changes in its fisheries sector if it wants the EU to lift the ‘yellow card’ warning that was imposed in October 2017 due to reports of rampant illegal, unreported, and unregulated (IUU) fishing in the country. Otherwise, he said, the country is also at risk of receiving a ‘red card’ warning when the EU’s Directorate for Maritime Affairs and Fisheries conducts its final check in late May. This would lead to a complete ban on Vietnamese fisheries exports to European markets. According to the minister, the country has yet to fulfill four of the EU’s recommendations, including one to put a stop to illegal fishing by Vietnamese vessels in other countries’ territories. As such, he urged Prime Minister Nguyen Xuan Phuc to approve the establishment of a National Steering Committee to regulate IUU fishing as soon as possible.

Thailand to seek greater access to the UK market after Brexit
(23 April 2019) Thailand is keeping a close eye on trade opportunities resulting from the UK’s departure from the EU as the country hopes for an amendment to the tariff quota on Thai exports to boost its access to this key market, said Thai Department of Trade Negotiations (DTN) head Auramon Supthaweethum. According to Supthaweethum, uncertainties surrounding the Brexit process has so far led to the weakening of the British pound, which subsequently made Thai exports to the UK less competitive. However, she said, Brexit could turn out to be beneficial to Thailand in the long run. For instance, the UK announced that it would stop imposing anti-dumping taxes on certain Thai exports, i.e., sweet corn, fireglass, hand pallet trucks and steel pipe joints. The Commerce Ministry is also in negotiations with the UK and the EU to amend the tax quota for Thai goods entering their markets after Brexit. The quota currently affects exports such as rice, canned fish and cassava. The UK is Thailand’s 20th largest trading partner, with a total trade value of US$7 billion in 2018.

Malaysia and Turkey consider expanding existing free trade agreement
(24 April 2019) Turkey and Malaysia are currently reviewing the countries’ existing bilateral free trade agreement (FTA), said Turkish ambassador to Malaysia Dr Merve Safa Kavakci during an interview with Malaysian national news agency Bernama. The FTA is Turkey’s first with an ASEAN country and has doubled the trade volume between the two countries to US$3.14 billion in 2017. According to the ambassador, the countries are looking to expand the FTA’s scope to reduce the existing bilateral trade imbalance and align the FTA with the policies of Malaysia’s new government. She added that Turkey sees great potential for cooperation in defence, pharmaceuticals, high-technology products, and food and beverages. Furthermore, she revealed that Turkey hopes to revitalise the Ankara-Kuala Lumpur and Istanbul-Johor Bahru sister-city relationships through concrete projects soon.

Cash still reigns supreme in ASEAN transactions
(25 April 2019) A study on digital payments and card usage for transactions in ASEAN by Standard Chartered found that card penetration in the region remains under 50%, while cash is still used in 70% of transactions in countries such as Indonesia and the Philippines. According to the report, the top reasons for the strong preference for cash were a low awareness of how digital payments work, privacy concerns over financial records, reluctance by small and medium businesses (SMEs) to bear digital payment transaction costs, as well as the perception that cash remains the simplest payment option. The study also found cheques to be a relatively popular option in Thailand and the Philippines. However, the report noted Bank Indonesia’s efforts to introduce a direct debit feature in 2016, and cheque usage in the country falling by 32% between 2014 to 2019. The report also noted Singapore’s target to eliminate the use of cheques by 2025 and Malaysia’s goal of reducing its cheque volume to 100 million per year by 2020.