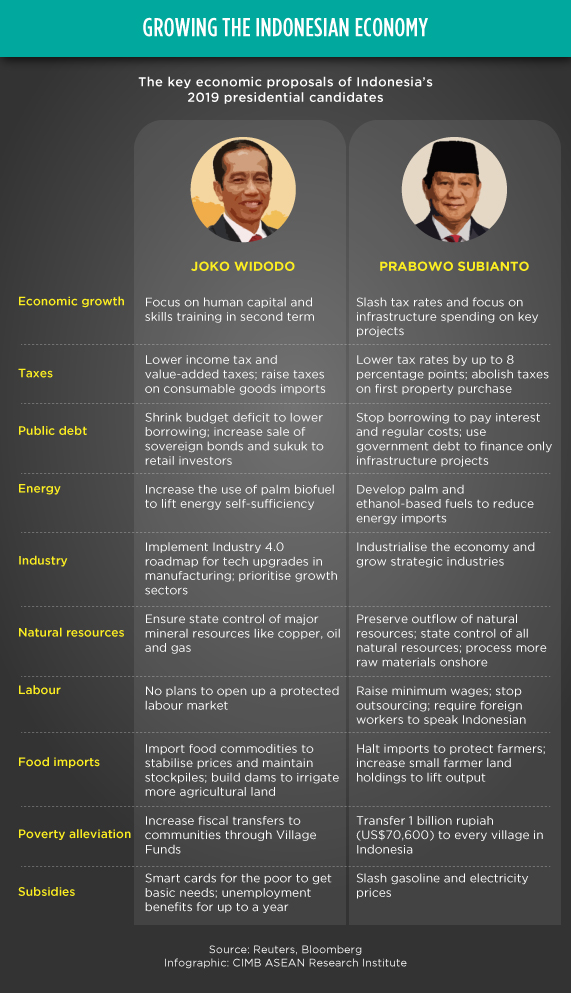 The economic challenges facing Indonesia’s election winner
(15 April 2019) 193 million Indonesian citizens voted during the country’s national elections on April 17, making it the world’s largest one-day election. While preliminary results point to a second term for incumbent presidential candidate Joko Widodo, the final official results will only be announced between April 28 and May 22, with the inauguration ceremony to be held on October 20. Prior to the elections, the Indonesian public were treated to a series of televised debates between presidential candidates Joko Widodo and Prabowo Subianto, where both contenders touted their many plans to grow the economy, create jobs and spur domestic industries. However, analysts say that regardless of who wins the elections, the eventual winner will inevitably face significant challenges in steering Southeast Asia’s biggest economy as he will be doing so against a backdrop of slowing global economic growth, unresolved US-China trade tensions and volatile oil prices. Indonesia’s GDP grew by 5.17% in 2018, lower than the 7% growth promised by Jokowi during his first term. Furthermore, the country’s current account deficit of almost 3% of GDP makes it vulnerable to external risks and dependent on foreign capital. Closer to the ground, issues such as unemployment, underemployment and cost of living continue to persist.

Indonesia looks for ways to boost palm oil use as it sees lower exports to Europe
(15 April 2019) The Indonesian agriculture ministry commenced on April 14 a trial period for the use of a 100% biodiesel or “B100” fuel made of fatty acid methyl ester from crude palm oil (CPO) as the country looks for ways to expand the domestic palm oil market and reduce dependency on conventional fuels. The announcement was made by agriculture minister Amran Sulaiman, who said that the trial will be conducted by fueling 50 of the ministry’s cars and tractors with B100 fuel. The move comes in addition to the government’s push for widespread domestic use of 20% and 30% blended biodiesel — known as B20 and B30 fuel respectively — to combat the drop in exports of CPO to Europe due to the European Union’s proposed phasing out of palm oil in biodiesel. According to Statistics Indonesia (BPS), CPO exports in March to the Netherlands dropped by 39%, while exports to the UK dropped by 22%. Exports to Germany, Italy, Spain and Russia also declined. Meanwhile, an Indonesian delegation led by coordinating economic minister Darmin Nasution is in Brussels to discuss the matter with EU representatives.

Malaysian palm oil industry hopes to tap the domestic aviation fuel market
(16 April 2019) The Malaysian Palm Oil Board (MPOB) is pushing for the use of palm oil fuel in the aviation industry to expand the commodity’s domestic market as it faces the threat of palm oil restrictions in the EU. According to MPOB head Dr Ahmad Kushairi Din, this can be done by blending palm oil fuel with conventional fossil fuels to produce aviation fuel. He added that a study has been done in the US where palm fatty acid distillate (PFAD) and palm oil were found to be viable feedstock for sustainable aviation fuel. As such, he hopes that the government will lobby for the acceptance of palm oil as biojet fuel blend at the International Civil Aviation Organization (ICAO), as well as consider domestically producing biojet fuel to meet the demands of the 80 airlines currently operating to and from Malaysian airports. Meanwhile, the Ministry of Trade and Industry said that negotiations for the proposed Malaysia-EU FTA will resume when the EU returns to a balanced and fair treatment of the country’s palm oil. This is crucial as the EU is Malaysia’s largest market for palm oil exports with the top destinations being the Netherlands (50%), Spain (17%) and Italy (12%) in 2018.

Malaysia to prioritise improving existing railway systems over rail link with Singapore
(17 April 2019) Malaysia will improve its existing railway system before revisiting plans to build the Malaysia-Singapore high-speed rail (HSR) service in two years, said Prime Minister Mahathir Mohamad at a dialogue with the Malaysian Rail Industry Corporation (MARIC) on April 16. According to Mahathir, the HSR is not a priority as it only reduces the travel time by around 30 minutes. He added that the rail link would be more attractive if it was able to help commuters save two to six hours. As such, the government is also considering a high-speed rail project connecting the peninsula’s southern Johor state to the northern Penang state or even up to the border with Thailand. Malaysia’s current major rail projects include the Gemas-Johor Bahru Electrified Double-Track Project (EDTP) that will be completed in 2021, as well as the recently-revived East Coast Rail Link (ECRL) double-track network that will link Port Klang in Selangor to Kota Bharu in Kelantan through five states.

Malaysia and Indonesia share top spot in global Muslim travel index
(15 April 2019) Malaysia and Indonesia share the top spot as the leading Muslim-friendly travel destination among Islamic countries in this year’s MasterCard-CrescentRating Global Muslim Travel Index (GMTI) 2019 published on April 10. Other ASEAN nations also fared well in the rankings, with Singapore, Thailand and the Philippines placing in the top 10 among non-Islamic countries. The rankings were calculated based on criteria in four key areas, i.e., access, communications, environment and services. According to the CrescentRating report, an estimated 140 million Muslims traveled in 2018, up nine million from the previous year. The report also estimates that this number will reach 230 million and contribute some US$300 billion to the global economy by 2026.

The Philippines to up its game in Halal trade, tourism and banking
(12 April 2019) The Philippines’ Department of Trade and Industry (DTI) aims to grow its revenue from halal exports by 6-8% this year by increasing the volume of local halal-certified products. In 2018, revenue from halal exports reached US$560 million, while the target growth for 2019 translates to between US$594 million to US$605 million. According to trade promotions undersecretary Abdulgani Macatoman, the government hopes that at least 100 small and medium enterprises (SMEs) will receive halal certifications every year in order to boost the country’s participation in the US$3.2 billion halal market. The DTI intends to work towards this target through continuous promotion of halal certification for food products and tourism facilities, as well as through the rolling out of the Philippine National Halal Certification Scheme and Accreditation Guidelines in August this year. Furthermore, the undersecretary noted that at least six Islamic banks from Malaysia and the Middle East have expressed interest in setting up shop in the Philippines once the country’s Islamic Banking bill — now in its second reading in both Houses of Congress — becomes law.

UK assures the Philippines of continued access to GSP+ privileges after Brexit
(14 April 2019) The Philippines’ Department of Trade and Industry (DTI) published a statement saying that the British government has provided reassurance that the Philippines will be accorded similar trade privileges to those they currently enjoy under the European Union’s Generalized Scheme of Preferences Plus (EU GSP+) even after the UK leaves the EU. The reassurance comes as the possibility of a “no-deal Brexit” looms ever closer, leading to growing concerns over what effect this scenario would have on the UK’s trade partners. Under the present EU GSP+, some 6,274 Filipino products enjoy duty-free entry into the EU bloc. Nevertheless, the Philippines’ trade secretary Ramon Lopez also appears unfazed by the possibility, as he was quoted by Philstar as saying that any post-Brexit scenario would not have a significant impact on the country. Meanwhile, the Philippines’ negotiations with the EU for a free trade agreement has reportedly taken a back seat due to evaluations of the Philippines’ commitments under the existing GSP+ framework. According to a DTI representative, the issues under consideration include the utilisation rate of GSP+ privileges, as well as non-tariff factors such as competitiveness, supply capacity and importers’ sentiment.

Cambodia takes EU to court over rice import tariffs
(12 April 2019) Cambodia has filed a lawsuit at the European Court of Justice to challenge the EU’s imposition of duties on the country’s rice exports. The lawsuit was made in response to the European Commission’s decision in January to impose duties on Indica rice from Cambodia and Myanmar in order to safeguard the market share of EU rice producers. According to a Commission report, Indica rice imports from the two countries rose by 89% in the past five seasons, leading EU producers’ European market share to fall from 61% to 29%. However, the Cambodian Ministry of Commerce claims that the 89% figure was calculated based on flawed information and called the EU’s decision a “weapon to kill Cambodian farmers.” The Cambodian Rice Federation also protested the safeguard measure, saying that it was uncalled for as the rise in rice imports to Europe were not a consequence of dishonourable conduct on the Cambodian side.

ASEAN and Mexico to boost cooperative ties
(14 April 2019) Mexico is a key market for ASEAN in Latin America (LATAM) and a gateway to elevate ties between the Southeast Asian bloc with countries in the LATAM region, said the chairman of the ASEAN Committee in Mexico (ACMC) and Vietnamese ambassador to Mexico Nguyen Hoai Duong. The chairman’s remarks were made at a business cooperation forum organised by the ACMC and the Western Mexican Business Council for Foreign Trade (COMCE Occidente) on April 11 and 12 in Mexico’s Jalisco state. The event sought to foster greater relations between Mexico and ASEAN countries, especially in trade, investment, education and tourism. According to the chairman, Mexico is Vietnam’s third largest trade partner in LATAM and Vietnam is Mexico’s eighth largest trade partner in Asia, with bilateral trade between the countries reaching almost US$5 billion in 2018. Furthermore, figures from the Mexican government show that trade between the country and Indonesia, Malaysia, Thailand, Vietnam and the Philippines saw a year-on-year increase of 10% reaching US$25.51 billion in the first 11 months of 2018.