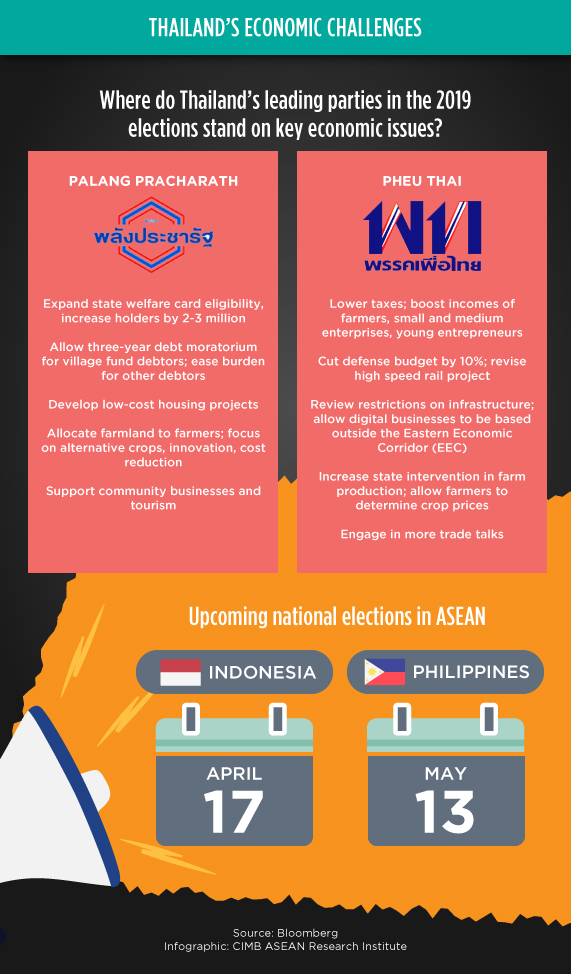 Thailand’s economic challenges expected to persist regardless of election outcome
(27 March 2019) While the preliminary results of Thailand’s national elections released on March 26 may have yielded more questions than answers, there is no doubt that tackling the country’s many economic challenges will be the incoming administration’s top priority — regardless of which party wins the election. According to analysts interviewed by Reuters and Bloomberg, the new administration will first need to move quickly to outline its economic policies in order to maintain economic stability. Secondly, continuity must be seen in key infrastructure commitments such as the Eastern Economic Corridor (EEC) as well as in areas outside key economic hubs in order to maintain investment momentum (Thailand currently lags behind regional peers in terms of investment as a share of GDP). Thirdly, there needs to be greater investment in improving the quality of education and healthcare to improve the Thai people’s quality of life. By addressing these challenges, the government would not only help breathe life into the US$515 billion economy but also encourage greater investments in the country. Thailand’s economic growth in 2018 was the strongest in six years at 4.1% but still lagged behind the Philippines (6.2%), Indonesia (5.2%) and Malaysia (4.7%).

Vietnam and Brunei upgrade bilateral ties to a comprehensive partnership
(27 March 2019) The Sultan of Brunei Hassanal Bolkiah’s official visit to Vietnam from March 26-28 culminated in agreements between both parties to elevate bilateral relations to a comprehensive partnership. Furthermore, both sides agreed to aim for US$500 million in bilateral trade by 2025 — up from the US$54 million recorded in 2018. Fortunately, trade between the countries in the first two months of 2019 alone reached US$43 million. Brunei currently has 179 investments in Vietnam with a combined value of over US$1 billion, while Vietnam has two investments in Brunei worth US$3.6 million.

Ho Chi Minh City and Singapore to cooperate on smart city development and digital innovation
(25 March 2019) Singaporean Deputy Prime Minister Teo Chee Hean’s official visit to Vietnam concluded with both sides agreeing to intensify economic cooperation between the countries, according to Vietnam Plus. Most notably, Teo’s visit to Ho Chi Minh City (HCMC) yielded agreements to cooperate on smart city development and digital innovation to help advance HCMC’s plans to develop an Innovation District. According to HCMC party secretary Nguyen Thien Nhan, the city is particularly keen to learn from Singapore’s experience in the development of green cities, urban lighting systems and tourism. Singapore is HCMC’s top foreign investor by end-2018 with investments in over 1,100 projects worth more than US$10 billion. Trade between Singapore and HCMC reached US$3.7 billion in 2018.

Indonesia and Thailand see decreased dependence on the US dollar for bilateral trade
(25 March 2019) The local currency settlement (LCS) framework for bilateral trade between Indonesia and Thailand is bearing fruit, as evidenced in the fourfold year-on-year increase in the value of transactions made using local currencies in the first two months of 2019. Transactions in the first two months of this year totalled US$8.5 million. According to Bank Indonesia, the LCS was introduced in December 2017 to boost trade between the countries while reducing their dependence on third-party currencies such as the US dollar. In the two months following the launch, the two countries recorded approximately US$2.1 million in LCS transactions. Figures from the Indonesian trade ministry puts bilateral trade between the two countries at US$17.71 billion in 2018.

Indonesia, Malaysia await the European Parliament’s decision on palm oil ban
(25 March 2019) Indonesia and Malaysia continue to make preparations to formally protest against the European Union’s (EU) proposal to impose a cap on palm-oil based biofuels. Last week, Indonesia’s trade ministry said that it was reviewing ongoing negotiations of the Indonesia-European Union Comprehensive Economic Partnership Agreement (IEU-CEPA) and that the parties were struggling to advance discussions on the “trade and sustainable development” chapter. In response, the EU ambassador to Indonesia Vincent Guerend said that the bloc was prepared to help Indonesia’s palm oil products meet the required sustainability standards, and that the directive could still be revised in 2021 or 2023. According to an Indonesian Foreign Ministry representative, the European Parliament adjourned on March 25 and the current session could produce three possible outcomes: (i) it produces a decision on whether to proceed with the directive, (ii) it delays the decision to April 15, or (iii) it awaits the election of a new parliament.

Pakistan sees Malaysia as entry point to other ASEAN markets
(25 March 2019) Malaysian Prime Minister Mahathir Mohamad’s three-day visit to Pakistan upon the invitation of Prime Minister Imran Khan concluded with the inking of five memoranda of understanding for investments worth around US$900 million and agreements to intensify cooperation between the two countries, according to The Diplomat. Most notably, Malaysian carmaker Proton agreed to establish a power plant near Karachi — its first in South Asia. Furthermore, Malaysia reiterated its interest in purchasing fighter jets from Pakistan and held discussions with Pakistan International Airlines on extending flight operations between the countries. In turn, Pakistan expressed its interest in not only doing business with Malaysia, but also using the country as an entry point to other ASEAN and East Asian markets. Both sides also agreed to convene the next Malaysia-Pakistan Closer Economic Partnership Agreement (MPCEPA) joint committee meeting at the soonest.

The Philippines and UK sign joint economic action plan
(23 March 2019) The Philippines and United Kingdom (UK) inked a Statement of Partnership and Joint Action Plan on economic cooperation, trade and investment on March 21 ahead of the UK’s exit from the European Union (EU), according to Manila Bulletin. The signing also marks the first Economic Dialogue held between the two parties, led by the Philippines’ Department of Trade and Industry (DTI) undersecretary Ceferino Rodolfo and British ambassador Daniel Pruce. Under the agreement, both sides agree to enhance current and future economic cooperation across a wide range of sectors in order to boost the current bilateral trade volume which was valued at US$987.4 million in 2017. Back home in the Philippines, trade secretary Ramon M. Lopez told BusinessWorld that the country could very well begin negotiations for a bilateral free trade agreement with the US later this year.

Vietnam urges Germany to increase investment in infrastructure, energy, and education
(25 March 2019) Vietnamese Prime Minister Nguyen Xuan Phuc urged Germany to increase its investment in the country, especially in the development of infrastructure, energy and education, according to Nhan Dan Online. The premier’s remarks were made during a reception hosted for German economic affairs and energy minister Peter Altmaier in Hanoi on March 25. Furthermore, Phuc expressed his hope that the European Union-Vietnam Free Trade Agreement (EVFTA) will come to fruition. In turn, Altmaier said that Germany is particularly interested in developing artificial intelligence, digitalisation and startups in Vietnam. According to Vietnam Plus, German minister president of Thuringia state Bodo Ramelow is expected to lead a large delegation including representatives of 70 businesses to Vietnam in mid-April. Germany is currently Vietnam’s largest EU trade partner.

The Philippines issues guidelines on e-COs to expedite trade with ASEAN countries
(25 March 2019) The Philippines Bureau of Customs (BOC) published new guidelines on the application, submission and processing of electronic Certificates of Origins (e-CO) through the country’s single window portal TradeNet. According to BOC customs commissioner Ray Leonardo Geurrero, the new system will help the country keep up with new global trade rules and trends by serving as the nerve centre of the government’s digital trade data. Furthermore, the new framework was developed in accordance with the ASEAN Single Window and amended ASEAN Trade in Goods Agreement (ATIGA) procedures to help boost the flow of trade between the Philippines and its ASEAN neighbours. TradeNet will go live for a trial phase at the Port of Manila, Manila International Container Port and the Port of NAIA. Separately, trade secretary Ramon M. Lopez announced that a joint administrative order will be issued in the coming weeks to address port congestion and regulate high shipping fees at the country’s ports.

ASEAN still very much dependent on conventional energy sources
(26 March 2019) The energy transition readiness of the ASEAN-6 countries (Indonesia, Malaysia, the Philippines, Singapore, Thailand, Vietnam) were ranked in the World Economic Forum’s Energy Transition Index (ETI) based on evaluations of the countries’ present energy ecosystem as well as their future readiness to adapt to future energy needs. The Index ranks 115 economies on how well they are able to balance energy security and access with environmental sustainability and affordability. Unsurprisingly, Singapore was came in at the top of the ASEAN-6 class backed by a strong governance and a culture of innovation and modern infrastructure which enables energy transition. On the other hand, Indonesia landed in sixth place amongst the ASEAN-6 due to its high solid fuel use and the presence of energy subsidies. Furthermore, the report found that all six countries remained generally dependent on conventional energy sources and the use of renewable energy remained relatively low when benchmarked against global standards. Nevertheless, a recent study by the ASEAN-German Energy Programme found that renewable energy sources in Southeast Asia especially solar power had the potential to be just as — if not more —cost competitive than conventional power sources in the next few years.