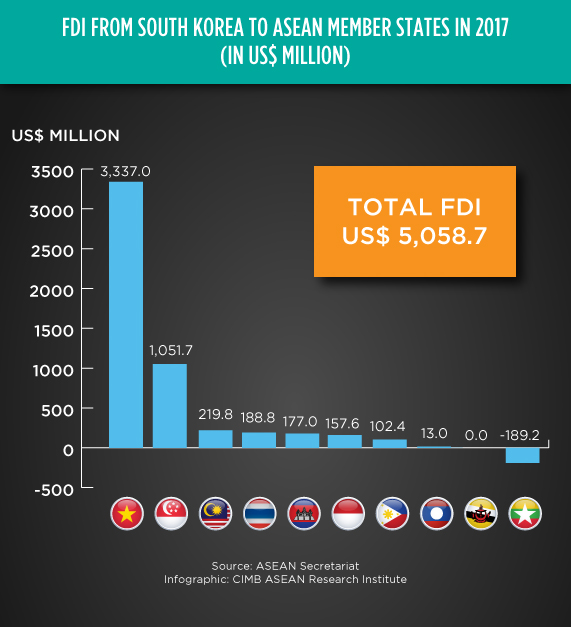 Cambodia and South Korea agree to enhance bilateral cooperation
(18 March 2019) South Korean President Moon Jae-in’s state visit to Cambodia from March 14 to 16 concluded with the inking of seven agreements between the parties to increase bilateral cooperation in several areas, according to a statement by the Cambodian Ministry of Foreign Affairs and International Cooperation. This included agreements on double taxation prevention, increased market access for Cambodian goods into South Korea, loan agreements and frameworks, as well as memoranda of understanding on various areas of cooperation. According to data from the Korean Export-Import Bank, the country’s investments in Cambodia are primarily in real estate (29%), banking and finance (21%), construction (18%), manufacturing (15%), and agriculture (4%). Bilateral trade between the countries saw an 11% increase last year, reaching US$975 million.

The Philippines secures US$1.24 billion in investment pledges from Japan
(18 March 2019) Japanese companies committed to US$1.24 billion in new investments in the Philippines during a bilateral business meeting held in Tokyo recently, according to the Philippines’ Department of Trade and Industry (DTI). The new investments will include a US$76 million affordable housing joint venture, US$19.2 million waste-to-energy project, US$250 million large-scale integrated poultry farm, and US$46 million automotive system manufacturing facility. Together, these investments are expected to create 16,000 domestic jobs. The bilateral business meeting comes as the Philippines government looks to pass the Trabaho tax reform bill, which seeks to lower corporate income tax from 30% to 20% by 2029.

Singapore and US ink agreement to promote infrastructure development in Asia
(21 March 2019) Singapore’s Infrastructure Asia and the US’s Overseas Private Investment Corporation (OPIC) signed a Memorandum of Understanding to promote and facilitate infrastructure investments in Asia, during trade and industry minister Chan Chun Sing’s working visit to Washington DC on March 20. According to a statement from the Ministry of Trade and Industry, the agreement encompasses information sharing, deal facilitation, structuring and capacity building schemes in areas of mutual interest. Under the agreement, Investor Asia will connect investors with infrastructure development projects, while OPIC will assist US companies looking to expand their presence in emerging markets. Speaking at an event in Washington DC, Chan also said that whether or not the Regional Comprehensive Economic Partnership (RCEP) negotiations can be concluded this year depends on the outcomes of upcoming national elections in Australia, India, Indonesia and Thailand — who together — form a quarter of the pact’s 16 members. These elections will be held from March to May.

Ireland looks to strengthen Asian footprint with Brexit looming
(20 March 2019) Irish business, enterprise and innovation minister Heather Humphreys’s trade mission to Singapore concluded with both parties agreeing on possible areas for further collaboration and commitments from four Irish companies to set up new offices in Singapore, according to The Straits Times. The mission comes under Enterprise Ireland’s “Global Ireland 2025” and post-Brexit strategy, which aims to boost Ireland’s exports to markets beyond Britain by 50% by 2020. This strategy will include the establishment of Enterprise Ireland representative offices in Melbourne and Ho Chi Minh City, in addition to current offices in Singapore and Sydney.

Filipino rice merchants to shun Sabah and Labuan in future transhipment trades
(15 March 2019) Rice buyers from the Philippines expressed their disappointment over a Labuan court decision to classify 351,000 bags of Vietnamese rice exports en route to the Philippines as smuggled goods, according to Free Malaysia Today (FMT). Subsequently, the rice buyers announced a boycott of Sabah and Labuan ports in favour of Tarakan Port in North Kalimantan — a move that FMT says could cost the state almost US$500 million. In response, Labuan Indian Chamber of Commerce and Industry chairman Dahlif Singh said that the incident was most unfortunate, especially when transhipment trade had given the duty-free island a much needed boost after the slump in the oil and gas sector. He also attributed the issue to excessive red tape, failure to enhance Labuan Port’s infrastructure over the years, as well as a delay in the preparation of transhipment guidelines.

Malaysia and Indonesia warn of retaliation if the EU greenlights palm oil restrictions
(18 March 2019) Malaysia will consider retaliatory measures against European exports if it proceeds with its ban on the use of palm oil in biofuels, said Malaysian primary industries minister Teresa Kok in a statement denouncing the European Union’s (EU) recent decision to classify palm oil as a “high risk” agriculture commodity. Kok’s statement follows Malaysian Prime Minister Mahathir Mohamad’s letter to French President Emmanuel Macron, where he said that such a move by the European bloc would lead to the possible suspension of EU-Malaysia free trade negotiations and the “imposition of like-minded legislation against French exports.” Similarly, Indonesian coordinating economic minister Darmin Nasution confirmed that the government will lodge a formal protest with the World Trade Organization. Indonesia will also consider restricting EU market access if the bloc ratifies the proposal.

Thailand hopes to restore WTO multilateral system
(19 March 2019) Thailand will push for the restoration of the World Trade Organization’s (WTO) multilateral dispute settlement system and other reforms during a high-level ASEAN meeting in Vientiane in early April, said the head of its Trade Negotiations Department Auramon Supthaweethum. According to Supthaweethum, the WTO’s appellate adjudication body has not been able to operate at full capacity for over a year as it has not been able to fulfill quorum requirements. Furthermore, the group has yet to fill six of the seven seats that will be vacated when current member terms expire at the end of the year, failing which the WTO will be unable to fulfill its essential duty as an adjudication body. Separately, Supthaweethum also announced that Thailand will delay its application to join the Comprehensive and Progressive Agreement for Trans-Pacific Partnership (CPTPP) until after the country’s general elections on March 24.

ASEAN advances roadmaps for sustainable capital markets and fuel efficiency
(19 March 2019) The ASEAN Capital Markets Forum (ACMF) endorsed the Roadmap on ASEAN Sustainable Capital Markets on March 18 aimed at promoting sustainable investment classes in the region in line with Thailand’s “Advancing Partnership for Sustainability” chairmanship theme, according to a statement by Securities Commission (SC) Malaysia. Clauses under the roadmap that will be passed on to the ASEAN Finance Ministers’ Meeting for acknowledgement in April include measures to expand investor participation in ASEAN capital market products that contribute to greater regional connectivity and sustainability, as well as mechanisms to allow cross-border professional services and investment offerings. Meanwhile, the ASEAN Secretariat published a seven-year roadmap outlining new light duty vehicle (LDV) fuel efficiency targets across the region, setting an “aspirational” stretch target to reduce fuel consumption per 100 kilometers by 26% from 7.20 LGe/100km in 2015 to 5.3 LGe/100km by 2025.

Grab and AirAsia launch new digital financial services
(19 March 2019) Southeast Asian ride-hailing giant Grab announced on March 19 that it is expanding beyond its core service to provide financial services aimed at small and medium enterprises across the region. This includes expanding accessibility for its digital payment system GrabPay, credit services that will allow users to pay their monthly accumulated expenses on the app in one go or in instalments, an online insurance marketplace in partnership with China’s Zhong An, as well as loan offerings in partnership with Japan’s Credit Saison. The company’s slew of financial products comes in addition to existing services integrated on the Grab application such as Happy Fresh grocery deliveries, Hooq video streaming and China’s Ping An health services. Grab’s announcements were made at the Money 20/20 conference in Singapore, where AirAsia head Tony Fernandes also launched the airlines’ e-money application BigPay. Fernandes was quoted saying that the service aims to make traveling easier by reducing remittance charges and allowing users to enjoy real currency exchange rates at no additional cost.