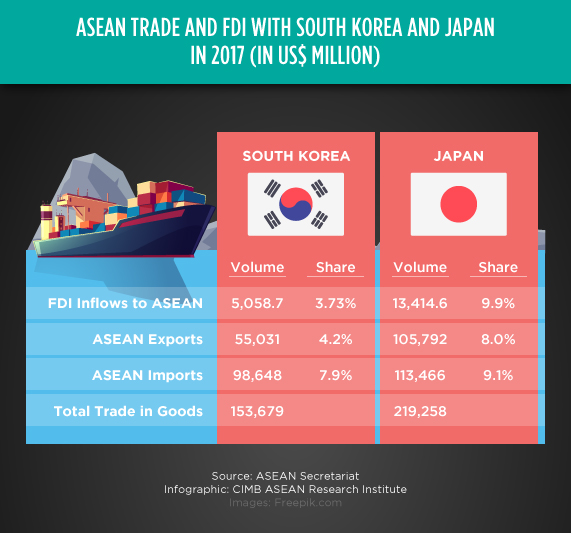 South Korean President Moon Jae-in kicks off three-nation ASEAN tour in Brunei
(12 March 2019) South Korean President Moon Jae-in’s official visit to Brunei concluded with the inking of three memoranda of understanding (MOU) and commitment from both parties to continue elevating cooperation between the countries. According to a joint statement issued by President Moon and Brunei’s Sultan Hassanal Bolkiah, the three MOUs include agreements to increase South Korea’s investment and business presence in Brunei, maintain infrastructure development cooperation, explore collaboration in the oil and gas sector, re-establish cooperation in the liquefied natural gas value chain, conduct joint capacity building in renewable energy, cooperate on intellectual property rights, and work together to tackle issues related to the Fourth Industrial Revolution. Speaking on behalf of the South Korean delegation, foreign minister Kang Kyung-wha said that Brunei was the republic’s first stop as Brunei is the ASEAN-Korea dialogue coordinator from 2018 to 2021. Both countries are also looking forward to co-chairing the meeting on renewable energy during the East Asia Summit. Brunei is also the country coordinator for the ASEAN-Korea commemorative summit that will be held later this year.

Malaysia and South Korea aim to sign a bilateral FTA by year’s end
(14 March 2019) South Korean President Moon Jae-in and Malaysian Prime Minister Mahathir Mohamad’s meeting in Putrajaya on March 13 culminated in the signing of four memoranda of understanding (MOU) and commitment from both sides to sign a bilateral free trade agreement (FTA) by the end of 2019. Bilateral trade between both countries increased from US$15.76 billion in 2017 to US$17.98 billion in 2018. According to a press release from President Moon’s office, the leaders aim to sign the FTA on the sidelines of the South Korea-ASEAN summit later this year. Further, the four MOUs signed encompassed collaborations in transportation, industrial cooperation, halal food, as well as the development of a “smart city” in Malaysia. For instance, Malaysia will help South Korea comply with halal food requirements in order to attract more Muslim travellers, while South Korea will help train Malaysian students in the fields of engineering, information technology and new technologies. Both sides also expressed their wish to revitalise Malaysia’s Look East Policy and advance South Korea’s New Southern Policy as a means to deepen bilateral cooperation between the two countries.

Malaysia’s Samurai bond oversubscribed
(13 March 2019) The Malaysian government declared the issuance of its ¥200 billion (RM7.34 billion, US$1.79 billion) Samurai bond a success, with an oversubscription of over 1.6 times at ¥324.7 billion (RM11.94 billion, US$2.92 billion). According to Malaysian finance minister Lim Guan Eng, the oversubscription is a clear indication of Japanese investor confidence in Malaysia’s economy. The issuance of the 10-year bond marks Malaysia’s return to the Japanese bond market after 30 years as the country looks for ways to restore its economy and fund infrastructure developments. The bond, guaranteed by the state-owned Japan Bank for International Cooperation (JBIC), has been priced at a full cost of 0.63% per annum. Meanwhile, the second Bilateral Coordinating Committee (BCC) meeting on the Look East Policy 2.0 concluded in Tokyo on March 8 with both Malaysia and Japan committing to the revitalisation of the Look East Policy and deepening bilateral cooperation.

Amended ASEAN-Japan agreement to be a boon for the Philippines
(11 March 2019) The upcoming amendment of the ASEAN-Japan Comprehensive Economic Partnership (AJCEP) Agreement will provide greater access for the Philippines’ services exports and movement of persons, according to its Department of Trade and Industry (DTI). For instance, Filipinos will be able to obtain short and long-term visas to do business in Japan. This will include visas of up to five years for professionals from selected fields and temporary visas for their dependents. Meanwhile, the Philippines Statistics Authority (PSA) reported that the country’s trade in goods rose 2.9% to reach US$14.3 billion in January 2019, fuelled by a rise in imports. However, the country’s exports saw a 1.7% drop due to lower demand in manufacturing and minerals.

Indonesia and Malaysia cry foul over new EU biofuel criteria
(14 March 2019) The European Commission announced on March 13 that it has adopted new criteria to regulate the use of palm oil in biofuels as part of its efforts to meet the EU’s renewable energy goals. Under the new set of criteria, palm oil is classified as “unsustainable” due to its reputation as a driver of deforestation. As the provider of up to 85% of the world’s palm oil supply, Malaysia and Indonesia see the move as a “discriminatory” and “scientifically flawed” measure that “makes no attempt to include broader environmental concerns” linked to other vegetable oils. As such, both countries will jointly challenge the bill through the World Trade Organization, in addition to delaying the elevation of ASEAN-EU relations from the status of dialogue partner to strategic partner until the issue is settled.

Brunei prioritises FDI growth and four focus areas to strengthen economy
(10 March 2019) Brunei will focus on boosting its economy by stimulating foreign direct investment (FDI) growth and intensifying activity in four key areas, said second finance and economic minister Hj Mohd Amin Liew. The four key areas are increasing local investments, facilitating ease of doing business, growing a skilled and employable talent pool, and maintaining public well-being. Also high on the government’s agenda is lowering the country’s unemployment rate, which stood at 9.3% or 19,200 individuals in 2017. Separately, Brunei’s Ministry of Finance and Economy (MoFE) tabled a US$814 million budget for its 2019/2020 fiscal year on March 13, which included a US$21 million allocation for the establishment of Brunei’s stock exchange. According to an online report, a timeline for the launch of the exchange has yet to be announced, although the Autoriti Monetari Brunei Darussalam (AMBD) previously stated that the exchange aims to eventually list equities, bonds and sukuk.

Indonesian economic minister says exports affected by US-China trade war
(12 March 2019) The ongoing US-China trade war has affected and will continue to affect Indonesia’s exports as both countries are Indonesia’s largest export destinations, said coordinating economic minister Darmin Nasution. He added that as long as both economies slow down, so will their imports from Indonesia. Nevertheless, the minister expects the country’s economy to grow by 5.3% this year. Similarly, a recent Reuters poll of analysts projected a continued decline in Indonesia’s exports, thus leading to its narrowest trade deficit in five months in February.

The Philippines lowers 2019 GDP growth forecast due to budget impasse
(13 March 2019) The Philippines’ GDP growth could fall to as low as 4.2% this year if the passing of its 2019 budget continues to be delayed, according to its socioeconomic planning secretary Ernesto Pernia. As such, the government announced on March 13 that it has trimmed the country’s GDP growth target for this year to 6-7% from 7-8%, raised its inflation target to 3-4% from 2-4%, and lowered its 2020 growth target to 6.5-7.5% from 7-8%. Speaking on the matter, finance secretary Carlos Dominguez said that aside from the budget impasse, other factors that were taken into account were the ongoing US-China trade war as well as the impact of natural disasters on agricultural output.

Singapore invites Japanese firms to establish their “Asian base” on the island country
(13 March 2019) Singapore senior minister of state for law Edwin Tong said Singapore is the ideal one-stop shop for Japanese companies to establish their regional base given the country’s diverse and highly skilled talent pool. Tong, who was in Japan for an official visit, added that Singapore was especially interested to work with Japan in three areas, i.e., serving as their Asian base, partnering in regional infrastructure projects, and leveraging Singapore’s reputation as a “trusted neutral forum” to settle disputes. The minister’s comment is seen as a precursor to the launch of a new United Nations treaty — the Singapore Convention on Mediation — that will be inked on August 7 and is expected to boost Singapore’s position as a dispute resolution hub.