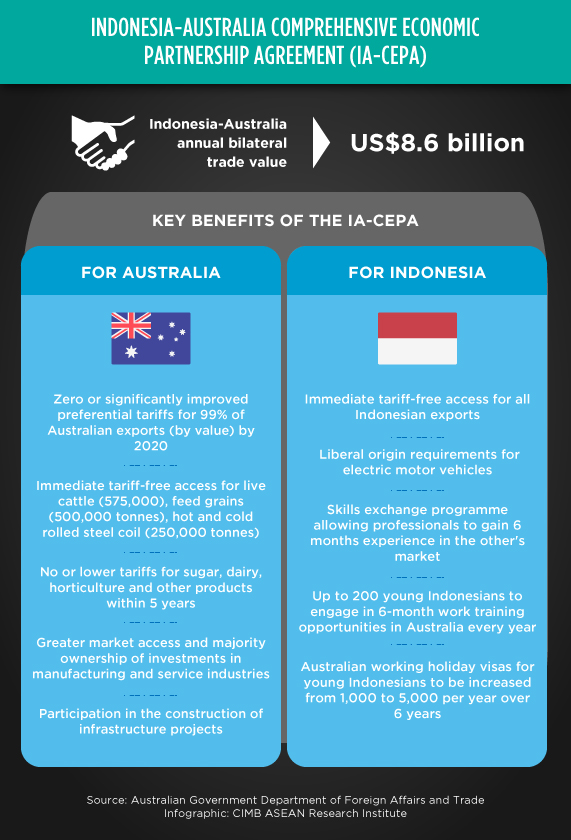 Economic partnership agreement to bolster trade and investment inked
(4 March 2019) Indonesian trade minister Enggartiasto Lukita and Australian trade minister Simon Birmingham signed the Indonesia-Australia Comprehensive Economic Partnership Agreement (IA-CEPA) in Jakarta on March 4 after over six years of negotiations, paving the way for greater economic cooperation between the two countries. Under the IA-CEPA, both countries will either eliminate or significantly lower duties for virtually all goods traded between them, while providing preferential treatment for investments in various sectors. For instance, the agreement grants Australian investors 67% foreign ownership in the education sector as well in restaurants and cafes, as well as 100% ownership of mid-to-high end hotels and resorts. Moving forward, both governments will work towards ratifying the agreement by year end. Statistics from the Indonesian government noted that the countries recorded US$8.6 billion in bilateral trade in 2018.

Australia’s wheat exports to gain from Myanmar’s first major grain terminal
(5 March 2019) The Australian wheat industry is set to benefit when Myanmar’s first major grain terminal — the International Bulk Terminal Thilawa (IBTT) located in Yangon — begins operations this year. According to the Australian Export Grain Innovation Centre (AEGIC), Australia exported 400,000 tonnes or US$117 million worth of wheat to Myanmar in 2017 and holds almost 90% of Myanmar’s wheat market. As such, a new terminal will likely lower wheat freight rates and boost Myanmar’s exports of Australian produce to markets in South Asia. Meanwhile, a recent survey by the Australia-Myanmar Chamber of Commerce found that government bureaucracy, access to skilled labour and weak law enforcement were the three top constraints faced by Australian businesses when doing business in Myanmar.

Malaysia’s trade grew 2.1% year-on-year reaching US$39 billion in January
(4 March 2019) Malaysia’s trade expanded by 2.1% year-on-year to reach US$39 billion in January, said its Ministry of International Trade and Industry (MITI). Of the sum, the country’s exports grew 3.1% reaching US$85.41 billion, while its imports grew 1% reaching US$2.82 billion. According to MITI, January’s exports growth was driven by higher exports to China, Thailand, South Korea and the US. The key exports which contributed to the growth in exports were electrical and electronic (E&E) products, liquefied natural gas (LNG), timber and timber-based products.

Philippines and Malaysia agree to pursue stronger trade and investment ties
(7 March 2019) Malaysian Prime Minister Mahathir Mohamad’s two-day state visit to the Philippines concluded with both countries committing to pursue greater trade and investment cooperation in various areas. Among the highlights were the anticipated signing of a memorandum of understanding to advance bilateral cooperation in the healthcare industry, as well as discussions around developing barter trade in Mindanao, and opportunities presented by the untapped potential of the Philippines’ halal industry. In his keynote address at the Malaysian-Philippines Business Forum, Mahathir also touched on the need for ASEAN countries to explore the adoption of a market sharing concept, where each country selects an industry to capitalise on in order to reap the full benefits of the ASEAN market.

The Philippines expects slower growth in services exports in 2019
(1 March 2019) The Philippines has lowered its forecast for exports of services from double-digit to single-digit growth in 2019 due to stiffer competition in the services sector, announced its Department of Trade and Industry (DTI). As such, the government has set a US$42.6 billion to US$43.7 billion target for services exports this year, while it retains its double-digit growth target of US$51.2 billion to US$52.7 billion for merchandise exports. Nonetheless, the DTI feels that the country is “on track” to hit its goal of US$122 billion to US$130 billion in total exports by 2022.

Brunei and Malaysia look to enhance trade and investment cooperation
(6 March 2019) Malaysian Prime Minister Mahathir Mohamad welcomed the Sultan of Brunei Sultan Hassanal Bolkiah to Putrajaya on March 5 for the 22nd Malaysia-Brunei Annual Leaders Consultation. Topics discussed by the heads of state during the meeting included economic cooperation, as well as cooperation in the transport, information and communications, energy, tourism, agriculture, livestock and fishery industries. The leaders also noted the progress made by state-owned petroleum entities PETRONAS and PetroleumBRUNEI in advancing cooperation under the Commercial Agreement Areas (CAA) and Production Sharing Agreements (PSA). According to Bernama, Malaysia accounted for 90.9% of Brunei’s foreign direct investment from ASEAN countries in 2017 at US$486.74 million. Bilateral trade between the countries reached US$981.2 million in 2018.

Hong Kong opens ASEAN trade office in Bangkok to boost trade ties
(1 March 2019) Hong Kong chief executive Carrie Lam announced the opening of its first Economic and Trade Office in Thailand to bolster trade and investment between the two countries, as well as the larger ASEAN region and China’s Greater Bay Area (GBA). The move follows the recent finalisation of the Hong Kong-ASEAN Free Trade Agreement, which is expected to come into effect in the second quarter of 2019. Thai Deputy Prime Minister lauded the announcement, saying that Thailand could lead ASEAN and the Greater Mekong Subregion to greater connectivity with Hong Kong and mainland China. Separately, Myanmar’s parliament approved the country’s participation in the ASEAN-Hong Kong Investment Agreement on the same day.

Singapore to expand FTAs and prepare local talent to navigate international markets
(4 March 2019) Singapore will focus on expanding its network of free trade agreements (FTAs) and developing a pipeline of local talent who are well-equipped to navigate global markets in preparation for a new phase of growth, said trade and industry minister Chan Chun Sing during his recent parliamentary speech. Furthermore, the ministry will keep a close watch on developments in international taxation in order to position the country as a choice business destination. According to Chan, Singapore’s FTAs helped local companies save around US$730 million on tariffs in 2016, up from US$450 million a decade before.

Singapore, UAE sign agreement to boost trade and tourism cooperation
(1 March 2019) His Highness Sheikh Mohamed bin Zayed Al Nahyan the Crown Prince of Abu Dhabi’s official visit to Singapore culminated in the signing of the Joint Declaration on a Singapore-United Arab Emirates (UAE) Comprehensive Partnership that aims to elevate bilateral ties and intensify cooperation between the two countries. Speaking at the ceremony, Sheikh Mohamed extolled Singapore’s achievements and said that the UAE was especially keen to cooperate with the island country in the areas of “sustainable development and post-oil readiness policies”. Other areas include education, human resource development, defense and security, as well as trade and investment. According to The Straits Times, bilateral trade between the countries is valued at US$18.1 billion. Singapore is the second stop on Sheikh Mohamed’s tour of Asia, with the first being South Korea.

ASEAN urged to work towards single shipping market
(6 March 2019) The 37th ASEAN Maritime Transport Working Group (MTWG) Meeting convened in Singapore on March 5 to discuss the advancement of maritime transport-related initiatives under ASEAN’s 10-year transport master plan — also known as the Kuala Lumpur Transport Strategic Plan 2016-2025 (KLTSP). The meeting opened with remarks by a senior official of Singapore’s Ministry of Transport, who stressed the importance of reducing cross-border barriers and creating a single shipping market in order to enable a “free flow of intra-ASEAN shipping services”. Other matters discussed during the meeting included the promotion of sustainable international shipping, maritime transport safety and the ASEAN Green Ship strategy.