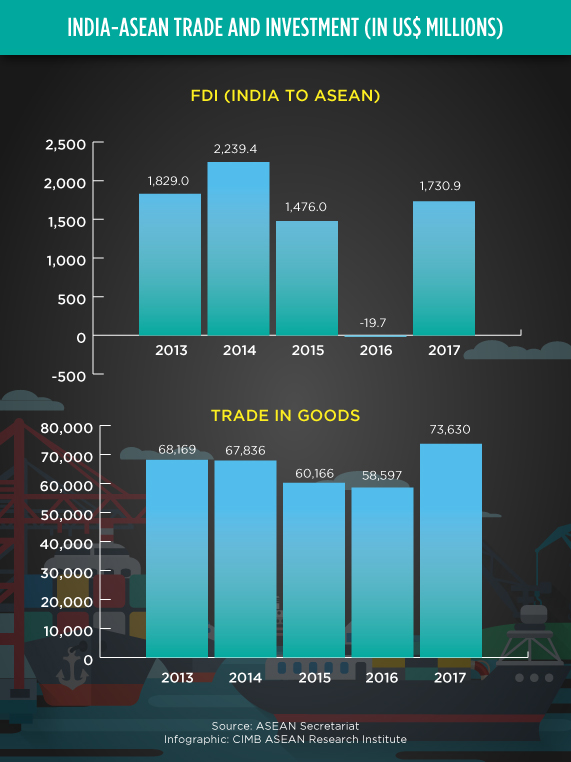 ASEAN and India aim for US$200 billion in annual trade by 2022
(25 February 2019) ASEAN and India aim to reach US$200 billion in trade by 2022 — a significantly higher target than the US$73.6 billion recorded in 2017, according to a Bernama report. Speaking at the 4th India-ASEAN Expo held in New Delhi on February 21-22, the secretary-general of Malaysia’s Ministry of International Trade and Industry Datuk Lokman Hakim Ali said that businesses in India must recognize and seize opportunities presented in these regions, especially since the ASEAN bloc is expected to overtake the European Union and Japan to become the fourth-largest global economy by 2030. In turn, Indian junior commerce minister CR Chaudhary said that the government has identified investment and collaboration opportunities in 12 key high-growth areas in ASEAN, in industries such as medical services, tourism, information technology and hospitality. Meanwhile, the 19th ASEAN-India Joint Cooperation Committee (AIJCC) Meeting held in Jakarta on February 26 concluded with the parties agreeing to elevate cooperation in various areas and establish an ASEAN-India university network. India also committed to lending up to US$1 billion for the development of infrastructure and digital linkages with ASEAN.

Indonesia asks India to cut palm oil tariffs in exchange for sugar imports
(25 February 2019) Indonesia has urged India to lower tariffs on refined Indonesian palm oil exports by five percentage points to 45% to match tariffs that India imposes on Malaysian palm oil. In return, Indonesia will offer greater market access for Indian sugar. The request was made by Indonesian trade minister Enggartiasto Lukita during a meeting with Indian commerce minister Suresh Prabhu on the sidelines of the 4th India-ASEAN Expo and Summit in New Delhi. According to Enggartiasto, India “responded positively” to the request. Figures from the Indonesian palm producers association show that Indonesia exported 6.7 million tonnes of palm oil to India in 2018.

India seeks to broaden trade with Cambodia
(26 February 2019) India is exploring possible new investments in Cambodia especially in the fields of science and technology, tourism infrastructure and manufacturing, according to a statement from the Cambodian Ministry of Commerce. The statement comes on the back of a meeting between Cambodian commerce minister Pan Sorasak and the Federation of Indian Chambers of Commerce and Industry (FICCI) held on the sidelines of the 4th India-ASEAN Expo and Summit in New Delhi. According to the statement, FICCI president Sandip Somany said that India sees great potential in the Cambodian market and it hopes to increase trade and investment in the country. Meanwhile, Sorasak asked for a direct flight between the countries to be established in order to improve connectivity.

Japan and ASEAN revise free trade pact
(27 February 2019) The Japanese government approved the revision of its Economic Partnership Agreement (EPA) with ASEAN on February 27 aimed at further strengthening economic cooperation between the countries. The EPA first came into effect in 2008 and was Japan’s first multilateral free trade agreement. The revised EPA is expected to come into effect after it passes the Japanese parliament in the fall and is ratified by all ASEAN countries. Japan’s total trade with the ASEAN bloc in 2018 was valued at US$108 billion. The revised pact is expected to focus on the services sector and investments.

Singapore-EU trade hits record high
(22 February 2019) Total trade between Singapore and the European Union (EU) crossed the €100 billion mark (US$114 billion) in 2017, according to new data released by the European Commission. Of the sum, trade in goods reached €53.3 billion (US$60.7 billion) while trade in services reached €51.1 billion (US$58.2 billion). Furthermore, trade in goods between the parties reached a record high of €58.1 billion (US$66.1 billion) in 2018 — a 9% increase from the previous year. However, similar data for trade in services in 2018 has yet to be released. Speaking on the matter, EU Ambassador to Singapore Barbara Plinkert said that the record-breaking figures was clear evidence of the dynamic relations between the parties that will only continue to grow with the ratification of the EU-Singapore Free Trade Agreement.

Indonesia grants greater duty-free access to Pakistan’s exports
(26 February 2019) Indonesia has granted tariff-free status to 20 key exports from Pakistan under a correction to the Indonesia-Pakistan Preferential Trade Agreement (IPPTA). The move comes as the IPPTA — signed in 2012 — failed to boost Pakistan’s exports to Indonesia, falling from US$236 million in 2011-12 to US$141 million in 2016-17. While 2017-18 saw Pakistan’s exports return to US$296 million, the trade deficit between the countries is tilted in Indonesia’s favour with Indonesia’s exports to Pakistan rising to US$2.53 billion in the same period. As such, the zero-duty status for 20 products that are of Pakistan’s “prime interest” will come into effect immediately beginning March 1.

Malaysia-Norway bilateral trade reached US$614 million in 2018
(26 February 2019) Trade between Malaysia and Norway grew by 72% in the past ten years to reach US$614 million in 2018, according to Norwegian trade and industry minister Torbjorn Roe Isaksen. Of the sum, Malaysia’s exports to Norway amounted to US$442 million while its imports from the same was valued at US$196 million. Additionally, Norway’s Pension Fund Global has so far invested around US$3.8 billion in 200 companies in Malaysia in stocks and sovereign bonds. In commenting on the issue of palm oil, Isaksen stressed that the Norwegian parliament did not impose a blanket ban on palm oil and that it merely wants to ensure that any biofuel that the country imports is sustainably produced. Furthermore, Isaksen expressed his hope that negotiations for Malaysia’s free trade agreement with the European Free Trade Association will resume soon.

Malaysia and Brunei look to increase bilateral trade and investments
(28 February 2019) During her official two-day visit to Brunei, Malaysian Deputy Prime Minister Dato Seri Dr. Wan Azizah encouraged Bruneian and Malaysian businesses to work together to remain competitive and increase trade between both countries. According to Brunei’s energy, manpower and industry minister Dato Dr Hj Mat Sunny, total bilateral trade between the countries reached US$1 billion in 2018, while Malaysian investments in Brunei totalled over US$670 million in 2017. He further noted that Malaysia’s investments largely went to Brunei’s energy sector, totalling US$500 million in 2017.

World’s largest natural rubber producing countries agree to trim exports
(22 February 2019) The world’s three largest natural rubber producing countries — Malaysia, Indonesia and Thailand — agreed to reduce natural rubber exports from their respective countries by 200,000 to 300,000 tonnes in accordance with the Agreed Export Tonnage Scheme (AETS). The announcement was made in a joint statement by the three countries after the Special Ministerial Committee Meeting of the International Tripartite Rubber Council (ITRC) held in Bangkok on February 22. The move comes as natural rubber prices remain discouragingly low amid uncertainty in the global economy and it is hoped that the regulation of such output will help improve prices. Nonetheless, all three countries will seek to counterbalance the decrease in exports by raising domestic consumption “significantly” through the Demand Promotion Scheme (DPS). All three countries also discussed forming a Asean Rubber Council as a platform to discuss the development of the natural rubber industry.

Vietnam orders 110 Boeing jets worth over US$15 billion
(27 February 2019) Vietnam’s Vietjet and Bamboo Airways placed orders for 110 aircrafts from Boeing Co. on the sidelines of US President Donald Trump and North Korean leader Kim Jong-Un’s summit in Hanoi. Of the sum, Vietjet ordered 100 737 MAX planes worth US$12.7 billion, while Bamboo Airways ordered 10 787 planes worth US$2.9 billion. These purchases come on the back Vietnam receiving the US aviation administration’s authorization to fly to the US and codeshare with US airlines, as well as Vietjet’s US$5.3 billion deal with General Electric to provide long-term engine support for a class of engines in its fleet.