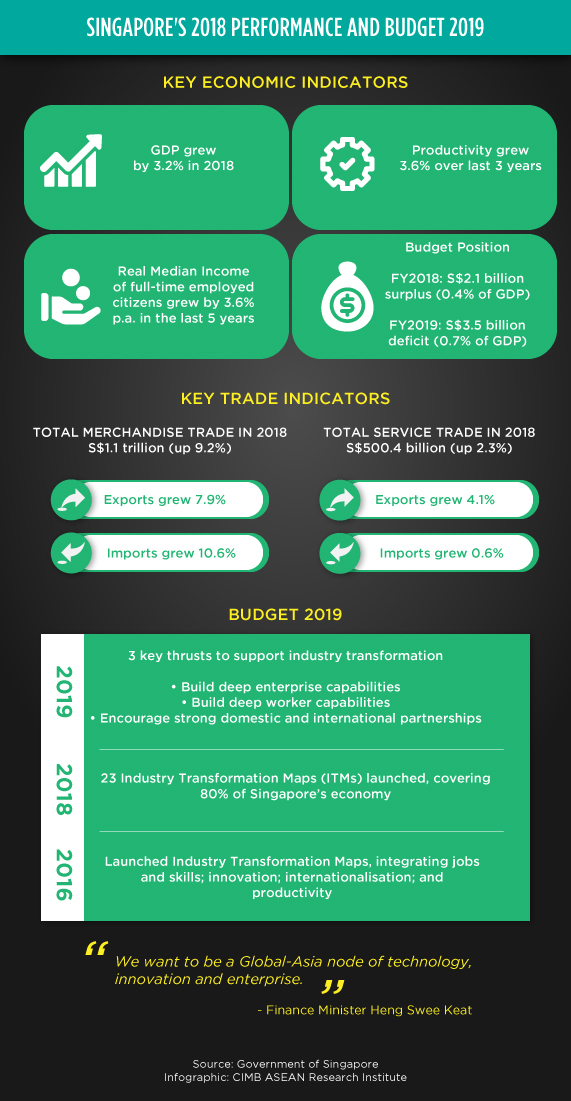 Budget 2019 launched by Finance Minister Heng Swee Keat
(19 February 2019) Singapore Finance Minister Heng Swee Keat announced the country’s Budget 2019 on February 19 with an eye on supporting industry transformation, accelerating enterprise growth and positioning Singapore as a global leader in technology, innovation and enterprise. To this end, Heng outlined three key pillars to keep Singapore’s industry transformation on track, i.e. building deep enterprise capabilities, building deep worker capabilities and encouraging strong partnerships. Firstly, the government allocated S$4.6 billion (US$3.4 billion) to boost business capabilities in the next three years, of which S$3.6 billion (US$2.7 billion) will be used to help its workforce enter new growth areas and S$1 billion (US$739 million) to help firms grow deep enterprise capabilities. Secondly, numerous enterprise development funds and programmes will be created or continued, including an additional S$100 million (US$73 million) co-investment fund to help enterprises scale up. Thirdly, the government will work with local trade associations and chambers (TACs) to develop multi-year roadmaps as part of its focus to forge deeper partnerships locally and globally. On the trade front, the government will focus on streamlining trade processes to help businesses make better use of free trade agreements, while facilitating the secure exchange of electronic trade documents

Thailand’s GDP growth in 2018 exceeds forecasts despite slowing export growth
(18 February 2019) Thailand’s economy expanded at its fastest pace in six years in 2018, fueled by stronger domestic demand and tourism arrivals in the fourth quarter which helped offset slowing export growth. According to the National Economic and Social Development Council (NESDC), GDP grew 4.1% in 2018, up 0.1% from the previous year. The state planning agency also maintained its 3.5%-4.5% growth projection for 2019 despite cutting its forecast for exports in 2019. Analysts noted however the key risks to growth outlooks will be the possibility of unrests due to the election to be held on 24 March. Meanwhile, the use of free trade agreement (FTA) and Generalised System of Preferences (GSP) privileges by Thai exporters reached nearly US$80 billion in 2018, beating the government’s US$70.8 billion target. According to the Thai Foreign Trade Department, Thai-ASEAN FTAs recorded the highest use, totalling US$26.9 billion, followed by FTAs with China, Australia, Japan and India. The department attributed the rise in utilisation to the government’s trade facilitation efforts and expansion into new export markets.

Indonesia passes new cryptocurrency trading regulations
(18 February 2019) The Indonesian Ministry of Trade’s Commodity Futures Trading Regulatory Agency (Bappebti) announced a new legal framework to regulate crypto assets on futures exchanges in the country. Under the regulations, entities involved in crypto futures trading must seek regulatory approval and meet a set of requirements in order to operate legally in Indonesia. For instance, platforms offering this mode of trading must have paid-up capital of at least US$106 million and maintain a closing capital balance of US$85 million. Further, crypto futures trades and storage service providers must maintain a minimum paid-up capital of US$71 million and minimum closing balance of US$57 million. These regulations follow Bappeti’s previous announcement which officially recognised Bitcoin and other digital assets as trading commodities.

Brunei and Laos sign MOUs on education, information and trade
(19 February 2019) The Sultan of Brunei, Sultan Hassanal Bolkiah hosted a banquet for Lao Prime Minister Dr Thounglun Sisolith on February 16 which culminated in the inking of several memorandum of understandings (MOUs). Among the MOUs signed were agreements between the countries’ National Chambers of Commerce to boost micro, small and medium enterprises, and coordinate information sharing to encourage business opportunities between the countries. Meanwhile, the Sultan also hosted a meeting with the chair of the Russian parliament Valentina Matvienko on February 19 to discuss opportunities to heighten trade, economic and investment cooperation between the countries. According to figures from the Russian parliament, bilateral trade between Brunei and Russia reached US$18.5 million in 2015 due to a contract with a Russian oil producer, but fell to around US$740,000 when said contract ended.

Philippines and the United States to hold bilateral talks on free trade
(19 February 2019) The Philippines is one of four countries that the US hopes to establish a free trade agreement with and industry players hope that the government will be well prepared to take full advantage of the proposed FTA during negotiations. According to Philippines telco head Manuel V. Pangilinan, initial discussions revolved around greater access for trade, services and investments. Former US Ambassador to the Philippines John Negroponte added that there was a need to include clauses on digital commerce in the FTA, as was included in the US trade agreement with Mexico and the Trans-Pacific Partnership.

Indonesia eyes Eurasian market through the EEU
(17 February 2019) Indonesia will expand its reach in the European market when it signs a memorandum of cooperation (MOC) with the Eurasian Economic Union (EEU) later this year, said Indonesian trade minister Enggartiasto Lukita. Trade between Indonesia and the EEU (Russia, Kazakhstan, Belarus, Armenia, Kyrgyzstan) was valued at US$2.79 billion in 2017 and Indonesia hopes to double this figure in the next five years. According to Enggartiasto, Indonesia hopes to eventually sign a Comprehensive Economic Partnership Agreement (CEPA) with the EEU, but said that negotiations would likely take a long time as it would involve the five EEU member countries. EEU integration and macroeconomics minister Tatyana Valovaya lauded the move, saying that the MOC will help reduce trade barriers between the two parties and that a free trade agreement was indeed a possibility in the future.

Indonesia and Australia to sign trade pact in March
(15 February 2019) Indonesia and Australia will sign a long-awaited trade deal in March after eight years of negotiations, according to a recent article by The Straits Times. The trade deal is expected to increase bilateral trade between the countries, which stood at US$11.7 billion in 2017. Once ratified, the agreement will give Australian farmers, universities and health providers greater access to the Indonesian market. In turn, Indonesia’s automotive, textile, timber, electronic and medicinal sector will gain greater access to the Australian market. The deal was expected to be signed by the end of 2018, but was stalled due to diplomatic tensions after Australia proposed relocating its Israeli embassy to Jerusalem in October 2018.

Indonesia and South Korea aim to sign trade deal by November
(19 February 2019) Indonesia and South Korea announced on February 19 that they will relaunch negotiations for the Indonesia-Korea Comprehensive Economic Partnership Agreement (IK-CEPA), which they now hope to conclude by November. Negotiations between the parties first commenced in 2012, was put on hold in 2014, and was recently revived when the countries’ trade ministers expressed their commitment to resuming talks. According to Indonesian trade minister Enggartiasto Lukita, the agreement could increase bilateral trade from US$20 billion in 2018 to at least US$30 billion in the next three years. He noted that the Vietnam-South Korea bilateral trade had reached US$60 billion and it was important for Indonesia to not lag behind. South Korean trade minister Kim Hyun-chong lauded the move, saying that the country looks forward to collaboration in the technology, chemical and construction sectors.

South Korea gears up for special summit with ASEAN in November
(19 February 2019) South Korea began preparations for the 30th ASEAN-ROK dialogue forum and 2019 ASEAN-ROK Commemorative Summit in November. To this end, the government will launch a preparatory task force to coordinate the event, alongside commemorative events held in both regions throughout the year. For instance, the ASEAN-Korea Center (AKC) held its annual council meeting on February 18, where AKC Secretary-General Lee Hyuk expounded on the role of South Korea’s New Southern Policy in promoting greater ties between the parties. In 1989, the trade volume between both countries amounted to only US$75 billion. However, the figure has since risen to US$160 billion in 2018 and ASEAN countries remain the most popular tourism destination among Koreans, with the number of Korean visitors reaching 7.64 million in 2018.