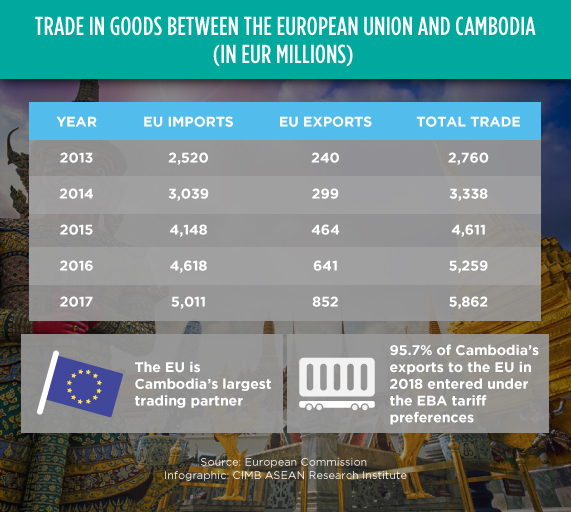 EU begins process to withdraw Cambodia’s EBA preferential trade tariffs
(11 February 2019) The European Union (EU) announced on February 11 that it has begun an intensive 18-month review process that could result in the rescindment of the bloc’s Everything But Arms (EBA) privileges for Cambodia. The process comprises six months of monitoring and discussions with Cambodian authorities, followed by six months for the European Commission to produce a report and make its decision. The Cambodian government responded to the announcement by expressing “deep regret” over the EU’s decision and unveiling several measures to cushion the impact of possible trade sanctions. These measures include the cancellation of Export Management Fee (EMF) charges, the withdrawal of Import-Export Inspection and Fraud Repression (CamControl) units from all border checkpoints, as well as the reduction of production costs, transportation fees and electricity tariffs across ministries and institutions.

EU parliament approves EU-Singapore trade deal
(13 February 2019) The European Parliament voted in favour of the EU-Singapore Free Trade Agreement (EUSFTA) on February 13, thus paving the way for the pact to be ratified and enforced. 84% of Singapore’s exports to the EU will enjoy zero-tariff privileges once the agreement takes effect, while other products will also attain such privileges in three to five years. Singaporean trade relations minister S. Iswaran lauded the EU’s announcement, saying that the agreement will pave the way for an EU-ASEAN FTA. Besides the EUSFTA, two other agreements also passed the EU Parliament’s vote. They are the EU-Singapore Investment Protection Agreement (IPA), which will replace 12 existing bilateral investment treaties between the parties, and the EU-Singapore Partnership and Cooperation Agreement which will provide the parties a cooperation framework in key political areas.

No-deal Brexit will not “fundamentally impair” UK-Singapore trade
(13 February 2019) Singapore stands ready to apply principles in the EUSFTA in a UK-Singapore context even if the United Kingdom (UK) leaves the EU without a withdrawal agreement, said Singapore trade and industry minister Chan Chun Sing. Chan also said that while a no-deal Brexit could affect business sentiments in the UK and EU and have negative effects on the global environment, trade between the UK and Singapore will likely not be fundamentally impaired. The minister further noted that the UK is the second-largest economy in the EU and an important economic partner to Singapore. As such, Singapore is ready for any possible scenario if the UK leaves the EU — whether on March 29 or at a later date.

ASEAN-HK FTA likely to come into force in 2019
(13 February 2019) The ASEAN-Hong Kong Free Trade Agreement (FTA) negotiations are in its final stages and may very well come into effect this year, said the head of the Hong Kong Economic and Trade Office in Jakarta. According to the official, all ASEAN Member States are currently executing the necessary domestic ratifications and procedures which will allow the FTA to come into force. Representatives from Hong Kong and ASEAN signed the pact and the investment agreement in November 2017. Among the notable clauses under the FTA is the agreement by Brunei, Malaysia, Thailand and the Philippines to cut up to 85% in tariffs for Hong Kong within 10 years.

Indonesia defends palm oil after EU targets 2030 phase-out in road fuel
(13 February 2019) The European Commission is set to release a draft proposal which concluded that palm oil cultivation results in deforestation and its use in transport fuel should therefore be phased out by 2030. According to the proposal, 45% of extra land used for palm oil production since 2008 had been forested, as opposed to 8% for oil crop soybeans, and 1% for sunflowers and rapeseed. On the other hand, Indonesia argued that soy requires ten times the cultivation area that palm requires, while rapeseed requires up to six times the cultivation area that palm does. In such a comparison, palm’s higher production yield would make it the superior option. As such, Indonesia will challenge the proposal at the World Trade Organization (WTO) on the basis that it defies free trade principles and that the method used to measure the sustainability of produce is unfairly skewed in favour of European vegetable oils. Meanwhile, Malaysia is mulling the establishment of a biofuel stabilisation fund to stabilise the biofuel prices as it aims to raise the use of palm oil in transport biodiesel to 20% in 2020.

Malaysia’s economy grew by 4.7% in 2018
(14 February 2019) Malaysia’s GDP grew by 4.7% both in the fourth quarter of 2018 and in 2018 as a whole. The 4.7% announcement was made by Bank Negara Malaysia (BNM), whose governor Datuk Nor Shamsiah Mohd Yunus said was a “highly respectable” growth rate, despite not meeting the central bank’s initial forecast of 4.8%. According to BNM, Malaysia’s growth in 2018 was fuelled by stronger private consumption in the services sector and consumer-related manufacturing clusters. The economy is expected to remain on a steady growth path throughout 2019 as Malaysia weathers the effects of global trade tensions and changes in US monetary policies. Nor Shamsiah also said that the country’s future growth will be supported by the commencement of mammoth projects such as the Refinery and Petrochemical Integrated Development (RAPID) project in Johor, the establishment of new E&E facilities, civil engineering projects such as the Mass Rapid Transit 2 (MRT2) and the Pan Borneo Highway — alongside sustained domestic demand and recovery on the supply side.

Trade deficit widens to record US$41 billion in 2018
(13 February 2019) The Philippines’ trade deficit reached a record high of US$41.44 billion last year as the country saw a sharp rise in imports and lacklustre exports, according to the latest Philippine Statistics Authority (PSA) report. The National Economic and Development Authority (NEDA) attributed the slump to global economic uncertainties as well as the slowing of the Chinese economy. Trade secretary Ramon M. Lopez concurred with the NEDA’s statement, saying that other ASEAN economies were also impacted by these factors, and that this attributed for the decline in exports in December 2018. However, a representative of the country’s semiconductor and electronics industry argued otherwise, saying that the industry’s biggest concern is uncertainties in the government’s policies on corporate tax and incentives and that they were relatively unaffected by the US-China trade war.

E-commerce imports leads to the rise in import duties revenue for Indonesia, while also widening trade deficit
(13 February 2019) According to the Indonesian Finance Ministry’s Customs and Excise Directorate General, the country’s imports of e-commerce products rose 9.11% to reach US$17.17 billion last year, thus contributing US$84.65 million in import duties to state revenue. However, e-commerce imports also caused Indonesia’s trade deficit to reach US$8.57 billion in 2018. Speaking on the matter, the Centre for Indonesia Taxation Analysis (CITA) said that e-commerce players ought to take advantage of the current absence of taxes in e-commerce transactions before the government’s new e-commerce taxation law takes effect on 1 April. Meanwhile, a recent report suggests that digital trade could be the largest contributor to Indonesia’s domestic economy by 2030, worth up to US$172 billion or 9% of the country’s projected GDP.

The Philippines issues new cryptocurrency regulations, launches first crypto ATM
(12 February 2019) The Philippines released a new set of Digital Asset Token Offering (DATO) regulations to regulate the acquisition of crypto assets. The Cagayan Economic Zone Authority (CEZA) will be the principle regulating authority, while the Asia Blockchain and Crypto Association (ABACA) will help implement and enforce the rules. Under the new rules, all tokens — including utility and security tokens — must publish offering documents with a set of pertinent details, and these tokens must be listed on the licensed Offshore Virtual Currency Exchange (OVCE). Meanwhile, a major Philippine bank recently launched the country’s first two-way virtual currency automated teller machine (ATM) which allows clients to convert pesos to virtual currency and vice versa.

Grab and Go-Jek secure new funding in battle for dominance in Southeast Asia
(9 February 2019) Thailand’s largest retail conglomerate Central Group recently announced a US$200 million investment into ride-hailing company Grab, as the companies look to expand their existing partnership. Grab chief executive Anthony Tan said that this is the first time a local partner has invested in Grab’s local business, while Central Group president Yol Phokasub said the investment in Grab will help Central Group meet the growth in on-demand deliveries. Similarly, Go-Jek announced that it has closed a fresh round of funding — rumoured to amount to US$1 billion — from industry heavyweights such as Google, Tencent, JD.com and Mitsubishi. Both companies are racing to dominate the Southeast Asian market, which according to a Google-Temasek report, could be worth up to US$31 billion by 2025.