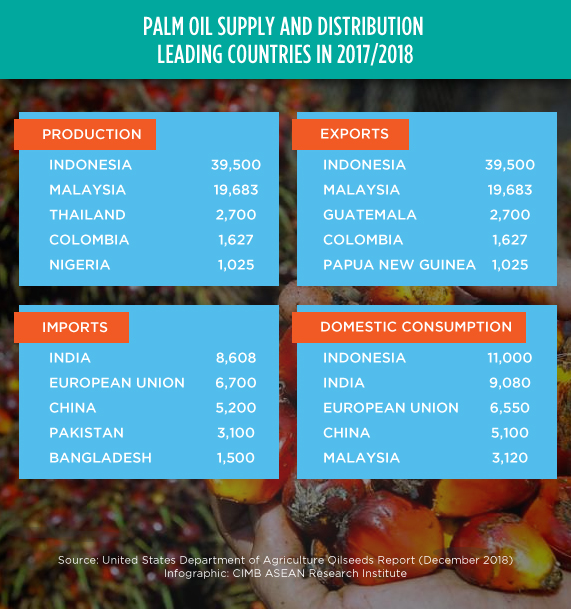 Malaysia seeks new markets for palm oil exports
(30 January 2019) Malaysia is looking to increase its market share of palm oil exports in ASEAN countries as well as new markets such as Africa, Pakistan and Turkey. Furthermore, the country will chair the upcoming Council of Palm Oil Producing Countries (CPOPC) meeting in Jakarta on February 28 to discuss the development of the palm oil industry and issues surrounding it such as the recent boycott of palm oil imports by several European countries. According to the Malaysian Palm Oil Council (MPOC), Malaysia is the second biggest palm oil producer after Indonesia, with its overall production accounting for 39% of global output and 44% of the global market share. Palm oil also accounts for over 8% or approximately US$19.5 billion of Malaysia’s total exports.

EU Trade Committee greenlights EU-Singapore free trade agreement
(28 January 2019) The European Union’s Trade Committee has assented to the EU-Singapore Free Trade Agreement, paving the way for the finalization of the first bilateral trade agreement between the EU and a member of ASEAN. Key elements of the trade deal include removal of most tariffs between the two parties in five years, removal of non-tariff barriers on goods such as cars and electronics, greater access to Singapore’s public procurement market, as well as liberalisation of services including financial, postal, telecommunications, transport and information technology services. Once the agreement passes a European Parliament vote on February 12, the trade agreement will be passed to the EU Council for its assent while the investment protection agreement will need to be ratified by EU member states before it comes into force.

Brunei economy declines 1.2% year-on-year in Q3 2018
(25 January 2019) Brunei’s economy was greatly impacted by decreasing gas and methanol production in 2018, evidenced by the decline in the country’s GDP by 1.2% in the third quarter and 2.8% in the second quarter of the year. Oil and gas accounts for 57.3% of Brunei’s economic activity and 90% of government revenue. Statistics released by its Department of Economic Planning and Development (DEPD) on January 24 found the oil and gas sector to have declined by 2.4%, liquefied natural gas (LNG) and methanol by 7.4%, and oil and gas mining by 0.7%. Further, the report attributed the decline in GDP to the 75.2% decrease in net exports of goods and services, and estimated the country’s GDP at current prices in Q3 2018 at US$4.5 billion.

Cambodia’s trade deficit grew by 22% in 2018
(29 January 2019) Cambodia’s trade deficit reached US$5.2 billion in 2018 as the country’s imports (US$18.8 billion) continue to outstrip its exports (US$13.6 billion), according to a report published by the National Bank of Cambodia (NBC) on January 27. The report found that the increase in imports was largely due to a higher demand for construction materials, raw materials for manufacturing, vehicles and food-related goods. Data from the NBC also found the EU to be the largest market for Cambodian exports last year, accounting for 29% of its total exports. The EU is followed by the US (24%), the United Kingdom (9%) and Japan (8%). Meanwhile, Cambodia’s imports largely originated from China (40%), Thailand (15.5%), Vietnam (11.7%) and Japan (4%).

Indonesian crude oil producer eyes US$1 billion investment in Philippines LNG project
(30 January 2019) Indonesia’s second-largest crude oil producer PT Pertamina has expressed an interest to invest up to US$1 billion in the development of a LNG hub in the Philippines, said Philippines trade and industry secretary Ramon M. Lopez, who indicated that this was a sign of investor confidence in the country. According to a statement by the Philippine trade department, the state-owned PT Pertamina stands ready to offer its expertise by investing in floating or land-based LNG regasification units. Lopez’s declaration that the Philippines is “very much open for LNG investors” comes as no surprise as the country has been importing LNG to fuel its power plants in Batangas as domestic gas supplies from the country’s Malampaya field is set to run out as early as 2024.

Myanmar government’s investment summit showcases projects worth over US$3 billion
(28 January 2019) The Myanmar government hosted its first official summit for international investors in Naypyitaw on January 28-29 showcasing 120 projects with a combined value of over US$3 billion. Speaking at the opening address, State Counselor Daw Aung San Suu Kyi touted Myanmar’s low labour costs, strategic geographical location between India and China, as well as its proximity to the Bay of Bengal and Andaman Sea, as advantages in investing in the country. The summit comes under the Myanmar Investment Promotion Plan (MIPP), which aims to attract an average of US$8.5 billion a year by 2026, US$12.3 billion by 2031 and US$17.6 billion by 2036. The MIPP also aims to push the country into the top 100 countries on the World Bank’s ease of doing business index by 2020 and the top 40 by 2035.

Thailand to push for the conclusion of RCEP negotiations in 2019
(29 January 2019) Thailand aims to conclude negotiations pertaining to the Regional Comprehensive Economic Partnership (RCEP) by the end of the year in order to cushion the effects of the US-China trade war, said the director-general of the Thai Commerce Ministry’s Department of Trade Negotiations (DTN) Auramon Supthaweethum. According to Supthaweethum, exports contribute up to 70% of the country’s GDP. As such, the finalisation of the RCEP is a top economic priority for Thailand as ASEAN Chair as the pact would help bolster the country’s chances of achieving its export growth target of 8% in 2019. She added that the DTN is also in discussions with Sri Lanka, Turkey and Pakistan, and it hopes to complete draft FTAs with these countries by the end of the year.

India looks to boost trade with ASEAN countries through MSME exports
(26 January 2019) India is looking to boost its micro, small and medium enterprise (MSME) exports to ASEAN countries as the country is far from living up to its trade potential with the region, said Indian High Commissioner to Singapore Jawad Ashraf during the five-day India Week held in Singapore recently. According to Ashraf, India’s trade with ASEAN constitutes only 2.5% of the bloc’s total trade and the High Commission is prioritizing MSMEs as they account for over 45% of India’s exports. He also expressed the country’s aspirations to elevate cooperation with the region through the existing ASEAN-India Free Trade Agreement, upcoming Regional Comprehensive Economic Partnership (RCEP), and the India-Singapore Comprehensive Economic Cooperation Agreement (CECA) which is currently undergoing a third review.

European firms urge ASEAN members to hasten regional economic integration /a>
(29 January 2019) Only 12% of European businesses polled in a business sentiment survey conducted by the EU-ASEAN Business Council (EU-ABC) in 2018 believe that ASEAN has succeeded in its goal of serving as an integrated regional market and production hub. Of the 330 European executives in Southeast Asia surveyed, 54% feel that ASEAN economic integration is moving too slowly, while 67% feel that there are still far too many knots in regional supply chains to operate efficiently. Speaking at a briefing in Makati City, the EU-ABC’s executive director noted that the majority of respondents viewed ASEAN as the region “with greatest economic potential” but noted that much needs to be done in order to meet its objectives of lowering trade barriers and doubling intra-ASEAN trade by 2025.