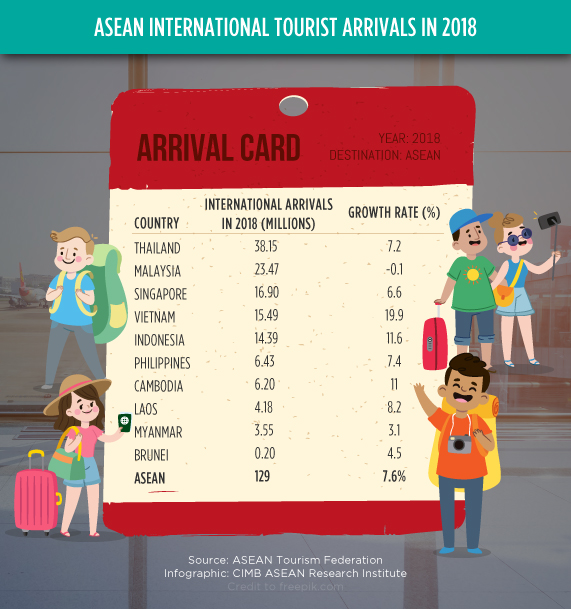 Vietnam, Indonesia and Cambodia lead ASEAN tourist arrival growth in 2018
(22 January 2019) The ASEAN Tourism Federation found tourist arrivals in the region to have grown by 7.4% in 2018, reaching a total of 129 million tourists. Thailand, Malaysia and Singapore saw the highest number of tourist arrivals; while Vietnam, Indonesia and Cambodia enjoyed the highest growth rate in arrivals in 2019 with Malaysia being the only country recording negatve growth in ASEAN. According to Cambodian tourism minister Thong Khon, the country welcomed 1.9 million Chinese nationals in 2018, representing a 70% increase in visitors from China. The minister further added that the government expects three million Chinese tourists, and a total of seven million international tourists per year by 2020. The Cambodia Association of Travel Agents attributed the sharp increase in Chinese tourists to the effective policies of the Ministry of Tourism and tour operators’ efforts in targeting Chinese tourists in recent years.

ASEAN ministers pledge to continue to push for regional tourism integration
(21 January 2019) The 38th ASEAN Tourism Forum held in Vietnam’s Ha Long city came to a close with the region’s tourism ministers pledging to work together to implement a range of measures to raise the countries’ tourism profiles, including a push for the institution of a single entry visa to boost regional cross-country travel and measures to tackle overtourism. Further, the group agreed to add two categories to the ASEAN MICE Venue Standard (AMVS), i.e. the meeting room category and exhibition venue category, as part of its efforts to ensure that MICE (meetings, incentives, conferences, exhibitions) venue standards in ASEAN matched global standards. The AMVS, which was modeled after Thailand’s MICE venue standards in 2016, has been adopted by all ASEAN countries as the region looks to attract more international trade fairs. According to a Hong Kong-based consulting firm, trade fair organisers were able to sell space at as many as 2,353 events in Asia in 2018.

Korea, Japan and China committed to facilitating tourism exchanges with ASEAN
(20 January 2019) South Korea, Japan and China reaffirmed their commitment to continue fine-tuning tourism policies between ASEAN and their countries during the ASEAN Plus Three (APT) Tourism Ministers Meeting held in Ha Long City on January 18. South Korea’s tourism industry policy head said that the country will continue developing their visa programme in ASEAN countries. For instance, the visa system in Vietnam will be improved through the issuance of short term multiple entry visas for residents of Hanoi, Ho Chi Minh City and Da Nang. He added that South Korea welcomed 2.3 million visitors from ASEAN countries in 2018, and that the government hopes to reach 15 million travellers between South Korea and ASEAN by 2020. Also at the meeting was Japan’s parliamentary vice minister of tourism, who said that Japan saw a record high of three million visitors from ASEAN in 2017 and that the country is committed to promoting outbound tourism by identifying new foreign destinations for Japanese travelers.

All Thai villages to have internet access by the end of 2019
(24 January 2019) Thailand will provide internet access to 50,000 villages in 2019 as it aims for full nationwide broadband coverage by year end, said Thai digital economy and society minister Pichet Durongkaveroj. The initiative comes under the government’s Village Broadband Internet (Net Pracharat) Project, which in 2017 identified 75,000 villages in the country without internet access and has since installed fibre cable networks in 25,000 of these villages. According to the minister, the digital economy ministers of ASEAN have agreed to cooperate on improving the region’s digital infrastructure by increasing information sharing between ASEAN government agencies. Also speaking at the ASEAN Digital Infrastructure seminar organized by the ASEAN Business Advisory Council-Thailand (ASEAN BAC-Thailand) was Thai Digital Government Development Agency (DGA) president Sak Segkhoonthod, who shared the administration’s plan to enable 300 government agencies to provide digital one-stop services and equip all three million government officers with digital skills within the next five years.

ASEAN foreign ministers to raise collaborative efforts in developing the ASEAN Community
(19 January 2019) The ASEAN Foreign Ministers’ Retreat (AMM Retreat) held in Chiang Mai on January 18 concluded with ASEAN foreign ministers committing to advancing the ASEAN Community 2025 and Sustainable Development Agenda 2030. Also discussed at the meeting was the need to raise public knowledge of ASEAN. To that end, the ministers agreed to set up a Network of ASEAN Associations with the participation of academic and social institutions to improve public awareness of ASEAN in all member states. Indonesian Foreign Minister Retno L. P. Marsudi, in commenting on the matter, stressed the importance of including young people in the process of developing the ASEAN Community and used Indonesia’s annual election of an ASEAN Young Envoy as an example of such engagement.

Foreign ministers of EU and ASEAN come to agreement in Brussels
(21 January 2019) Foreign ministers of the European Union (EU) and ASEAN Member States convened in Brussels, Belgium on January 21 for the 22nd EU-ASEAN Ministerial Meeting. In a joint statement released after the meeting, the ministers reaffirmed their commitment in implementing the EU-ASEAN Plan of Action 2018-2022 and 2030 Agenda for Sustainable Development. The ministers also agreed in principle to upgrade EU-ASEAN relations to a Strategic Partnership, subject to the ironing out of details. Further, the group also agreed to intensify cooperation to conclude the EU-ASEAN Free Trade Agreement and EU-ASEAN Comprehensive Air Transport Agreement. Also notable was the group’s agreement to establish a joint working group between the EU and relevant ASEAN Member States to discuss issues relating to palm oil.

CPTPP Commission holds first meeting in Tokyo
(21 January 2019) The inaugural meeting of the Comprehensive and Progressive Agreement for Trans-Pacific Partnership (CPTPP) Commission held in Tokyo on January 19 culminated with the adoption of a joint statement by the partnership’s 11 member nations. The joint statement reaffirmed the member nations’ commitment to fully enforcing the CPTPP to advance trade liberalisation, foster economic growth, and set high and fair trade standards. Further, four key decisions were made; namely that of the Commission’s operating mechanisms; new member’s admission process, a state-to-state dispute arbitration tribunal, and a code of conduct for arbitrators in dispute settlements between a state and an investor.

Singapore releases governance framework for ethical and responsible use of AI in Davos
(23 January 2019) Singapore presented a framework for ethical and responsible use of artificial intelligence (AI) and welcomed industry input at the World Economic Forum (WEF) in Davos, Switzerland. According to Singapore’s Infocomm Media Development Authority (IMDA), the framework is the first in Asia to provide comprehensive guidelines that can be immediately adopted by private sector institutions using AI. Further, the framework is underpinned by two principles, i.e. AI solutions are human-centric, and decisions made by or with the help of AI shall be explainable, transparent and fair to consumers. Singapore communications and information minister S. Iswaran, who launched the framework in Davos, expounded on the country’s many AI initiatives which includes the formation of an Advisory Council on the Ethical Use of AI and Data chaired by a former attorney-general.

Indonesia ‘strongly welcomes’ the global economic slowdown
(23 January 2019) Indonesia Investment Coordinating Board chair Thomas Lembong said in an interview on the sidelines of the WEF that the softening of global economic growth was a blessing and should be viewed favourably. Lembong argued that the previous economic boom was built on financial risks, particularly an “out-of-control shadow banking sector in China and a bubble in technology shares and investments.” As such, he likened Indonesia’s growth to that of a tortoise’s slow but steady progress, saying that in a volatile world, the country can be seen as a steady investment destination. According to CNBC, the Indonesian economy has grown at an average of approximately 5% per year in the last five years and a poll of analysts by Reuters projected a similar growth rate in 2018.

Malaysia and Thailand to test round-the-clock border trade
(20 January 2019) Thailand and Malaysia announced the extension of the Sadao-Bukit Kayu Hitam Customs, Immigration and Quarantine (CIQ) Checkpoint’s operating hours to 24 hours to ease border traffic. The new operating time will come into effect on April 1 and be tested for three months. The announcement was made by Malaysian foreign minister Dato Saifuddin Abdullah and Thai foreign minister Don Pramudwinai, who also added that this extension was one of many initiatives by the governments to promote seamless connectivity along the shared border. According to the Thai Ministry of Commerce, trade between the two countries grew at an average of 10.54% annually in the last five years. Malaysia is also Thailand’s largest trading partner in ASEAN, with cross-border trade in 2018 valued at US$26.5 billion, of which border trade accounted for over 60%.