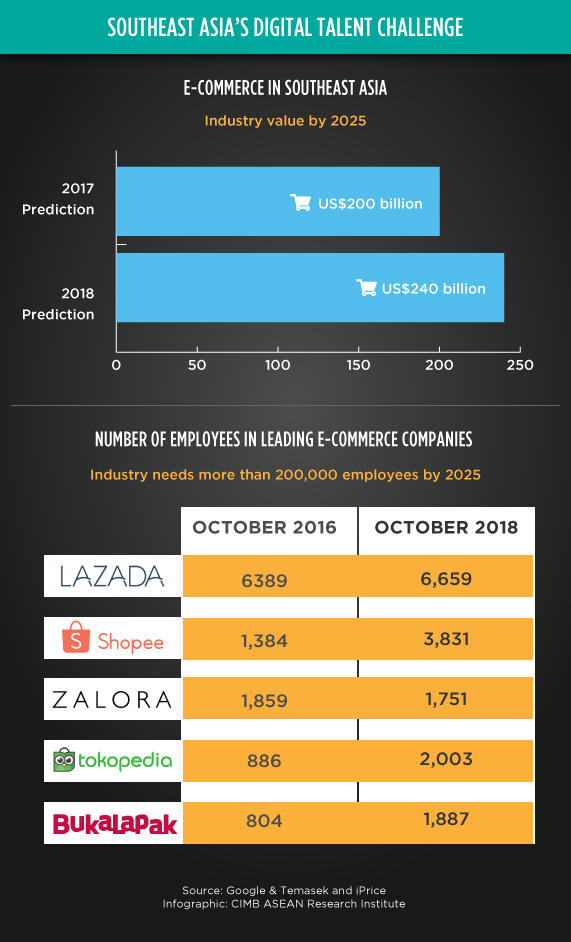 The state of e-commerce employment in Southeast Asia in 2018
(19 December 2018) Southeast Asia’s e-commerce sector needs more than 200,000 people by 2025 to support its exponential growth, but the region still faces a great shortage of highly-skilled professionals in technical roles such as software engineering, digital marketing, data science and product marketing. According to a study on e-commerce employment in the region by iPrice, e-commerce companies had the highest number of employees in operations and marketing, followed by engineering and IT in third and sixth place respectively. The study also found that top e-commerce platforms in Southeast Asia saw their workforce grow by an average of 808 employees each quarter between Q4 2016 and Q3 2018, largely spurred by an inflow of investments. Lazada leads the pack in number of employees as of October 2018 at 6,659 employees, followed by Shopee with 3,831 employees, Tokopedia with 2,003 employees, Bukalapak with 1,887 employees and Zalora with 1,715 employees.

Southeast Asia’s appetite for coal will help keep global coal demand stable
(18 December 2018) Global coal demand is projected to rise for a second consecutive year and remain stable for the next five years, according to the International Energy Agency (IEA). This demand is largely fuelled by strong growth in South and Southeast Asia, which will offset declines in Europe and North America. Coal remains an affordable and widely available resource in Asia, especially in India where demand has been growing at a rate of 3.9% per year. Significant increases in coal use are also expected in Indonesia, Vietnam, Philippines, Malaysia and Pakistan. According to the IEA, while many countries aim to phase out coal power plants, some countries in South and Southeast Asia have proven to be resistant to change as coal is looked upon to provide energy security and support economic development.

The rise of green bonds in Southeast Asia
(18 December 2018) 2018 was the year ASEAN finally caught on with the global trend of socially responsible investing, according to analysts in the region. This comes on the heels of regulations passed at the ASEAN Capital Markets Forum held in November 2017 which determined rules governing the qualification, certification and sale of green bonds. Governments, banks and renewable energy companies in Indonesia, Malaysia, Thailand and Singapore are among the issuers contributing to the sale of an estimated US$4 billion worth of green bonds this year. Thailand’s TMB Bank sold the country’s first green bond with a US$60 billion offering in June, while the Indonesian government issued its first US$1.25 billion green Islamic bond. In Malaysia, the government said it would offer grants to help offset the cost of establishing green Islamic bonds, and a renewable energy company launched a US$60 million green Islamic bond to help finance a solar power station.

ASEAN provides growth opportunities for Korean healthcare firms
(19 December 2018) Korean healthcare providers are looking for opportunities to fill gaps in ASEAN’s inadequate healthcare ecosystem, as they eye the region’s expanding middle class and growing purchasing power. According to a report by the Korea Bio-economy Research Centre under the Korea Biotechnology Industry Organization, Korea has exported over US$200 million worth of medical devices to ASEAN since 2013. The number of doctors per 1,000 people in ASEAN is 0.57 on average — a significantly low number compared to the Organization for Economic Cooperation and Development (OECD)’s average of 3.3 — thus presenting opportunities for Korean hospitals to enter the region. According to the World Bank, Indonesia had the highest medical expenditure among ASEAN countries, spending US$29.5 billion in 2015. Thailand came next with US$15 billion, followed by the Philippines with US$12.9 billion, Singapore with US$12.6 billion, Malaysia with US$11.5 billion, and Vietnam with US$10.9 billion.

Thailand hikes rates as Southeast Asia’s largest economies diverge on policy
(19 December 2018) Southeast Asia’s two largest economies are taking different interest rate paths against the backdrop of rising US rates, a rebound in emerging markets and weaker global growth prospects. The Bank of Thailand raised its policy rate for the first time in seven years in a widely expected move, lifting it from 1.5% to 1.75%. Thai central bank governor Veerathai Santiprabhob said that the central bank may raise rates and then pause, a view backed by its chairman. Meanwhile, Indonesia’s central bank is set to maintain its rate at 6% after an increase of 175 basis points since May to stem downward pressure on its currency. According to Bank Indonesia deputy governor Dody Budi Waluyo, Indonesia’s economy has performed well and economic gains have been complemented by efforts to reduce the current-account deficit to within a manageable threshold.

Malaysia and Singapore lead Southeast Asia in communications infrastructure
(19 December 2018) Singapore and Malaysia are ahead of their Southeast Asian neighbours in terms of communications infrastructure extensiveness, quality and connectivity, according to a PricewaterhouseCoopers (PwC) report. Mobile SIM penetration stands at 154% in Singapore and 136% in Malaysia. Further, the average mobile data speed in Singapore is 16.90Mbps, while the average speed in Malaysia is 3.16Mbps. The report also noted that the two countries are followed by Brunei, Thailand and Vietnam in terms of technological readiness.

Indonesia, EFTA sign long-delayed free trade agreement
(16 December 2018) Indonesia and the European Free Trade Association (EFTA) signed a pact to increase trade and investment between Indonesia and EFTA countries (Switzerland, Liechtenstein, Norway, Iceland) after almost eight years of negotiations. Thousands of products traded between the two parties will benefit from the elimination of tariffs and non-tariff barriers under the arrangement. Indonesian palm oil, fish, coffee and textiles will get greater market access in EFTA countries. In exchange, EFTA countries will gain better access for gold, medicine and dairy products. According to Indonesian records, Indonesia-EFTA trade was worth US$2.4 billion pounds in 2017 with Indonesia having a trade surplus of US$212 million.

Improving global macroeconomic conditions may spur Southeast Asian markets in 2019
(17 December 2018) Southeast Asian markets may enjoy better valuations in 2019 amid improving global macroeconomic backdrop despite gloomy growth forecasts and the ongoing US-China trade war, according to Thailand’s largest private asset management firm. As of now, valuations in most of the region’s markets have dropped significantly to considerably attractive levels. Prospects for improved valuations will depend on for instance, smooth elections in Thailand and Indonesia. On the other hand, analysts expect flattish growth trends in Malaysia and the Philippines, with the former focusing on narrowing the country’s budget deficit and the latter plagued by high inflation rates. Meanwhile, Vietnam is expected to grow strongly on the back of surging foreign direct investments and a stable dong.