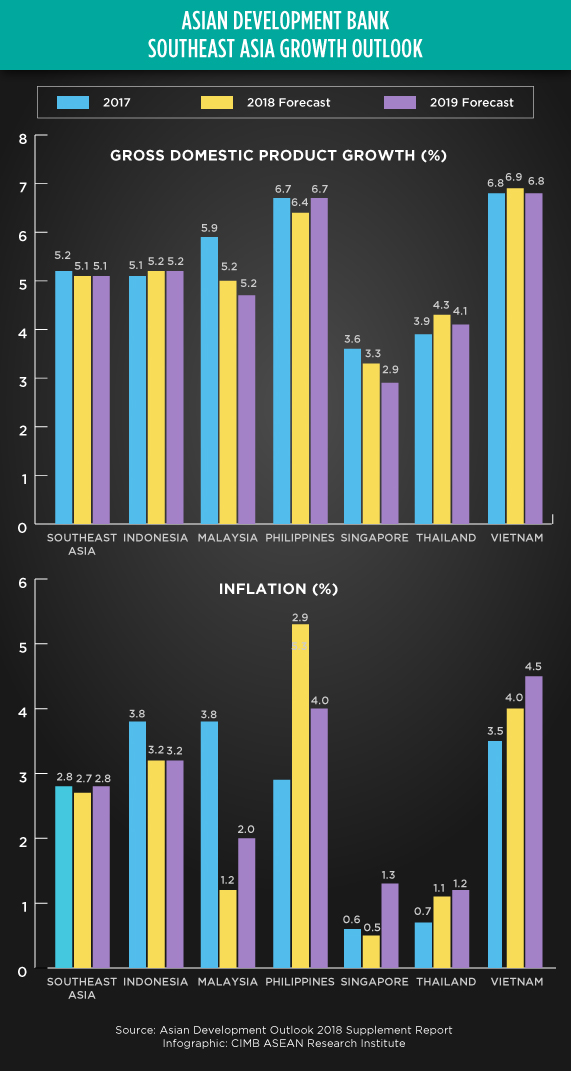 Asia to grow as expected in 2018 and 2019, trade war poses downside risks
(12 December 2018) Despite challenges brought about by external headwinds, the Asian Development Bank’s (ADB) growth forecasts for Asia remained unchanged at 6.0% for 2018 and 5.8% for 2019. This outlook is according to the ADB’s just released update which forecasts Southeast Asia’s growth to be maintained at 5.1% for 2018. However, the forecast for 2019 is lowered by 0.1 percentage point to 5.1%. According to the ADB, the unresolved trade conflict between the US and China remains as the downside risk to economic prospects in the region.

ASEAN to jointly regulate over-the-top companies
(7 December 2018) The ASEAN Telecommunications and Information Technology Ministers Meeting (TELMIN) held in Bali concluded with ministers agreeing to interface collectively with over-the-top (OTT) companies. At a joint press conference with other ASEAN communications ministers, Indonesian communications minister Rudiantara said that ASEAN members must unite to ensure that platform providers deliver added value to all member countries. For example, if a platform provider pays taxes in Indonesia, the company should also pay taxes in other ASEAN member countries. Further, ASEAN member countries will collaborate on regional cyber security efforts and data protection policies, such as through the development of the ASEAN Computer Emergency Response Team (CERT) to help facilitate real-time coordination and information-sharing on cyber threats among CERT member states and ASEAN dialogue partners.

Another solid year for Southeast Asian IPOs
(7 December 2018) Southeast Asian capital markets produced 135 initial public offerings which raised US$12 billion in the first 10.5 months of 2018, according to Deloitte. Vietnam accounted for 52% of the total funds raised with a total of US$6.2 billion as of November 15, far exceeding funds raised in previous years. According to Deloitte, Vietnam’s growth can be attributed to the government’s privatization drive, market reforms, strong investor interest and high GDP growth of 6.8% in 2018. Southeast Asian companies have also raised US$3.6 billion on overseas exchanges in the past five years, with Hong Kong being the most popular exchange.

S&P trims GDP outlook for ASEAN emerging markets
(13 December 2018) Standard & Poor’s (S&P) trimmed its growth outlook for Asia Pacific economies in the next three years due to factors such as the US-China trade war, depreciating currencies, rising oil prices, general delays in investments being made and monetary interventions by central banks. S&P projects that Indonesia, Malaysia, Thailand and the Philippines will see their combined GDP growth at 5% this year and the next, and increase slightly to 5.1% in 2020. S&P noted that while favourable demographic trends continue to buoy domestic demand in these economies, it lowered its growth forecast for the group due to reduced trade growth and weaker consumption and investment activity in some economies.

ASEAN connectivity projects offer lucrative partnerships
(10 December 2018) South Korea’s expertise and experience in infrastructure development, economic expansion and innovation could help ASEAN reach its full growth potential, according to experts at the ASEAN Connectivity Forum in Seoul. The secretary general of the ASEAN-Korea Centre said that Korea’s New Southern Policy was evidence of the country’s interest to deepen engagement with ASEAN, especially in the commerce sector. Seoul has established the Korea Overseas Infrastructure Ministers’ Meeting, hosted the first ASEAN-Korea Infrastructure Ministers’ Meeting and double its annual financial contribution by US$14 million in 2019 through the ASEAN-ROK fund. It also aims to raise US$100 million by 2022 to create the ASEAN-Korea Infrastructure Fund.

Thailand to lead implementation of ASEAN Smart Cities Network
(9 December 2018) Thailand will play a leading role in the implementation of the ASEAN Smart Cities Network (ASCN) encompassing 26 cities in ASEAN Member States during its term as ASEAN chair next year. According to the Thai digital economy and society minister Pichet Durongkaveroj, the programme has three key aims, i.e. improving citizens’ quality of life through equal access to technology and infrastructure, boosting economic competitiveness and work on a ‘no-one-left-behind’ concept as well as enhancing sustainability and environmental protection to mitigate disasters and the effects of climate change. Proposed projects in pilot cities will address issues such as traffic jams, tourist safety and solutions for agriculture productivity.

Indonesia has the highest capex on crude and natural gas projects in Southeast Asia
(11 December 2018) A report by GlobalData found that Indonesia has 23 planned and announced projects for the 2018-2025 period, making it the Southeast Asian country with the highest capital expenditure(capex) on planned and announced crude and natural gas projects for that period. A total of 49 crude and natural gas projects are slated to start operations in five Southeast Asian countries during 2018-2025, of which 21 are planned projects with identified development plans and 28 are early stage announced projects pending approval. Malaysia has the second highest capex with 17 upcoming projects, followed by Vietnam with seven upcoming projects. Cambodia and Thailand have one upcoming project each.

Malaysia’s M&A activities hit three-year low
(12 December 2018) The value of merger and acquisitions (M&A) in Malaysia hit a three-year low at US$11.4 billion in 2018, according to Duff & Phelps. The two largest M&A transactions in 2018 were done by the country’s sovereign wealth fund Khazanah Nasional Bhd, i.e. the sale of a 16% stake in IHH Healthcare Bhd to Japan’s Mitsui & Co for US$2 billion in November and a 30% increase of its majority equity interest in Turkish healthcare firm Acibadem Holding for US$705 million in October. Transaction volumes dropped to 338 in 2018, from 408 in 2017 with a value of US$17.5 billion. Further, capital raised via IPOs also recorded a three-year low at US$150 million for 22 listings in 2018, compared to US$1.6 billion raised from 23 IPOs in 2017. Despite higher volumes, transaction values in the private equity and venture capital sector also sunk to a three-year low to US$953 million.

Singapore’s economy to slow down in 2019
(12 December 2018) The latest Monetary Authority of Singapore (MAS) survey lowers the forecast for Singapore’s economic growth to 2.6% in 2019 from the 2.7% increase predicted earlier. For 2018, Singapore’s economy is expected to grow by 3.3% this year, slightly above the 3.2% forecast made in September. The report cited rising trade protectionism and the ongoing US-China trade conflict as key concerns. According to the Bank of America Merrill Lynch, 2019 will be a challenging year for Singapore, but strong domestic fundamentals and policies will help the country to weather a global economic slowdown.