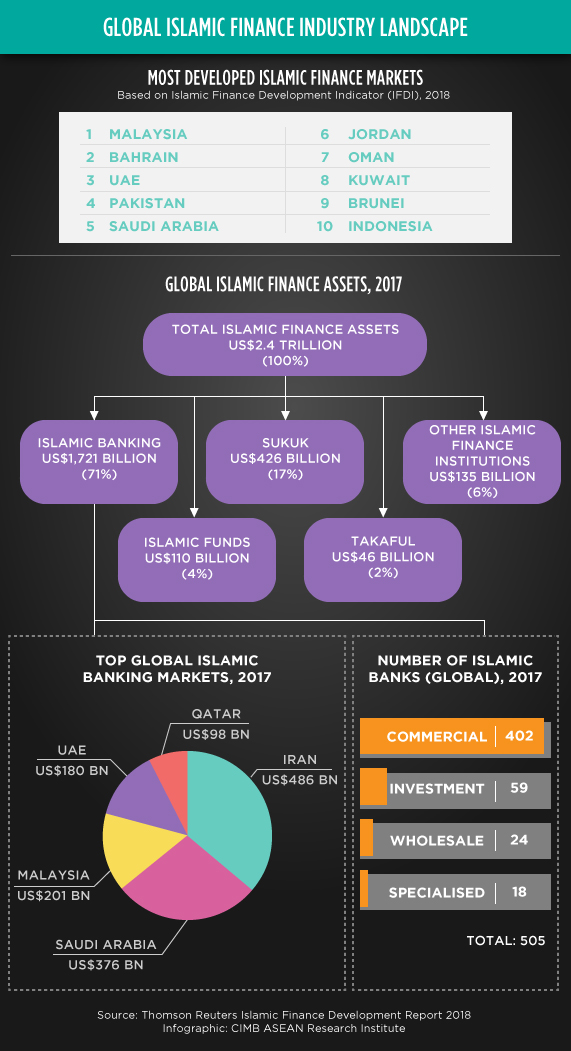 Brunei Islamic finance sector up 3%, maintains spot in top 10 performing markets
(1 December 2018) Brunei’s Islamic banking assets grew 3% from US$10.9 billion in 2016 to US$11.2 billion in 2017, according to the Autoriti Monetari Brunei Darussalam (AMBD). Based on the Thomson Reuters Islamic Finance Development Report 2018, these assets account for 64% of Brunei’s total market share of assets, thus helping the country maintain its placing as one of the world’s top performing Islamic finance markets. Brunei’s Islamic Finance Development Indicator (IFDI) score increased from 47 to 50, placing it in ninth place out of 131 countries, second only behind Malaysia in ASEAN.

SEC releases rules for ASEAN Capital Markets Forum Pass
(2 December 2018) The Philippines Securities and Exchange Commission (SEC) has published a set of proposed guidelines on the implementation of the ASEAN Capital Markets Forum (ACMF) Pass under the ASEAN Capital Market Professional Mobility Framework. The ACMF Pass, which has a two-year validity period, will allow recognized representatives from one home country to provide investment advisory services and issue research reports on financial products in participating ASEAN countries, i.e. Malaysia, Singapore, Thailand and the Philippines. The representatives can provide advice on shares, bonds and collective investment schemes.

Japanese megabanks bolstering services in Southeast Asia
(2 December 2018) Three of Japan’s largest banks — MUFG Bank, Mizuho Bank and Sumitomo Mitsui Banking Corp. (SMBC) — are increasing their services for local and Japan-affiliated companies in Southeast Asia amid forecasts that the US-China trade war will boost activity in the region. Mizuho Bank recently signed a memorandum of understanding with Thailand’s state-owned Export-Import (EXIM) Bank to help Thai companies expand their businesses in ASEAN. SMBC has increased its presence in Myanmar and Cambodia through investment outreach events held in collaboration with local authorities, and it also plans to grow its brand in Thailand by issuing baht-denominated bonds.

Government aims for 20% growth rate in the e-commerce industry in 2020
(4 December 2018) Malaysia is targeting an annual growth rate of 20% for its e-commerce industry in 2020, a 14.3% increase from 2017. The industry contributed US$20.64 billion to the country’s GDP in 2017 and it hopes to increase this to around US$24 billion in 2020. According to deputy trade and industry minister Dr. Ong Kian Ming, the government believes in the strength of the country’s digital economy and will continue to monitor e-commerce growth and development through implementing the National eCommerce Strategic Roadmap and National e-Commerce Council. Noting that there are only 5,000 small and medium-sized enterprises (SMEs) that are registered under Malaysia’s Digital Free Trade Zone (DFTZ), the deputy minister emphasized the need for greater participation in the DFTZ so as to ensure that the sector’s growth targets can be achieved.

Foreign banks allowed to set rates for foreign currency-denominated loans
(4 December 2018) The Central Bank of Myanmar will allow foreign banks providing services in the country to determine their own interest rate as long as the loans are denominated in foreign currencies. Kyat loans, however, must be conducted according to local regulations and interest rates must not exceed 13%. This development comes after the central bank’s recent announcement of allowing foreign banks to provide loans and other trade-related banking services in both foreign currencies and kyat. The central bank also announced that foreign bank branches will be allowed to expand in 2019.

Online vendors may soon have to pay taxes
(5 December 2018) Thailand’s Revenue Department plans to start collecting taxes for goods and services sold online, as part of its effort to tackle tax evasion in transactions made through electronic money transfers. The move was approved in an amendment to the country’s Revenue Code which will require banks and other financial institutions to report to tax authorities on money transfers totalling more than 400 transactions per recipient per year and transfers exceeding US$ 61,050 per recipient per year. The Revenue Department said that it has had difficulty imposing taxes on online vendors as most vendors operate and accept payments virtually, making it difficult to follow up on tax collection.

Phnom Penh logistics trade hub in the works
(5 December 2018) The Cambodian Ministry of Public Works and Transportation announced at the recent 6th ASEAN Connectivity Forum in Seoul that plans are underway to build a trade logistics hub in Phnom Penh. The ministry’s director general said that feasibility studies to develop the Phnom Penh Logistics Complex will commence in early 2019, supported by the Asian Development Bank (ADB). The hub will act as a long-term logistics solution to facilitate movement of inbound and outbound freight in order to increase the country’s trade competitiveness and position Phnom Penh as a regional trade hub in ASEAN. Further, the hub will help reduce truck-related traffic congestion and help develop a more environmentally-friendly freight transportation system.

EU tariffs on Myanmar, Cambodia rice unclear after undecisive EU vote
(5 December 2018) The European Union (EU) failed to arrive on a decisive vote (“qualified majority”) as to whether to impose tariffs on rice coming from Cambodia and Myanmar — a move proposed by the European Commission to curb the rise in imports in 2019. The Commission’s proposal was to set a duty of US$198.31 per tonne of rice in the first year, dropping to US$169.98 in the second and US$141.65 in the third year. The proposal is part of the trading bloc’s rice safeguard measures and is separate from its Everything But Arms scheme which provides both countries with preferential access to EU markets. In the absence of a clear vote by member countries, the Commission will make the final decision on the application of the safeguard measures.

Indonesia prepared for economic uncertainties in 2019
(4 December 2018) Indonesian finance minister Sri Mulyani Indrawati is concerned that trade tensions between the US and China may still impact the country’s economy. Speaking at the CEO Networking 2018 discussion forum in Jakarta, the minister emphasized the need to both take advantage of, and prepare for downside risk after the 90-day trade war ceasefire. Further, in anticipation of continued economic uncertainties, the Indonesian finance ministry and central bank have established policies to bolster the country’s resilience in 2019. These policies include maintaining the 2019 state budget deficit at 1.84% of GDP, maximizing its US$168.48 billion budget for government spending, and using tax-based business incentives. Meanwhile, Bank Indonesia will work to ensure that the financial sector has sufficient liquidity for business expansion, to deepen the financial market by developing domestic non-deliverable forward (DNDF) transactions and undertaking swap agreements, as well as to continue to relax housing down payments through its loan-to-value policy to boost the property sector.