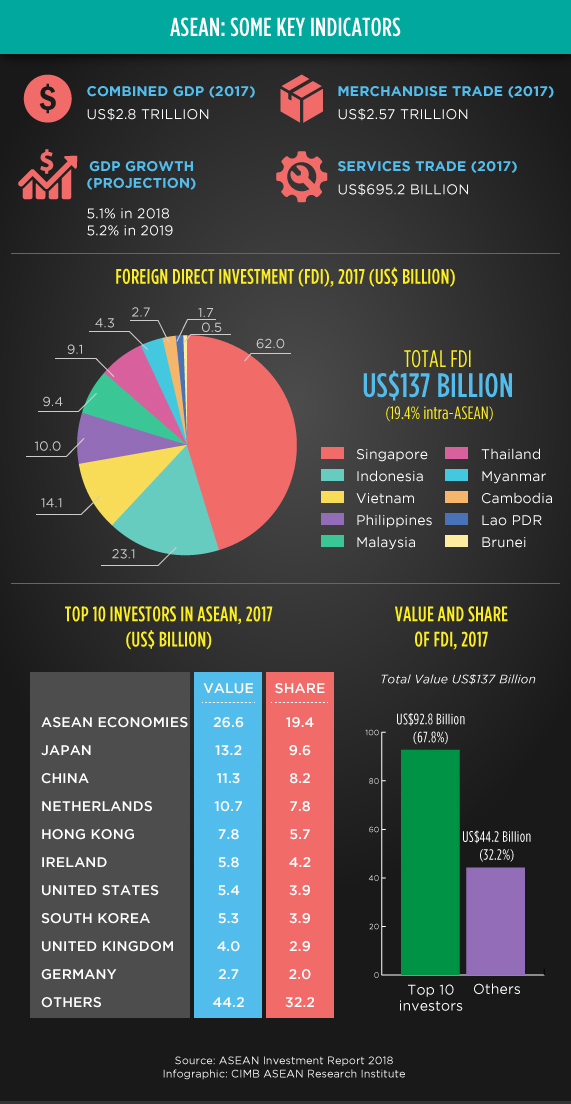 FDI flows to ASEAN hit all-time high in 2017
(26 November 2018) Foreign direct investment (FDI) flows to ASEAN Member States rose from US$123 billion in 2016 to an all-time high of US$137 billion 2017, according to the newly-released ASEAN Investment Report 2018 published by the ASEAN Secretariat and the United Nations Conference on Trade and Development (UNCTAD). The increase is fuelled by a rise in investment in eight countries, with Singapore, Indonesia and Vietnam receiving 72% of FDI inflows to ASEAN in 2017. Combined FDI flows to the four CLMV (Cambodia, Laos, Myanmar, Vietnam) countries also reached a record high with a 21% increase to US$23 billion, accounting for 17% of total FDI flows to ASEAN in 2017. Further, ASEAN’s share of global FDI to developing economies also increased from 18% in 2016 to 20% in 2017. Its share of global FDI to East and Southeast Asia increased from 31% in 2016 to 34% in 2017.

Port and shipping sectors undergo digital transformation
(27 November 2018) Technology will play a crucial role in port operations in the future and the port industry must catch up with other industries in adopting new technologies–this was the key message by Niam Chang Meng, chairman of Maritime and Port Authority of Singapore at the 44th ASEAN Ports Association meeting on November 27 in the city state. According to the chairman, technology is already disrupting the way the port industry operates and more port operations are being automated. He also foresees autonomous surface vessels in the longer term. Further, he stressed that the industry must be ready to face changes in the global operating environment such as new regulatory requirements and other challenges.

Regulatory cooperation needed to create a holistic insurance ecosystem
(29 November 2018) Bank Negara Malaysia assistant governor Adnan Zaylani Mohamad Zahid emphasized the need for cooperation among ASEAN insurance regulators in their adoption of a consistent approach to develop a holistic insurance ecosystem in Southeast Asia, especially with digitalization and changing consumer expectations. Speaking at the 3rd ASEAN Insurance Summit, the assistant governor also highlighted new areas of collaboration between regulators and the industry, particularly in managing risks brought about by technology and innovation. According to an annual insurance market survey, out of pocket expenses account for more than 50% of out of healthcare expenses in Cambodia, Myanmar, Indonesia and the Philippines. A reason cited for the insurance protection gap is the low level of financial literacy, where there is little awareness of the role and value of insurance.

Trade between South Korea and ASEAN to top $160 billion this year
(29 November 2018) In the first 10 months of 2018, trade between South Korea and ASEAN stood at US$132.1 billion and is expected to reach US$160 billion by year-end, according to the vice chairman of the Korean Financial Services Commission. This comes as Seoul looks to intensify cooperation with ASEAN under President Moon Jae-in’s New Southern Policy which aims to increase trade between the two sides to US$200 billion by 2020. According to the vice chairman, there are currently 162 South Korean financial companies in ASEAN and India, and this number is expected to rise. Further, the number of visitors between ASEAN and South Korea is also likely to surpass 10 million in 2018.

Taiwan plays up potential as gateway for ASEAN trade
(27 November 2018) Taiwan aims to position itself as a gateway for western economies which are looking to enter high-growth markets in Southeast Asia. This was made in a pitch by the director-general of the Taipei Economic and Cultural Office (TECO) in Vancouver, who touted Taipei as the ideal launchpad for British Columbia (BC) companies looking to expand beyond mainland China, Japan and South Korea, due to its long history of trade and investment in the region. The director-general also pointed out the similarities between Taiwan and Vancouver’s business profile, saying that small and medium enterprises make up more than 97% of Taiwan’s firms—a profile that is similar to that of BC and Canada—and Taiwan would therefore make an ideal first step to enter ASEAN.

Vietnam publishes draft new Securities Law
(29 November 2018) The Vietnamese Ministry of Finance and State Securities Commission (SSC) has published a draft version of its new Securities Law which includes changes on securities trading, corporate governance, share issuance and foreign ownership limits. Most notably, the draft provides that foreign investors will be allowed to have full ownership of a Vietnamese company that operates in a non-critical business sector, as opposed to the current cap at 49%. This applies to listed firms, equitised state-owned enterprises and private non-listed businesses. The draft which was published for public scrutiny in November 2018, will be revised and presented to the country’s legislative body in 2019.

Roadmap launched to encourage wholesale trade industry to go digital
(26 November 2018) More than 33,000 small and medium enterprises (SMEs) in Singapore’s wholesale trade industry can now leverage on the newly-launched Wholesale Trade Industry Digital Plan (IDP) to help them adopt digital technologies. SMEs go through three stages to help them identify and adopt digital solutions under the IDP: (i) streamlining operations and optimizing resources as a basic digital solution to remain competitive, (ii) connecting to the global trading ecosystem and gaining access to new markets such as by using business-to-business (B2B) e-marketplaces and online platforms for supply-chain financing and procurement, and (iii) identifying technologies to improve cross-border trading, involving the use of blockchain technology and artificial intelligence to enhance trade documentation processes, predict sales trends and automate sourcing and purchasing needs.

The rise of Singapore’s legal innovation industry
(26 November 2018) Dozens of international law firms are looking to set up shop in Singapore as the country positions itself as a state-of-the-art legal hub. To this end, Singapore’s Ministry of Law (MinLaw) has been providing incentives for foreign firms to set up and expand their businesses. Nine foreign law firms have been awarded a special license thus far, generating over US$291.68 million in total revenue in the 2016-2017 period. This is in addition to the more than 100 other international law firms from the UK and US already operating in the island state. Further, MinLaw, the Law Society of Singapore and Enterprise Singapore have invested over USD$2 million to help small and medium-sized law firms adopt technology. The Singapore Academy of Law (SAL) also organizes a two-year programme which includes a legal innovation lab, a legal tech accelerator and a virtual community to drive adoption of new technologies among law firms, legal departments and tech startups.

Indonesia and EFTA conclude IE-CEPA negotiations
(25 November 2018) A joint statement confirming the finalization of the Indonesia-European Free Trade Association Comprehensive Economic Partnership Agreement (IE-CEPA) between Indonesia and the European Free Trade Agreement (EFTA) was recently released at the EFTA Secretariat in Geneva. The joint statement was signed by Indonesian trade minister Enggartiasto Lukita and ministers from EFTA member countries Switzerland, Liechtenstein, Iceland and Norway. Under the agreement, Indonesia and EFTA will have greater mutual access for trade in goods, while Indonesia can also look forward to increased investment from EFTA member countries. According to the Indonesian trade minister, the agreement will undergo legal scrubbing and translation before it is signed in December.