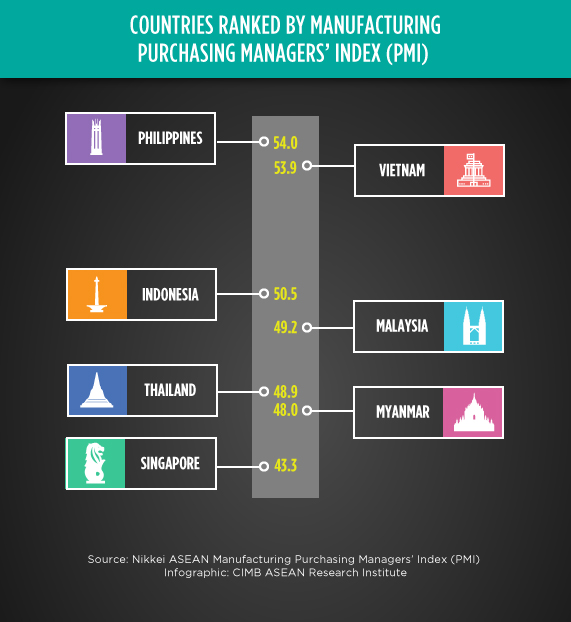 ASEAN manufacturing sector PMI falls below the no-change level in October 2018
(5 November 2018) The region’s manufacturing performance dipped to its lowest in 15 months from 50.5 in September to 49.8 in October according to data from Nikkei’s ASEAN Manufacturing Purchasing Managers’ Index (PMI) due to among other reasons, inflationary pressures. This marks the first time since December 2017 that PMI posted below the no-change 50.0 level. The Philippines topped the ranking with a PMI of 54.0, followed by Vietnam and Indonesia. Despite the drop in October, IHS Markit economist David Owen said that the outlook for ASEAN manufacturing businesses remained positive for the coming year.

Leaders gear up for the 33rd ASEAN Summit
(7 November 2018) ASEAN leaders will convene in Singapore on November 13 to 15 for the 33rd ASEAN Summit. High on the agenda are regional economic integration, cybersecurity cooperation and finalization of the Regional Comprehensive Economic Partnership (RCEP) trade agreement. The ASEAN Plus Three Summit, East Asia Summit and ASEAN Business and Investment Summit (ABIS) will also run parallel to the main summit. Organized by the ASEAN Business Advisory Council (ASEAN-BAC), this year’s ABIS will revolve around the theme ‘Building Tomorrow, Connecting Today’ which encapsulates the ASEAN-BAC’s goal of being forward-looking in approach and innovative in building towards a resilient ASEAN. At the end of the ASEAN Summit and related meetings, Singapore will hand over the ASEAN chairmanship to Thailand.

The case for RCEP as Asia’s next trade agreement
(6 November 2018) The 16 negotiating parties—including 10 ASEAN Member States—involved in the Regional Comprehensive Economic Partnership (RCEP) are racing to reach a conclusion by the end of the upcoming ASEAN Summit. Once finalized, the RCEP will provide a free trade area that covers 3.6 billion people and a GDP of US$25 trillion. Subsequently, global trade is expected to rise by 1.9% while global real incomes will increase by an estimated US$286 billion per year. However, much remains to be done given that only four of 21 chapters have been finalized thus far. Furthermore, the US-China trade war could complicate RCEP negotiations. Many Asian countries appreciate the need for strong coalitions to counter US dominance while there are also concerns that the conflict could shift Chinese exports towards the various Asian markets.

Korean SMEs eye Southeast Asian market
(7 November 2018) The Korean government has allocated US$13.4 million to help Korean small and medium enterprises (SMEs) break into the Southeast Asian market. Korea’s presidential adviser for economic affairs Kim Hyun-chul referred to the region as “a blue ocean” in his announcement of the proposed financial support. A task force comprising state-led banks and commercial banks will be formed before seeking parliamentary approval for the proposal. According to Korea’s presidential office, trade volume between Korea and ASEAN countries is expected to reach an all-time high at US$160 billion by the end of 2018.

Myanmar looks east for investments
(5 November 2018) Myanmar has established a 20-year investment promotion plan which centres on attracting foreign investment from Asian countries. According to Myanmar Investment Commission (MIC) head Thaung Tun, this “Look East Policy” is aimed at Japan, Korea, Hong Kong, Southeast Asia and India. Myanmar attracted a total of US$6.1 billion in FDI in 2017. The government has forecasted that this figure will reach US$220 billion in the next 20 years under the new Myanmar Investment Promotion Plan (MIPP) and has prioritized export and domestic import substitution businesses to alleviate the trade deficit.

SingPost launches new logistics platform to facilitate e-commerce
(5 November 2018) Singapore’s postal services (SingPost) announced two new digital platforms to enhance postal operations and provide seamless e-commerce transactions across the ASEAN region. The first platform (SmartPost) will digitalize the company’s postal operations by equipping its postal distribution workforce with a mobile application. Further, Near Field Communication (NFC) tags will also be used to help track and confirm receipt of registered mail. The second platform (LaMP) is an integrated last-mile platform which integrates courier services, parcel lockers and collections. This platform will provide customers with the option of receiving parcels through any last-mile delivery node in the network in any Southeast Asian country. According to SingPost’s chief digital officer, the company aims to be the last-mile delivery and urban logistics solution of choice for the region.

Central banks set up US$10 billion bilateral financial arrangement
(5 November 2018) The Monetary Authority of Singapore (MAS) and Bank Indonesia agreed to form a US$10 billion bilateral financial arrangement that will enable both sides to access foreign currency liquidity from each other. The agreement, which will be in place for a year, allows for the exchange of local currencies of up to US$7 billion and an enhanced bilateral US dollar repurchase arrangement of US$3 billion. According to Bank Indonesia governor Perry Warjiyo, the arrangement reflects the strengthened bilateral monetary and financial cooperation between Singapore and Indonesia, and indicates the commitment of the authorities of both countries to maintain financial stability amid uncertainties in the global financial market. MAS managing director Ravi Menon added that the arrangement will instil confidence among investors.

US$720 million budget for Industry 4.0 initiatives
(6 November 2018) Malaysia announced an allocation of US$720 million for an Industry Digitalization Transformation Fund established to accelerate the development of the country’s digital economy. The fund includes US$50 million to help businesses migrate to Industry 4.0 through a Readiness Assessment Programme. Also notable was a US$240 million allocation for a National Fibre Connectivity Plan, a five-year plan to enhance connectivity in rural areas. Finance Minister Lim Guan Eng hopes the fund will help expedite the adoption of smart technologies such as robotics and artificial intelligence in Malaysia.

Cambodia to boost clean energy use alongside coal
(7 November 2018) According to the World Bank, only 16% of the Cambodian population had access to power back in 2000 compared to 87% of villages and 73% of households that have access today. The country intends to ensure that by 2020, everyone is connected to the grid through hydropower, coal or solar energy. According to its Ministry of Mines and Energy, the government plans to adopt solar power systems to reach communities in remote areas. For example, a 10 megawatt solar plant was activated this year and a larger-scale 60 megawatt solar plant will be completed by the end of 2019.

Vietjet’s market capitalization exceeds that of AirAsia
(8 November 2018) Vietnam’s largest budget carrier Vietjet Aviation is now the second most valuable airline by market capitalization in Southeast Asia behind Singapore Airlines. The airline, which has routes to destinations in nine countries and territories, is currently deliberating additional routes to India, Russia, Australia and Europe. It also overtook Vietnam Airlines in domestic traffic in 2017. According to Vietjet head Nguyen Thi Phuong Thao, Japan Airlines will play a central role in its global expansion. Both airlines started code sharing domestic flights in October and are working on a code share arrangement for long-haul flights to the US.