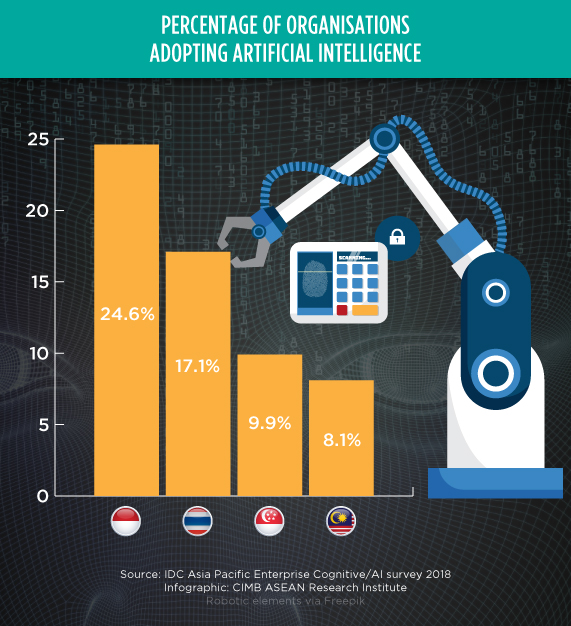 AI businesses on the rise in ASEAN
(29 October 2018) The Fourth Industrial Revolution offers expansive opportunities for artificial intelligence (AI) businesses in the region, who are racing to tap into this global market. The Singaporean government alone has committed nearly US$14 billion to research and development under its 2016-2020 national innovation plan. According to Statista, the AI market in Asia Pacific was worth US$450 million in 2017. Further, research firm IDC ranked Indonesia as the leading country in AI adoption, with 24.6% of organisations in the country adopting AI. Indonesia is followed by Thailand, Indonesia, Singapore and Malaysia in terms of AI adoption.

Indonesia plans US$10 billion waterfront airport
(30 October 2018) Despite opening a third terminal in 2016 with a fourth terminal expected in 2020, the Indonesian government is now laying plans for a new airport, which it seeks to fund through public-private partnerships. The new facility will be located around 15 kilometres north of the Soekarno-Hatta International Airport and is expected to comprise two runways, a passenger terminal and an aircraft maintenance centre. Soekarno-Hatta received 63 million passengers throughout 2017, up by 8% from 58.2 million in 2016. The International Air Transport Association (IATA) projects a rise to 242 million airline passengers in 2035.

Pacific trade pact to take off in December
(31 October 2018) The Comprehensive and Progressive Agreement for Trans-Pacific Partnership (CPTPP), once known as the Trans-Pacific Partnership, will come into force on 30 December 2018. Australia is the latest nation to announce its ratification of the trade agreement following Canada, Japan, Mexico, New Zealand and Singapore. With six countries on board, the pact will provisionally go into effect. The other five of the eleven countries involved are Malaysia, Vietnam, Brunei, Peru and Chile. The CPTPP is expected to lower tariffs, unify rules for business and provide greater market access for its member nations.

Malaysia approves investments worth US$19.2 billion
(30 October 2018) Investment in Malaysia’s services, manufacturing and primary sectors were up 17.7% in the first half of 2018 according to the Malaysian Investment Development Authority (MIDA). The agency approved US$19.2 billion worth of direct investments for 2,346 projects that are expected to generate 60,181 jobs. The services sector continued to account for the largest share of approved investments, contributing 63.5% through 2,025 projects which would create more than 33,970 jobs. The healthcare services subsector notably recorded a 282.5% spike in investment to US$263 million from US$70.5 million in the same period in 2017.

Philippine portal to eliminate trade data discrepancies
(28 October 2018) TradeNet, the Philippines’ national single window system for trade data, will become fully operational this December. According to its Department of Finance (DOF), automation of trade processes through the platform which will go live then will further reduce trade data discrepancy, improve revenue collectors’ capabilities and facilitate trade. According to the Philippine Statistics Authority, trade data discrepancy in the country declined to 33.1% in 2017 from 40.8% in 2015. The platform, which was initially launched in December 2017, aims to connect 66 trade regulatory agencies and 10 economic zones.

ASEAN endorses energy investment roadmap
(29 October 2018) ASEAN’s energy demand is expected to rise by nearly two-thirds from 2018 to 2040, and its member countries will require at least US$2.7 trillion of cumulative investment to meet this demand. To this end, ASEAN Member States inked a commitment to step up cooperation at the recent 36th ASEAN Ministers on Energy Meeting (AMEM) held in Singapore. The ministers also endorsed further developments in the areas of green building and natural gas. Further, ASEAN will work with the International Renewable Energy Agency (IRENA) to enable more renewable energy investment and deployment in the region as it pursues a target of 23% of primary energy from renewables by 2025.

Billions of coal assets in Indonesia, Vietnam and the Philippines risk being stranded
(29 October 2018) A report by Carbon Tracker concluded that it would be cheaper to build renewable energy plants in Indonesia, Vietnam, and the Philippines by the end of the next decade rather than continue operating existing coal-fired power plants. The London-based think tank said that as much as US$60 billion of coal power assets could be stranded in the next decade across the three countries as it foresees environmental policies tightening and the cost of renewable energy decreasing in the region. According to the International Energy Agency, coal is the fastest-growing energy source in Southeast Asia through 2040.

Myanmar businesses concerned by potential EU GSP withdrawal
(30 October 2018) Business groups in Myanmar expressed concerns over the European Union’s potential revocation of the country’s access to the Generalised Scheme of Preferences (GSP). The country currently benefits from the EU’s Everything But Arms (EBA) scheme, part of the bloc’s GSP. Six European trade groups co-signed a joint statement saying that the GSP withdrawal would greatly affect Myanmar’s garment sector, diminishing the livelihoods of nearly 400,000 women. According to U Ye Min Aung, vice chair of the Union of Myanmar Federation of Chambers of Commerce and Industry (UMFCCI), Myanmar would not be able to compete with other countries without the trade privileges.

Laos to offer incentives to attract investment in SEZs
(31 October 2018) The Lao government has directed its Ministry of Planning to improve business conditions and formulate better incentives to attract investments in its special and specific economic zones (SEZs). This comes after a study conducted by the Lao National Economic Research Institute (NERI) suggested that while Laos had the advantage of being strategically located in the centre of the region, it should strive to provide greater incentives to businesses in order to compete with special economic zones in neighbouring countries. The 12 SEZs currently operating in Laos has thus far attracted 503 local and foreign companies with a registered capital of over US$8.4 billion.